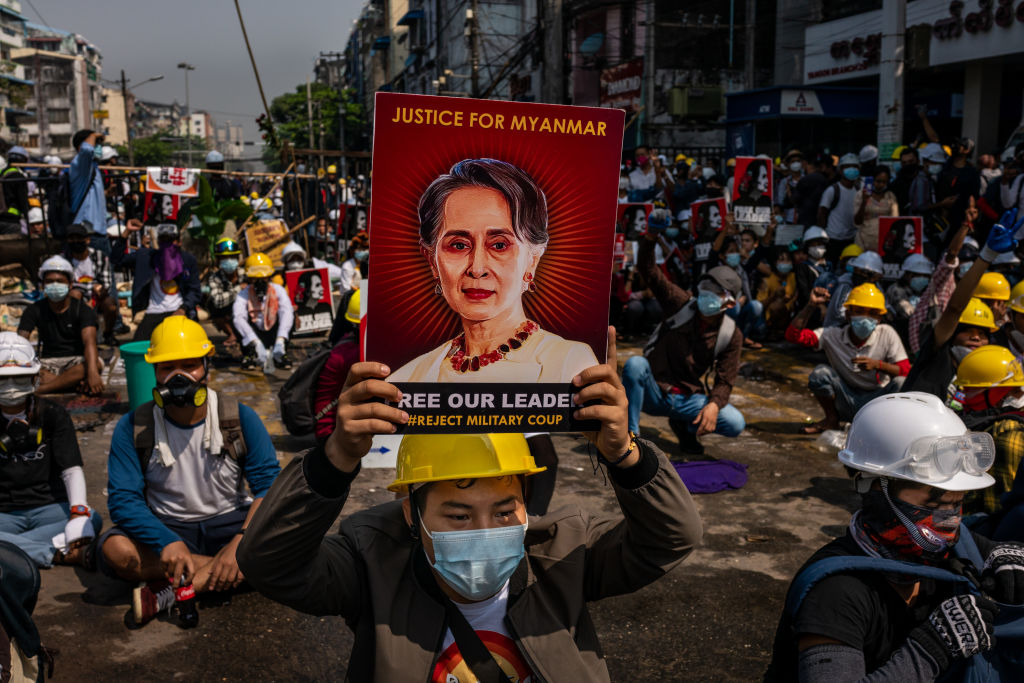 The so-called ‘Spring Revolution’, the caption of the military coup on 1 February 2021 in Yangon shows signs of nervous disorder due to an increasing opposition from the global community. Neighbouring countries like Thailand and Bangladesh are uneasy at developments. Multinational oil companies, USA-based Chevron, France’s Total and Australia’s Woodside Energy, have begun exiting field operations in the Rakhine Basin. Woodside that entered into a production sharing contract with the Myanmar Oil and Gas Enterprise, in a statement to the Australian Stock Exchange, revealed, “given the ongoing situation in Myanmar” it could no longer be involved in the drilling and exploration of the country’s offshore gas fields.

Myanmar’s economic scenario is bleak – “critically weak economy” that will rebound barely by just 1 per cent this year after shrinking by almost a fifth because of the combined effects of the COVID-19 pandemic and last February’s military coup, according to the World Bank. “The situation and outlook for most people in Myanmar continues to be extremely worrying,” said Mariam Sherman, the Bank’s country director for Myanmar, Cambodia and Lao PDR. “Recent trends of escalating conflict are concerning–firstly from a humanitarian perspective but also from the implications for economic activity”, she added

The economy shrank by 18 per cent between January and September 2021 amid nationwide anti-junta resistance, mass army-led displacement, urban and rural guerrilla warfare, COVID lockdowns, and the exit from the country of numerous foreign investors. Half of all companies told the Bank in a recent survey of disruption to their supplies of inputs and raw materials, blaming increases in costs, logistical problems and the falling kyat.

But Tatmadaw, the seat of the supreme command of Myanmar’s junta, that terminated the short-lived experience with democracy – a semi-democratic rule – by removing democratically elected leader Aung San Suu Kyi is almost certain to go back on its commitment to one-year state of emergency. General Min Aung Hlaing who led the coup on 1 February 2021and heads the military regime plans to build the biggest sculpture of a sitting Buddha in the world – part of his attempt to forge a legacy as a protector of Buddhism. The insular and paranoid junta, seeking to survive embarks on what may be termed as political Buddhism, aping Political Islam,

Aung Hlaing’s Buddhism is an antithesis to Buddhism whose first and most important principle is to abstain from killing. Quite expectedly, came a prompt rebuttal from 30-year-old monk Agga Wantha, who has been leading protests against the coup from Mandalay. ”Their Buddhism is a fake show, they don’t deserve to be called Buddhists. We don’t kill other people. What they are doing right now is all opposite of Buddhism. They are just saying that they are Buddhist but they are doing this just to get a hold of the country”

The coup at a time when mankind was reeling under the COVID-19 pandemic shocked the world. But members of the military government frantically keep trying to justify the coup by alleging widespread voter fraud in a November 2020 general election that was won by Aung San Suu Kyi’s National League for Democracy’s. NLD had massive victory by getting more than 80 per cent of votes, surpassing its electoral performance in 2015. Nearly 1,500 people were killed in a crackdown on the military’s opponents in less than a year after the coup.

The National Unity Government, opposing the military dictatorship has been collecting documents and evidence on atrocities, human rights abuses and war crimes committed by the junta and plans to open a case against junta perpetrators in a foreign court. In an interview with Myanmar Now, NUG’s deputy foreign minister, Moe Zaw Oo, demanded that the military council be punished in order to prevent future dictators coming to power, and offered reassurances that the NUG was not in any sort of negotiations with the coup leaders. “The thing about the Spring Revolution is that when injustice goes unpunished, more injustice is bound to happen. Why do coups keep happening in our country? It’s because the leaders of previous coups were not punished even slightly”, he said..

Between 1 February and 31 December 2021, there were 7,686 clashes on civilians in the country, a 715 percent increase from the same period in 2020, according to the advocacy groups Progressive Voice and Alternative ASEAN Network on Burma (ALTSEAN-Burma) that documents resistance to Burma’s illegal military regime. Myanmar is on par with the most brutal conflicts today, comparable with Syria (7,742), and higher than Afghanistan (6,481), Yemen (6,270), and Iraq (3,732). The Myanmar air force carried out indiscriminate airstrikes on civilian areas in at least 26 townships, according to a mid-January update from the NUG. Two NUG ministers told presspersons gathering information on crimes committed by the junta in Chin State would be submitted to the International Criminal Court and the International Court of Justice.

The United Nations human rights chief Michelle Bachelet has urged world leaders to ramp up the pressure on Myanmar’s military rulers to cease violence against Myanmar’s own people and press for restoration civilian rule demands quick restoration of civilian rule keeping in mind the committed one-year tenure of so-called state of emergency.

Attuned to the sentiment of rights groups, the UN body makes it clear that pressure on bringing the matter to justice is to be kept up “If we resolve the current issues without taking any action against them, it’s inevitable that another dictator is going to stage a coup. Therefore, we have to end their impunity”, Bachelet stressed.

The Tatmadaw has been prioritising the task of building an isolated and segregated information ecosystem to enforce organisational unity among its members. Senior operatives skilled in psychological warfare routinely disseminate disinformation and conspiracy theories in Facebook groups frequented by soldiers. Even before 1 February 2021, generals regularly incited ethnic violence against Muslim Rohingyas. Such viral disinformation campaigns and online coordination sparked mass killings and genocide against the group.

Junta’s friends are China and Russia. They blocked the UN resolution condemning the coup and block any arms embargo against the ruling junta, a major customer for their weapons, according to media reports. Civil rights bodies and NLD-backed masses are developing a chagrin towards the two powers. (IPA Service)