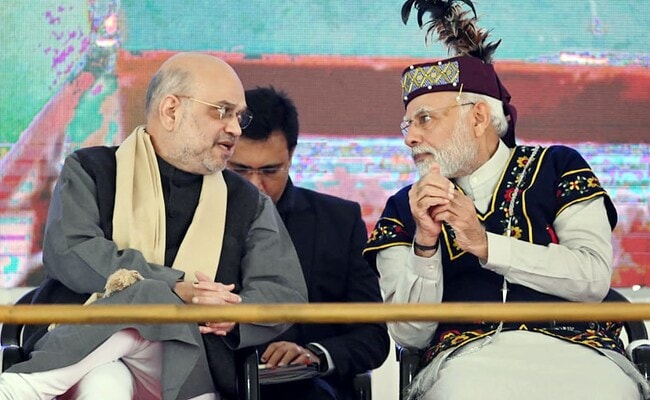 Prime Minister Narendra Modi, in Meghalaya’s Shillong to participate in the golden jubilee celebration of the Northeastern Council, said his government has given ‘red card’ to all hurdles in northeast India, like underdevelopment, corruption, unrest, and political favouritism.

Addressing the audience in a football ground, the PM used the sport’s references to get his message across.

“In football, when someone plays against the spirit of sportsmanship, they are given a red card and sent out. In the same way, in the northeast in last 8 years, we have given red card to all hurdles like underdevelopment, corruption, political favouritism, and unrest,” he said.

The PM said that his government is focussing on development of sports in the northeast, with the country’s first national sports university and 90 major sports projects underway in the region.

“It’s a coincidence that when today there’s a football world cup final to be held, I am here in Shillong holding a rally in a football field amidst football fans. There (in Qatar), a football competition is on and here we are on a development competition,” he said.

“Today the world cup is in Qatar, and we are cheering for foreign teams, but let me assure you that the day is not far that we will host such global sporting events and our tricolour will fly high, and we will cheer for our own team,” he added.

Launched in August 2020, the Krishi Udan Yojana scheme aims to assist farmers in transporting agricultural products, on both national and international routes, so that it improves their value realisation.

On telecom connectivity, the PM said the northeast will get six thousand mobile towers, and the Centre is spending Rs 5,000 crore for this.

The PM spoke about various development schemes, inducing the 150 upcoming Eklavya model schools, and focussed schemes for the northeast like the Parbat Mala scheme and the PM-DevINE project. He also took a swipe at earlier governments at the Centre.

“The previous governments at the Centre had a ‘divide’ northeast approach, and we have a ‘divine’ approach for the region,” he said, adding that his government is working towards ensuring peace by resolving conflicts in the region.

The PM also referred to his Vatican visit last year.

“Last year, I went to Vatican City and met the Pope. I invited him to India, and that meeting has had a great impact on me. We discussed how unity of humanity is important for the human race. We are pushing the politics of peace and development, and the tribal community is greatly benefitting from this,” PM Modi said.

PM Modi earlier attended the golden jubilee celebration of the North East Council (NEC) and laid the foundation stone of multiple projects in a public function in Shillong.

In a public function at in Shillong, the Prime Minister inaugurated and laid the foundation stone of multiple projects worth over Rs 2,450 crore.