Political Situation Is Hotting Up For Lok Sabha Elections In 2024 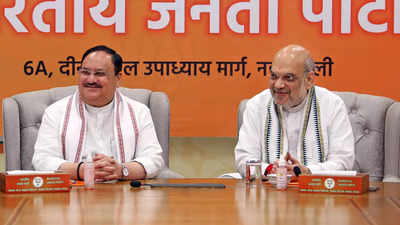 Political parties in India have begun advance planning for the 2024 Lok Sabha polls from now on.  The ruling NDA and the Opposition parties have been vying each other in their preparations. They are making and remaking strategies according to the political climate. The stage is set for the next general elections in 2024.

On a parallel basis, regional parties might threaten the BJP. The ruling BJP plans a hat trick for Prime Minister Narendra Modi while the Opposition is trying to unseat him.   BJP is talking   of a 350 plus target in 2024 while Nitish Kumar and Mamata are confident of defeating the BJP convincingly in the  Lok Sabha polls  by uniting all opposition   parties.

The Opposition dreams of unity but has a decisive disadvantage as it is still searching for a challenger to Modi. This lack of a prime ministerial candidate may hurt the Opposition— and this question of Modi versus who the BJP will play up.

With Mamata Banerjee in West Bengal, Nitish Kumar in Bihar, K Chandrasekhar Rao, MK Stalin in the south, and Arvind Kejriwal in the north, the BJP has formidable contests from different regions. There are more than 200 seats in the opposition strongholds. Himachal Pradesh and Gujarat vote later this year, and next year six key states — Karnataka, Tripura, Telangana, Madhya Pradesh, Rajasthan, and Chhattisgarh — go to the polls.

The BJP is yet to conquer the southern states (129 seats). While Aam Admi Party chief  Kejriwal takes on the PM on the corruption issue, others plan to corner the BJP on price rise and unemployment.

Secondly, right or wrong, the BJP  is clear about its ideology,  has a compelling narrative and poll preparedness, active cadres, and huge finances to fight the poll. Modi has the government machinery and welfare schemes and works to show while the regional satraps are pretty strong in their states.

Modi has not only kept his flock together but, despite criticism,  has also broken other parties and lured them into BJP. More importantly, he has fulfilled the core agenda of the Sangh Parivar, like Ram mandir, removal of Article 370 in Kashmir, and Triple talaq. He is likely to take up the issue of a uniform civil code soon. All these will keep his committed voters intact.

However, the recent Parliamentary Board revamps and J.D. (U) exit in Bihar last month have triggered some unrest within the BJP. Still, leaders bank on BJP’s ability to make course corrections. The BJP also needs to get more allies.

The party has begun aggressive preparations for the general elections. It held a meeting recently in Delhi to draw a blueprint for strengthening its position in 144 Lok Sabha weak constituencies. The party also proposes to focus on the 70 Lok Sabha seats it never won.

On the other hand, the Opposition is not coherent and is a mixture of different ideologies. They all must adopt a give-and-take posture. While regional leaders have performed well in their respective states, they must work out a common minimum programme acceptable to all partners.

The Samajwadi Party, a solid regional party in the U.P., focuses on strengthening its organisational structure. Party chief Akhilesh Yadav has already declared that he was not planning to go for a coalition with Congress or the BSP but continue with the smaller parties like Rashtriya Lok Dal. On the other hand, U.P. chief minister Yogi Adityanath has targeted 75 seats for the BJP, which has 80 Lok Sabha seats.

The BSP has launched a massive membership drive with a target of making 75000 members from each assembly segment as the first step. BSP chief Mayawati has been facing defeat after defeat in the past decade but has a solid Dalit vote bank   still..

Modi will have ten years of anti-incumbency behind him, but BJP depends on Modi’s magic. But there are many questions, like will Modi perform a hat trick? Will the Opposition unite? Will Rahul emerge as a successful challenger? Whom will the first-time voters prefer?

In politics, one week is said to be long. We have 18 months to go before the 2024 polls. Nearer the elections, the picture will become clearer. Till then, the political pundits are whistling in the dark. (IPA Service)