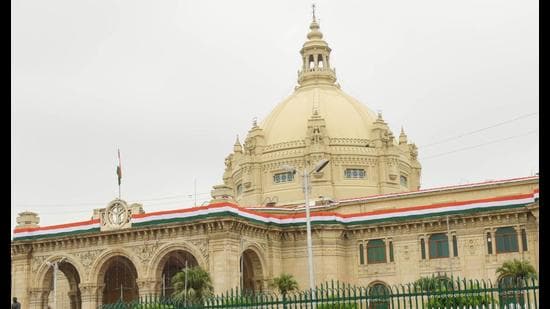 The rising COVID-19 cases and similar virulent, no holds barred election campaign has compelled the Election Commission of India to announce the Legislative Assembly election in Uttar Pradesh in as many as 7 phases between February 10 and March 7, 2022. Political sand-shifting on the ground level is an additional factor necessitating repositioning for both the ruling BJP and the opposition, the former has the highest stake and the latter the biggest hopes.

Political parties have already been in election mode in the state for several months now, and they have been engaged in no holds barred election campaigns. Congress’s election campaigns are most surprising in terms of unprecedented gatherings. Samajwadi Party has become most hopeful of wresting the seat of power from the ruling BJP. The hopes, of both the Congress and SP, seem to be so high among their leadership that they are prevented to have an alliance until now. BSP seems to be rowing the political wave on its own, and entry of AIMIM and AAP in the electoral battlefield completes the picture of disunity of the opposition. It gives, but only a little comfort for the BJP, because the party’s stakes are very high this time, which sharp decline of its own political prospects.

It is in this backdrop, both the ruling BJP and the opposition in the state are trying their best to reposition themselves. If some sort of unity is established among the opposition, either in the form of pre-poll alliance or seatwise strategic arrangement, the ruling BJP will be in great trouble to retain its power in the state, in spite of the seven phase election and greater restrictions on account of COVID-19 spread, which may greatly reduce the polling percentage, a scenario in which cadre based political parties are most likely to gain the most.

The huge crowd in the political rallies of the Congress and the SP is indicative of the fact that large number of people are not happy with the ruling BJP and might most probably vote for the opposition. However, most of them are common people, not the party cadres. Therefore, at this point of time both the Congress and the SP are searching, though separately, for the ways and means, through which the huge crowds in their political rallies could be translated into votes in their favour.

Conducting elections in seven phases would be easier to handle for the election commission. Election in a range from 54-61 assembly constituency and only 9-11 district in each phase is a wise decision. However, for free and fair election, the election commission would need to maintain extra vigilance on account of expected election violence this time on simple theory that greater the stake and hope, greater the possibility of violence, especially when political parties are resorting to communal or caste hatred, and have been rising their pitch higher and higher.

One simple modus operandi of the cadre based political parties are that their voters poll in large numbers during the first half of the polling time, and then they start creating trouble on polling booths. When situation becomes tense the common people avoid even going near the booth, and thus vote percentage of common people substantially reduced. Ensuring free and fair poll will therefore be crucial, at a time when most opposition political parties have smaller cadres than the ruling BJP, though opposition leaders have been attracting huge crowds in their political rallies.

All the political surveys held since September 2021 have shown a steady decline in the political fortune. BJP on its own had won 309 seats in the 2017 assembly election with 39.67 per cent of votes. NDA altogether had won 325 seats, with vote share 41.3 per cent. Pre-poll surveys are predicting a fall of about 3 per cent in the vote share of the NDA, which many translate into only 212-230 seats for the NDA. In a house of 403, NDA needs only 202 seats to remain in power, and thus it is being predicted that BJP will retain power. However, the prospect of losing almost 100 seats has made the BJP most apprehensive about the final outcome of the election, and they are not sparing any stone unturned to stop the continuing fall.

On the other hand, the surveys have been prediction SP and its alliance partners to win seats in the range of 137-152, up from 47 seats that the SP has won in 2017 election. Only a little less than the number of seats the BJP or NDA may be losing. It is in this backdrop, SP has very high hopes but is clearly falling short of 202 seats to wrest the seat of power in Lucknow from the BJP. In terms of share of votes, SP alliance is set to gain 34.4 per cent of votes up from SP’s vote share of only 21.82 per cent, according to the latest survey.

BSP had considerable political base in the state which had got 22.23 per cent of votes and 17 seats in 2017 election. This time the party has been predicted to considerably lose its vote share and seats. However, in case of strategic voting by some communities, they can retain dozen of seats. AIMIM may dent into Muslim votes and may harm the prospects of the BSP or SP. Entry of AAP may also cause split in opposition votes. Opposition unity will thus be the only hope for the opposition, and their disunity is the only hope for the BJP. (IPA Service)

PM Now May Opt For Any Strategy To Garner Electorates Sympathy In State Polls
Posting....