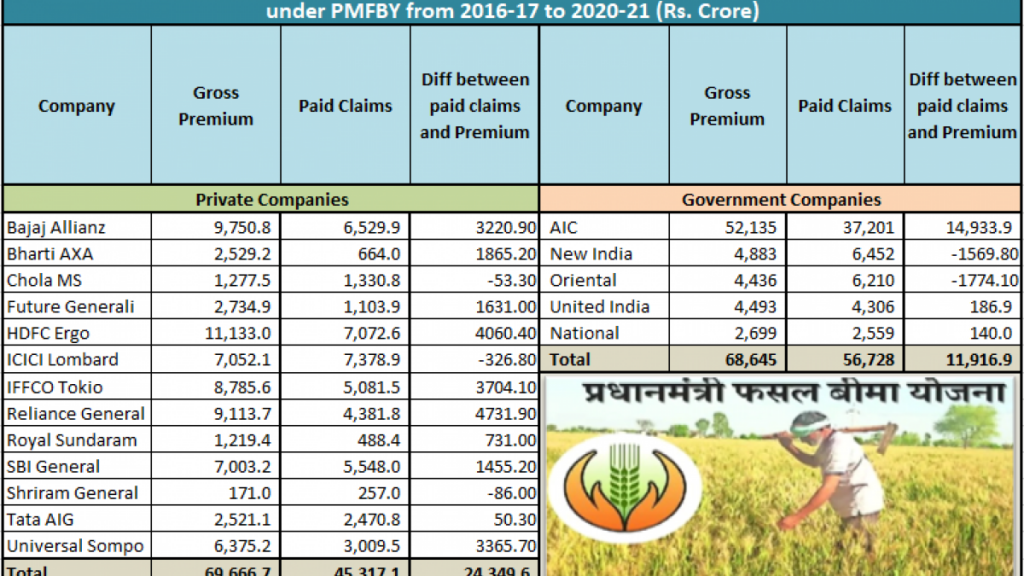 Not a single day passes without media reporting suicides committed by farmers in rural India. Crop failure due to drought, untimely and excessive rains and other weather calamities along with the acute deprivation and unpaid debts are some of the major causes forcing farmers to end their life. There is long history of kisan organizations waging struggles demanding payment of compensation for crop damages. When Prime Minister Narendra Modi introduced the Prime Minister Fasal Bima Yojana (PMFBY), it was widely welcomed. However, the implementation of the crop insurance scheme, instead of providing succour to the distressed farmers, benefited private insurance companies hugely.

Binoy Viswam, member of Parliament in his recent letter to the prime minister described how the claims of insured farmers for crop damage were ignored and various private insurance companies pocketed huge profits. He cited a letter written by Union minister Dharmendra Pradhan to Union minister for agriculture and farmers’ welfare where he described his sordid experience in detailing how farmers in Odisha were denied by private insurance firms the just compensation during Kharif 2021. The CPI MP requested the prime minister to conduct CAG investigation on this scam.

What happened in Odisha is just a tip of an iceberg. In fact, all over the country implementation of PMFBY is so opaque and became unpopular with farmers across the country. In 2016, at the beginning of the scheme, nearly 30 percent of farmers subscribed to the scheme by paying a hefty Rs 9,000 crores from 21 states. However, by 2021 a mere 18 per cent of farmers subscribed, despite the fact that it is mandatory for all crop loan borrowers from banks to get insured under private insurance companies. Not satisfied with its performance, Telangana, West Bengal, Gujarat, Maharashtra and some other states refused to contribute towards premium and withdrew from the central scheme.

Over the last five years, as a result of procedural hurdles in settlement of claims, the coverage of the scheme has declined. For example, over the five-year time span, the number of farmers covered has come down by29 per cent during Kharif and 33 per cent during Rabi.

The insurance companies paid only Rs 87,320 crores to the farmers against the latter’s claims totalling Rs 92,954 crores whereas 90 per cent of the public sector insurance firms have settled most of the claims, often incurring losses. It is the private insurance companies that have fallen short of settling claims, profiting from the scheme by 60-70 per cent. For example, Bharti AXA profited to the extent of 72 per cent, Reliance 59 per cent and Future 61 per cent.

Often the insurance companies after receiving claims from farmers take several months and crop seasons to assess the crop loss and pay compensation. Although it is mandatory to use drones and other technological help to complete crop cutting trials for loss assessments, companies delay for months to clear the submitted claims. Having no capital to invest on cultivation, small farmers are pushed into a never- ending debt cycle. Besides, tenant farmers are not eligible to receive bank crop loans, PM Samman aid or insurance compensation. In states like Andhra Pradesh, Telangana, West Bengal and Maharashtra tenant farmers constitute nearly 40 per cent of cultivators.

The farmer claims should be cleared within two weeks after their submission. Union agriculture ministry should immediately constitute a committee with participation of farmer unions to process the farmers’ claims and monitor the irregularities of insurance firms. As the performance of private insurance companies is flawed, the total business should be entrusted to public sector insurance companies. Government should refer to CAG to audit the financial irregularities in payment of compensation to farmers. (IPA Service)