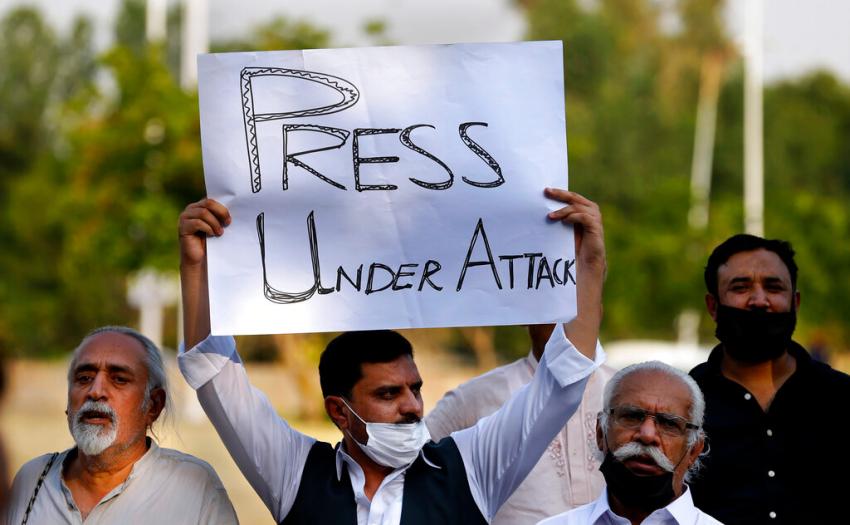 The journalists’ community of Pakistan and opposition parties are on the same page in condemning the ordinance on amending The Prevention of Electronic Crimes Act, 2016 and the Election Act by the Pakistan Tehreek-i-Insaaf government describing the promulgation as a bid to “muzzle the freedom of expression” and “allowing ministers to use state resources for their election campaigns while in office”.

President of Pakistan Dr Arif Alvi had promulgated an ordinance on Sunday proscribing online public defamation as a cognisable and non-bailable offence plus increment of jail term for defaming any person or institution from three years to five years. Promptly leading media bodies such as All Pakistan Newspapers Society, Pakistan Federal Union of Journalists and Council of Newspaper editors in a joint statement vowed to protest in unison against the ‘draconian’ ordinance. “All the stakeholders, including the media community and civil society, have been agitating for withdrawal of black clauses in PECA 2016 that are against civil liberties and basic human rights ensured in both the UN Charter and the Constitution of Pakistan, but it appears that the government is now making the laws more regressive in the name of dignity and security of institutions”, it said firmly.

It is time for all media, journalists, civil society and political parties to register their protest against ordinance and block it in parliament for saving democracy and freedom of expression, in order to prevent Pakistan’s further slide in international media freedom indices. Saner voices, implicitly addressing the academia, should also join the protest, the media bodies stated.

The judiciary has pushed the Prime Minister Imran Khan Niazi to back foot on Wednesday  as the Islamabad High Court suspended Section 20 of the Prevention of Electronic Crimes Act Ordinance 2022 stating that individuals cannot be arrested by the government under the said section of the law. The HC, headed by Chief Justice Athar Minallah heard the PFWJ against the ordinance and  directed the attorney general to appear in the court   with a detailed record from the Federal Investigation Agency whose director general the interior secretary would be held accountable if the agency violated its standard operation procedures to be submitted to the court.

The Supreme Court Bar Association president Ahsan Bhoon condemned the PECA (Amendment) 2016 ordinance and disclosed that SCBA would challenge its promulgation in the court. Through the amendment ‘the ruling elite had once again launched a vicious agenda to cut throat its political opponents and to silence those who believe in freedom of speech, opinion, and expression, so as to hide its insane and continuous failures,” SCBA observed in a press communiqué.

The opposition and the media-combine have been morally encouraged by the Human Rights Commission of Pakistan which rejected the amendments in the PECA and demanded that the ordinance be rolled back right away. HRCP is particularly worried about the provision ‘non-bailable’ – a clearly undemocratic sign, feared to be targeted against critics of the government and state institutions will be targeted through this legislation, it stressed.  The opposition parties have announced that they would be challenging the PECA ordinance at every forum, asserting that this is an attempt to clamp down on dissent and silence the opposition, media, civil society and to prevent criticism on government policies frequently debated on social media platforms.

Pakistan Peoples Party leader and senator Sherry Rahman tweeted, “Tabahisarkar has prorogued parliament to pass a slew of presidential ordinances which would give their ministers the unprecedented ability to misuse state resources for campaigning for elections while in office. In its bid to shut down dissent even further the Govt is using another presidential ordinance to amend cybercrime laws that will be sweeping and draconian in scope. Make no mistake, this is not about protecting the vulnerable from cyber predations; quite the opposite..Pakistan Muslim League (Nawaz) vice-president Maryam Nawaz Sharif tweeted ‘“Whatever laws this government is amending are meant to silence the media and the opposition but these laws are going to be used against [PM] Imran & Company”.

The Pakistan People’s Party Parliamentarians and PML(N),after a meeting between PMLN President Mian Shehbaz Sharif and PPP head Asif Ali Zardari at Bilawal House   issued  a joint declaration  which announced that all-out efforts would be made to rid Pakistan of PTI government in accordance with the aspirations of people. It condemned the amendment to impose curbs on the media.,

According to the Attorney General for Pakistan Khalid Javed Khan said, the PECA Ordinance would be a draconian law only if it was implemented as it is. “The PECA (amendment) ordinance will be draconian if it will come into force as it is… This law will be regulated for enforcement. As if to pacify the raging dissent, he added “The amendments will not come into effect retroactively.” (IPA Service)