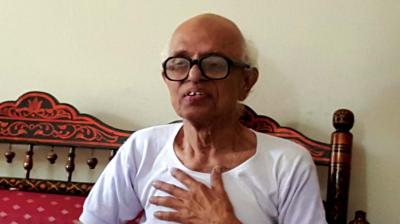 Com PK Balakrishnan Nair, popularly known as Balan, the erudite librarian at Ajoy Bhavan, the CPI headquarter, passed away in New Delhi  on July 20 at a local hospital after a period of illness. He was 82. He had a fall in his house recently and got multiple fractures on his left side, and was being treated in the hospital. He was brought back home but soon his health deteriorated and he died while being taken to the hospital.

Binoy Viswom said in his condolence that Com Balan was officially the librarian in Ajoy Bhavan but was much more than that. He was a moving encyclopaedia of CPI history, who has been unsung hero of the Communist movement, who had seen generations of Communist leaders. Alan was born in 1940 in Kunnoor, Kerala, in a family of established Communists. He formally became a party member in 1958.

Balan has been the librarian of CPI Library at Ajoy Bhavan for more than five decades. He was associated with the work of collecting and copying the documents of history of CPI, headed by Dr G Adhikari, who got several volumes of it published. Balan did lot of work on the microfilm reader in the CPI office when it was in the RPD Bhavan (PPH house) in Jhandewalan. Dr Adhikari’s research unit used to be located in the PPH building in the late 60s-early 70s.

All the books and research materials were shifted to Ajoy Bhavan after its construction was completed in 1970. Since then the materials, books and journals of the history of Communist, workers’, peasants’, youth, student, women’s etc movement grew rapidly. Com Balan practically became the custodian of this rich collection of books and materials. Research scholars and students from far and wide including from abroad keep coming to consult this rich collection.

Balan worked under and in cooperation with generations of CPI leaders in Asaf Ali Road office and Ajoy Bhavan, such as PC Joshi, BT Ranadive , S A Dange, EMS Namboodiripad ,Ajoy Ghosh, C Rajeshwara Rao, Dr Gangadhar Adhikari, Mohit Sen, Bhowani Sen, Indrajit Gupta and many others. As a result, he could collect lotof  oral and printed information about the incidents and events in the Communist and related movements. He wrote several interesting and useful articles, books and booklets including the compilation of party congresses titled ‘Communist Party of India: At a Glance’, which is a collection of details about the office bearers elected at various congresses. He wanted to write his reminiscences of party history as he saw while working within the CPI.

He used to take dictations from and interact with such leaders as PC Joshi, Ajoy Ghosh, C Rajeswara Rao and others. He wanted to jot down all the important details. Under his guidance CPI library grew into a very useful library on this subject. The party drew liberally on the materials and photos available in the library whenever a party congress was held or some important event, such as foundation day etc was held.

Com Balan came to Delhi from Kerala as a young whole-timer of the party in roughly the middle of the 1950s. Since then he remained an inalienable part of the central party apparatus, helping work of the central CPI office. He was very simple and humble and never ran after any position and post He was elected secretary of the PHQ party branch on several occasions. He saw with his own eyes the attack on CPI Headquarters in Asaf Ali Road in 1963 by the Jan Sangh goons. He just escaped being fatally attacked.

During the recent lockdown he had an attack of Covid, from which he recovered, but suffered a lot. In his demise, the CPI and the Left movement has lost a tireless worker for keeping the rich  source of the communist movement and the workers struggle in the country. (IPA Service)

Follow us on
Up Next: GST On Food Will Further Add To Malnutrition Among Indian Poor
Posting....