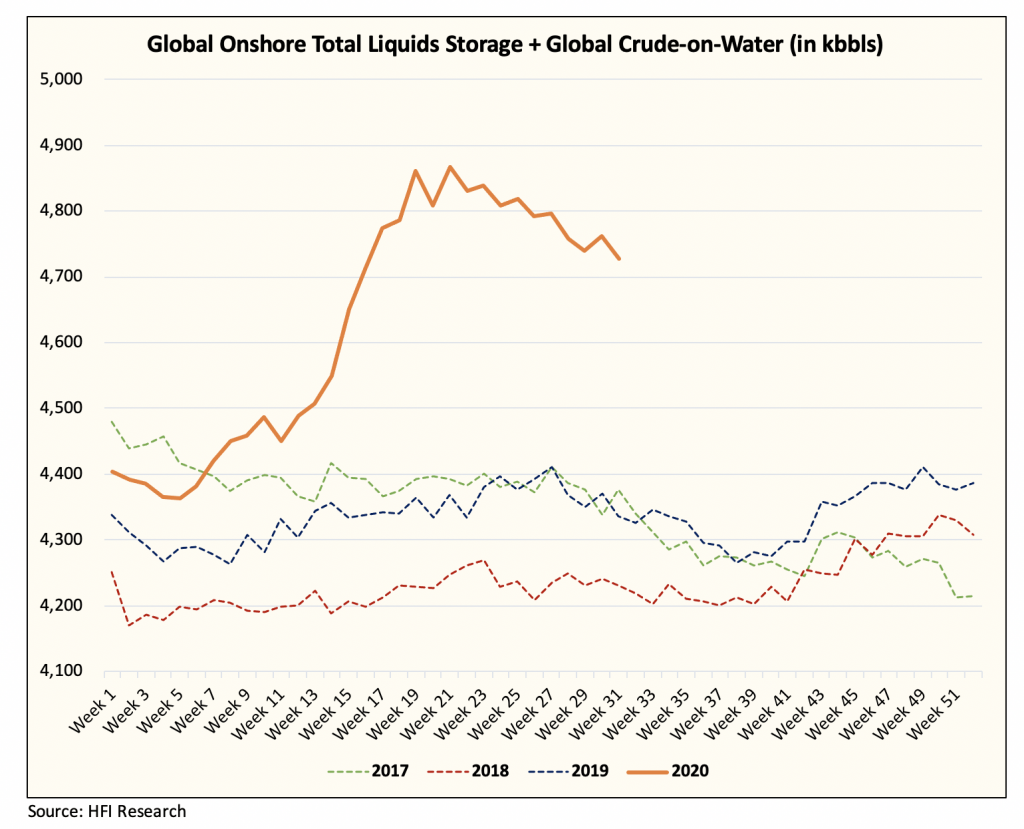 Enthused by the sudden crash in crude prices, oil bears are daring to imagine oil at $50 a barrel. Their optimism is boosted by tanking stock markets, soaring inflation and mounting recession fears.

Ever since the Russian invasion of Ukraine in February, oil prices have maintained a steady climb, hitting $127 per barrel on 8 March 2022. But new concerns about the global economy going into a major recession have seen the price crash to just above $100 amidst a commodity sell-off and there are signs of oil coming under further downward pressure.

At times of recession, it has been seen that there is no floor price as far as oil is concerned.  For instance, in 2008 Brent plunged from $148 in July to $35 six months later. At the other end of the spectrum, crude fell from $115 to $27between 2014 and 2016, though there was no recession as such. This was mostly due to rising supplies, accompanied by relatively weaker demand.  This was the lowest level in oil price since November 2003.

The downtrend in price even threatened the future of OPEC as a defender of the oil cartel’s interests as members questioned the very rationale for the existence of the organisation. A low price regime cannot sustain any kind of discipline among members as nations with predominantly oil-dominated economies, particularly the Gulf Arab countries, have been found to go to any extent to protect their market shares rather than the common goals of the organisation.

But prices began to increase gradually from early 2016 to late 2018, regaining levels of $75 and above per barrel for much of mid-2018. This was on the back of strong demand, which was, however, tempered by significant increases in supply, particularly due to the efforts of the US. The upward momentum was maintained by concerns over the impact of sanctions against Iran.

The Covid pandemic turned another phase when the outbreak itself and the lockdowns led to a dramatic cut in demand, oversupply of oil and rapid build-up of stocks. Prices even fell to below $20 per barrel in April 2020, the lowest since February 2002 before recovering subsequently during the rest of 2020 and much of 2021.

Underlying increase in demand, combined with below target supply from OPEC and increased tension over the Ukraine crises helped to push prices higher, reaching $90 per barrel in late January 2022 and $97 on 22 February; their highest since September 2014. With sanctions against Russia beginning to bite, supply constraints have further tightened the market, culminating in the upper 120s in March, before prices crashed to the present levels all of a sudden due to recessionary fears.

It is obvious that oil prices are solely dependent on free market forces. The shape of the global oil market is determined by oil monopolies, cartels and oil producing nations colluding to jack up prices artificially. Also, it has been consistently proven that successive new peaks in prices cannot be any guarantee against touching bottoms.

A protracted period of feeble growth and elevated inflation, raising the risk of stagflation, with potentially harmful consequences for middle- and low-income economies alike, means that the current phase is headed more south than north.

According to the World Bank’s latest Global Economic Prospects report, growth is expected to slump from 5.7 percent in 2021 to 2.9 percent in 2022— significantly lower than 4.1 percent that was anticipated in January. It is expected to hover around that pace over 2023-24, as the war in Ukraine continues to disrupt activity, investment, and trade in the near term, while pent-up demand fades, and fiscal and monetary policy accommodation is withdrawn. As a result of the damage from the pandemic and the war, the level of per capita income in developing economies this year will be nearly 5 percent below its pre-pandemic trend, the report feels.

According to analysts with the Bank of America, the situation is so complex that oil prices could surge higher or plunge lower depending on what happens next in global markets. While they don’t see the current trends taking the price below $100 levels, they are not prepared to rule out the possibility of a 30 percent drop when recession really starts to bite. They seem to be comfortable at a price forecast of $75 while some of the more bearish elements bet on a still lower level. The bears feel that If the Biden administration goes to the extent of easing the restrictions on fracking, prices could even fall below $50. (IPA Service)