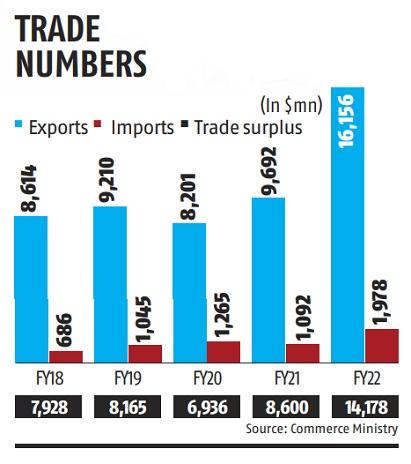 Thanks to improved regional connectivity and growing bilateral interest, the volume of trade between India’s Northeastern states and Bangladesh has gone up significantly in recent years. Present trends are positive enough to generate optimism among analysts about medium term prospects of North East India-Bangladesh bilateral trade: they feel that the foundation of a new trade/business hub dominated by imports and exports, has finally been laid.

The present phase of growth is the outcome of consistent efforts made by both Indian and Bangladeshi authorities during the past decade to explore new ways for expanding bilateral trade. The exercise fitted in well with India’s own regional LookEast initiative, seeking to extend its diplomatic/economic outreach.

While welcoming the growth in Indo-Bangla bilateral trade, Chambers of Commerce sources are hopeful that growing economic ties between the two countries could well ensure the success of the LookEast programme: by way of comparison. It can be seen Indo-Myanmar bilateral business, largely because of the volatility of Myanmar’s domestic politics, has not progressed smoothly in recent years.

Broadly speaking, Bangladesh imports more finished products and value-added items from India, whereas the bigger country imports comparatively goods less processed and raw materials. This naturally results in a negative balance of trade for the smaller country. Both countries have over the years tried to reduce the gap to the extent possible, through periodic negotiations and re-arrangements of existing terms of trade.

By reducing levies / withdrawing tariff on some Bangladeshi goods, India has tried to accommodate Bangladesh as far as possible .Occasionally this has evoked protests within India from sections of entrepreneurs, especially in the textile sector, who complained of losing their domestic markets.

On the other hand, Bangladesh, faced with growing trade imbalance, feels India could be more helpful.  However, with industry and manufacture picking up in Bangladesh in recent years, its exports have grown gradually more sophisticated.

Recent Assam-based media reports indicate that the Northeastern states imported from Bangladesh taka 367 crore worth if items during 2019-20, a sharp increase from the year before, when the figure was tk 40 crore! (One Bangladeshi taka equals about 85/90 paise of the Indian rupee). The NE states exported tk 472 crore worth of goods in 2018-19 and good worth tk 390 crore during 2019-20.

During bilateral negotiations, it was generally agreed that there was a rising demand in both countries to step up trade and business. The seven NE states sold to Bangladesh large quantities of coal, engineering items and products, auto equipment, besides coal, stones, eggs and onions, etc. There was a special demand in Bangladesh for tea produced in Assam, along with cotton and products, petroleum goods as well as glass items and ores from Meghalaya. Fruits and corn grown in Arunachal Pradesh and handicrafts from Manipur too, were popular in Bangladesh.

Similarly, in the NE region, there was good demand for cement, plastic items and packaged foods from Bangladesh, as well as for different varieties of fish– especially the Hilsa!

With India granting Bangladesh transit rights to access Nepal and Bhutan through its territory, experts are hopeful that the volume of regional trade as a whole would expand gradually. As both India and Bangladesh have agreed to use rivers, roads and railways linking both countries mutually, travel and easier movement of goods, involving the saving of both travel time and costs, have become possible.

Moving through Bangladesh territory, the distance from Agartala to Kolkata has been reduced from about 1600 kilometres through the long Assam detour, to about 600 kms only — and time taken has been cut from about 48 hours earlier to about 32 hours at present.

Bangladeshi Prime Minister Mrs Sheikh Hasina during her meetings with Indian Prime Minister Mr Narendra Modi, had suggested that NE-based industrialists/entrepreneurs could use the Chittagong and Mongla ports for their export trade, which were geographically much nearer than the Kolkata port. The use of Mongla port could ease the congestion and delays often experienced at Chittagong. Mongla port could earn more revenues, while Indian users could profit by saving travel time and costs, not to mention the occasional congestion at Kolkata port.

India has started dispatching engineering goods and foodgrains to Agartala from Kolkata port, using the river routes within Bangladesh. In Bangladesh, efforts are on among entrepreneurs to ascertain the possibilities of expanding trade with Nepal and Bhutan. Travel operators and agencies are confident of a rapid expansion in tourism and related activities.

Bangladesh is also keen to import power from both Nepal and Bhutan, to meet its growing domestic demand. At present, the country receives fuel supplies through a pipeline from Bongaigaon refinery complex running through North Bengal. (IPA Service)

Shraddha Murder Case: So Many Loose Ends To Be Tied Up By Police
Posting....