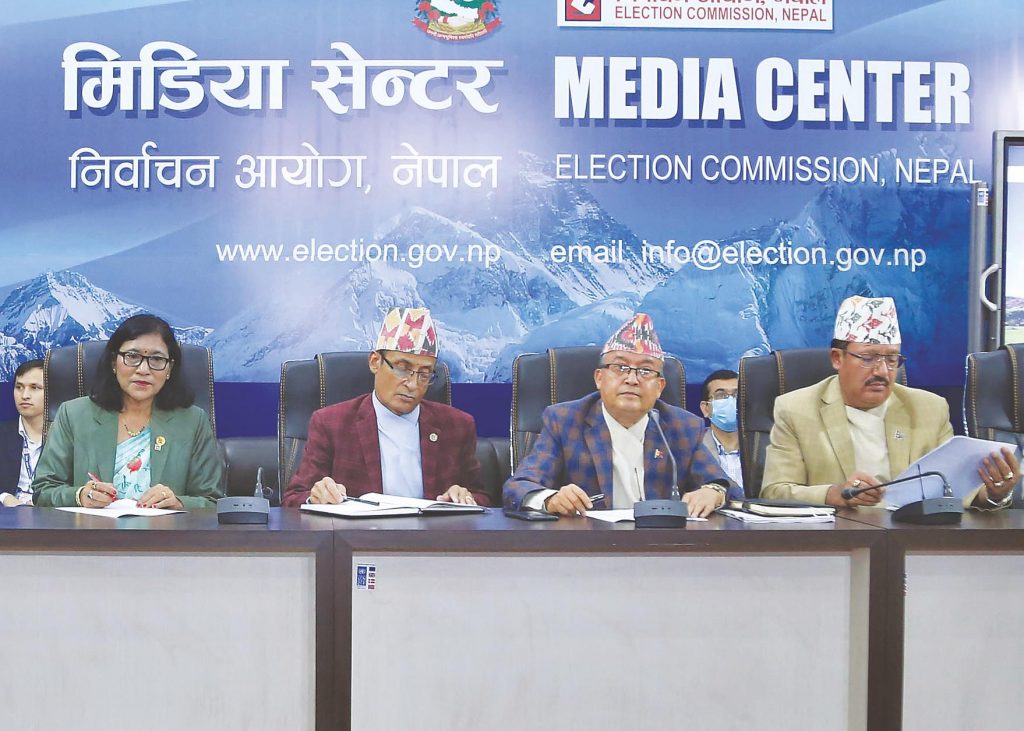 The Federal Parliament and provincial assemblies’ elections in Nepal are scheduled to take place on November 20. But the election fever isn’t felt in most of the 165 first-past-the-post constituencies or directly electable seats out of 275 lower house seats of FP. The same is true for 330 FTPT seats to be directly elected to provincial legislatures out of 550 provincial law-makers. The rest (110 in the FP and 220 in PL to be elected under proportional representation) are to be filled in after the election of FTPT seats. The National assembly – the upper house – has 59 members; 56 are indirectly elected to six-year terms by an electoral college comprising  provincial and local leaders, while three nominated by the President of Nepal on the government’s recommendation.

In 2017, over 74 percent of eligible voters exercised their franchise in the two-phase polling. But five years later in May-June 2022, the voter turnout dwindled significantly to around 64 percent when Himalayan country voted for the second local level election. Many political analysts apprehend a lower turnout in the single phase polling on November 20. The sense of panic was reflected in the speech of Pushpa Kamal Dahal, chairman of Communist Party of Nepal (Maoist Center)  at a mass meeting in Bharatpur in   when he came to campaign for her daughter Renu Dahal who was elected Mayor of Bharatpur Municipality as the candidate of five-party alliance. He warned that the country would fall into a crisis if the people didn’t vote for Renu. Once a firebrand and hardcore Maoist, the CPN(MC) is ridiculed as a ‘parliamentary cretin’ by the left-leaning intelligentsia that were enamoured of ‘Prachanda’ (as he was nicknamed) when the erstwhile CPN(Maoist) in their underground days  was on the way of capturing the then Royal Kingdom of Nepal.

During the two-phased local body elections five years back for 481 Village Councils, 246 Municipalities and 17 Metropolitan Cities, 14 million citizens were entitled to vote, but more than one-third did not turn up at the polling booths although they were deprived of exercising their rights to elect representatives to local-self governments for two decades. In the ensuing national and provincial elections, 18 million citizens are listed in the electoral roll. There  is a low probability of 70 percent-plus polling unless there is last-minute  interest  among electors to exercise their democratic rights.

Abhi Subedi, poet, playwright and commentator in an article in early 2022 on ‘ethos of disillusionment’, seen among the people, stated that following the global pattern, “Corrupt political machineries and the praxis of lies are responsible for the general culture of disillusionment and lack of enthusiasm for action among the people in Nepal too. The overt political interest in everything at the cost of economic growth stabilisation of human, artistic and academic developments has created a culture of mistrust and doubts in Nepal”.

Top brass of CPN(MC) and splinters of CPN ( United Marxist Leninist) are not immune from corrupt tendencies. “Whom people once revered as angels among the Maoists and some other communist parties exposed themselves as greedy soon after coming to power,’ said a former federal parliament member .

Three major parties – Nepali Congress, the Communist Unified Marxist-Leninist (UML) party and the Maoist Centre – have all led different coalitions in the past but none have served the full five-year term as power struggles and infighting keep their political activities dominating. Maoist rebels, who battled the government for a decade before agreeing to a ceasefire in 2006 are now in mainstream politics. Significantly, present finance minister Janardan Sharma, once a Maoist guerrilla commander, admitted that Nepal’s recent economic woes and political stability would be a priority for the voters in the election. Inflation rate right now veers around 8 per cent. The economy is expected to expand 5.1 per cent year-on-year in the current fiscal year starting mid-July, down from 5.84 percent last year, according to the World Bank estimates.

Given this grim reality, even incorrigible optimists among the Nepali intelligentsia do not see the possibility of pro-Left combine to win and form the federal government. The main contestants are in all likelihood the NC and CPN(UML).Among the major political  leaders  Prime Minister and President of Nepali Congress Sher Bahadur Deuba is contesting  from Dadeldhura  while the NC general secretary Bishwa Prakash Sharma contests from Jhapa-1, CPN-UML Chairperson KP Sharma Oli  is a candidate from Jhapa-5 while filed his candidacy from Gorkha-2 and .chairman of CPN (Unified Socialist) Madhav Kumar Nepal filed his nomination from his home district Rautahat constituency 1. National Independent Party President Rabi Lamichhane is set to fight the election from Chitwan-2. Rastriya Prajatantra Party chairman Rajendra Lingden  is a candidate from Jhapa Constituency No 3.  Rabindra Mishra, senior vice chairman of RPP contests from Kathmandu Constituency No 1.

Unprecedentedly, some top leaders who were considered as crowd-pullers for oratory confine themselves to campaign in their constituencies than campaigning for party candidates. They seem in nervous tension about winning confidently. Among them are very senior leaders of parties like CPN(MC) and the CPN (Unified Socialist) and some of NC  leaders  including  a former general secretary/. UML vice chairmen Subash Chandra Nembang and Bishnu Poudel have also not been campaigning nationally. Deputy general secretary Pradeep Gyawali and secretaries Gokarna Bista and Yogesh Bhattarai too do not leave their areas.

Free from the oppressive royal regime, the people of Nepal got a vibrant parliamentary democracy but  personal ambitions of top leaders of so-called communist parties ‘have created frustrations and ruined high expectations. All the communist factions have lost the trust of the Nepalese electorate. The elections are giving no prospects of stable government which can work for the welfare of the people. (IPA Service)