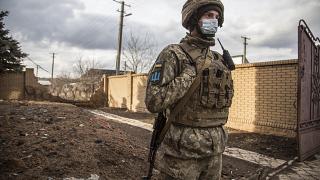 Despite the slanted propaganda that passes for “news” in the mainstream Western media right now, the truth of the matter is that there are no good guys when it comes to the conflict in Ukraine. But depending on the day, some of the bad guys outdo the rest.

In Moscow, President Vladimir Putin has said for months that he wanted only to stop NATO expansion into Ukraine and deter attacks against ethnic Russians in the Donbass, dismissing claims that Russia was planning an attack on its neighbor. The precision air strikes and border incursions now underway as part of his “special military operation” put the lie to that. Clearly, the Russian leader was preparing for what the old expert George W. Bush might have called “preemptive self-defense.”

Putin sits at the head of a parasitical capitalist and gangster class that rules over the stolen wealth and resources that generations of Soviet workers and farmers built up during 70 years of socialism. He trashes the idea that peoples and nations have the right to determine their own future, questions the legitimacy of Ukraine’s existence, and longs for the days of the old Russian Empire. As a political figure, this modern-day would-be czar certainly deserves no sympathy from progressives and leftists in the West.

But to simply portray Putin as the latest incarnation of Hitler, a territory-hungry madman, as House Speaker Nancy Pelosi does, is to intentionally ignore the legitimate security complaints that Russia has been making for years. (It’s also a case of finding Nazis on the wrong side of the Russia-Ukraine border, but more on that in a moment.)

The current crisis is underpinned by issues stretching back over 30 years—from the end of the Cold War to the present. Way back in 1991, President Bush the First made a pledge to Soviet leader Mikhail Gorbachev that when the USSR withdrew from Eastern Europe, NATO would not seek to add countries there to its ranks.

If the West had truly been interested in creating the conditions for lasting peace for Europe, it would have dissolved NATO completely in that moment. Instead, barely a minute was wasted in proving Bush’s promise was empty; the alliance not only expanded into former Warsaw Pact countries like Poland, the Czech Republic, Slovakia, and Romania, but actually gobbled up nations that were formerly part of the USSR itself, like Latvia and Lithuania.

With the excuse of being a “defensive” alliance against the Soviet Union gone, NATO was openly refashioned into a direct instrument of U.S. military policy. NATO helped tear the country of Yugoslavia to pieces, bombarded Afghanistan after Sept. 11th, and pushed Libya into a civil war.

Given this history, Russia’s fear of NATO pulling Ukraine into its sphere and creeping directly up to the Russian border is far from absurd. It is little wonder that Putin has been demanding the U.S. and NATO remove all weapons from Ukraine, that a guarantee be issued Ukraine will not join the alliance, and that all former Soviet nuclear weapons on Ukrainian territory be secured. Any Russian leader—left, right, or center—would ask the same.

On this side of the Atlantic, President Joe Biden has endlessly talked for months of “defending Ukrainian democracy” and of peaceful intentions, all the while deploying increasing numbers of U.S. missiles and troops closer to the Russian border—to not only Ukraine, but Poland, the Czech Republic, and other countries. Fully aware of Russia’s security worries, Biden and NATO pushed the envelope anyway, acting as intentional provocateurs. A peacemaker the U.S. president is not.

Although too few have paid attention, Biden has also pulled back the curtain on the U.S. economic interests pushing for a Russia-Ukraine war—the ones who stand to profit here at home from fighting in eastern Europe. There are the usual suspects, of course, the missile makers and plane producers, but the other big winners in this war are the big oil and gas companies.

Repeatedly at points throughout the current crisis, Biden has threatened Germany and Russia’s Nord Stream 2 natural gas pipeline and pushed Berlin to squash the project. All the pipeline talk didn’t come out of nowhere.

Companies like Chevron, ExxonMobil, and Shell, along with the hundreds of drilling and shipping contractors that work with them, want to massively step up exports to a Europe starving for gas, but standing in the way has been Russia and its state-owned Gazprom company. Currently, Russian natural gas accounts for over 30% of all imports into the European Union. Leading EU powers Germany and France get 40% of their gas from Russia, while some other countries, like the Czech Republic and Romania, use only Russian gas.

In order to dislodge the competition and grab market share, the Western multinationals need to slow the flow of gas from the east. Completed late last year and due to become operational in 2022, Nord Stream 2 would permanently cap U.S. sales, which arrive via expensive shipping terminals.

The government of Ukraine, which benefits from transit fees for existing overland pipelines, lobbied Washington all summer last year to impose sanctions on Nord Stream 2 and the German and Russian companies behind it. With Putin’s invasion, Ukraine’s rulers and the Western gas companies got what they asked for. Nord Stream 2 is postponed, indefinitely; Germany has revived plans for more terminals to ship in U.S. gas; and world energy prices have soared as a result of the war.

Now, as for the talk of Nazis—well, the real fascists in this situation are the ones who rule the roost in Kiev and have command over the Ukrainian Armed Forces. Though he’s playing a starring role at the moment, President VolodymyrZelensky—a Russian-speaking comedian turned nationalist politician—is just the latest in a string of rotating faces at the top of the right-wing Ukrainian state.

The current government came to power in the wake of the 2014 “Euromaidan” protests that overthrew the corrupt albeit democratically-elected administration of President Viktor Yanukovych. Trying to play Russia and the EU off one another to get the best economic deal for Ukraine when he was in charge, Yanukovych became the target of Western-backed business interests in Ukraine and ultra-nationalist neo-Nazi groups. The latter joined together, with U.S. support, to carry out a coup and send Yanukovych running for Moscow.

In the wake of that coup, labor unions and left-wing parties were severely repressed in Ukraine. In Odessa, dozens of union members were burned alive in one case of mass murder, while activists of the Ukrainian Communist Party and other groups have been forced underground.

From the beginning of the current crisis, the Zelensky government has waffled. At one moment, it presses for confrontation because it thinks it might be able to extract more military and economic aid from NATO while protecting its own pipeline profits as the handler of Russian gas. Then, at another moment, it cautions against war panic when it starts to look like the situation might actually engulf them in a real war.

Zelensky openly announced his desire last week to execute a war “with foreign military support” against Russia and the breakaway regions its east. Then, when Russian missiles start to rain down and troops cross the border, he suddenly casts his country as a poor victim in a “war of aggression.” Having perhaps convinced himself Russia would never actually ever respond with a full-scale military assault, Zelensky may now be waking up to the realization he made a bad gamble.

Does all of the foregoing justify the “special military operation” now being carried out in Ukraine by Putin’s forces though? His claim that Ukraine needs to be “demilitarized” and “de-Nazified” is certainly a laudable goal, given the clique that holds power in Kiev and the developments in that country since 2014. But the actions taken by the Russian military—which so far involve strikes on Ukrainian military infrastructure, air defense sites, airfields and military aircraft—constitute a major escalation of the conflict and must be condemned. Putin said he wanted no invasion but launched one anyway.

But there’s more than enough blame to go around. The U.S., NATO, and Ukraine said they wanted peace but provoked a war anyway. The U.S.-led imperialist encirclement of Russia after the Cold War and the brutal actions of the fascist-backed government in Kiev conspired together to bring us to this moment.

To avert further catastrophe and upset the plans of the war profiteers, all the governments and forces involved must be pressured to pull back and return to the negotiating table. (IPA Service)