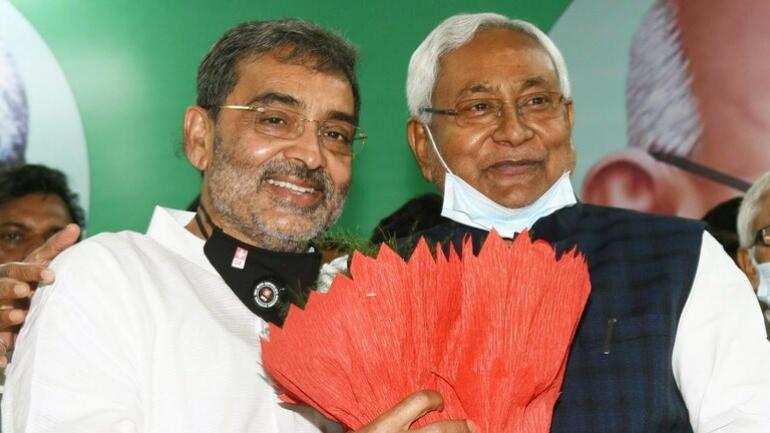 The storm of disagreement between NDA allies BJP and JDU shows no signs abating, with both parties bitterly disputing over Nitish Kumar’s future vis-à-vis staying on as the Bihar Chief Minister beyond 2025. In this context, the chairman of the parliamentary board of Janata Dal (United), Upendra Kushwaha, has indicated his strong displeasure over what he considers an unnecessary nuisance orchestrated by ally BJP’s leaders over the chief minister’s post in Bihar. “If BJP thinks that it will replace Chief Minister Nitish Kumar and make its own chief minister in Bihar before assembly elections in 2025, then it’s not going to happen”, said Kushwaha. Kushwaha also said that as long as the BJP and JDU remain in the united alliance in Bihar, Nitish Kumar would remain in the CM’s chair. In fact, CM Nitish Kumar refuted media speculations about him quitting his post for his election to Rajya Sabha. Addressing the gossip mills in the media, the Bihar CM cleared the air in no uncertain terms: “They publish anything, I too get surprised upon reading it.” Interestingly, Kumar had on March 30 said that his wish to go to Rajya Sabha was not fulfilled yet. The Bihar CM made the statement when asked what his stand would be, if the BJP wanted to send him to the Upper House of the Parliament. Six Rajya Sabha seats from Bihar are falling vacant in July this year, two of which are with the JDU. Out of the remaining four, two are with the BJP and one with the Rashtriya Janata Dal (RJD). One seat belongs to RJD’s Sharad Yadav, who has been disqualified under the Anti-Defection Act but his case is pending in court.

NCP chief Sharad Pawar on Wednesday interacted with Prime Minister Narendra Modi at the Prime Minister’s Office (PMO) in Parliament. The twenty-minute meeting between the two leaders led to speculation about new equations emerging in Maharashtra politics. However, Pawar categorically ruled out a tie-up between the NCP and BJP and expressed disagreement over the alleged misuse of the central probe agencies. The NCP chief’s meeting with the PM assumed a heated political significance as it took place barely a day after the ED attached assets worth more than Rs 11.15 crore linked to Rajya Sabha member Sanjay Raut. After the meeting, the NCP chief told reporters that he spoke with the Prime Minister about the 12 members’ nomination to the legislative council. “The government of Maharashtra had written regarding this nomination to the governor. But Mr Koshyari has not acted on it. Therefore, 12 seats of legislative councils have been lying vacant for the last two and half years. I just brought this thing to the notice of the Prime Minister,” he said. Pawar also indicated that he was not inclined to take up the responsibility of UPA chairpersonship and there was no imminent threat to Maha Vikas Aghadi (MVA), the ruling alliance of Shiv Sena, NCP, and Congress, in Maharashtra.

VASUNDHARA RAJE BACK IN RAJASTHAN SPOTLIGHT, TAKES POTSHOTS AT GEHLOT

With the Rajasthan assembly elections approaching early next year, former Rajasthan chief minister Vasundhra Raje seems to be getting more intensely involved in the state politics, especially following her meeting with Prime Minister Narendra Modi. Her meeting with PM Modi and senior central leaders has birthed speculations over BJP’s strategy and election campaign for the desert state, creating a state of buzz within the divided factions while putting her back in the spotlight. Currently, the national vice president, Raje, who was not a part of the election campaign in the five states that recently polled, was also seen during the swearing-in ceremonies of Pushkar Singh Dhami and Yogi Adityanath. Raje, recently, took a swipe at the Congress government in Rajasthan over an order ensuring supply of electricity to Muslim-dominated parts during Ramzan. The senior BJP leader said Hindus were fasting for Navratri too during this time and criticized the Ashok Gehlot administration, tweeting: “People in the state are not only observing Ramzan… they are also observing fast for Navratri in this hot summer. The state government should answer why it is only concerned about those observing Ramzan, and why not about the rest of the people of the state? If this is not appeasement and vote politics, then what is (it)?” On April 1, an order issued by the Jodhpur discom’s assisting managing director, RS Badiasar, directed the engineers of 10 districts under its jurisdiction to ensure uninterrupted power supply in all ‘Muslim-dominated areas’ during Ramzan. Faced with the growing criticism, the authorities came up with a fresh order on Tuesday, striking down words like ‘Ramzan’ and ‘Muslim-dominated areas’.

After the massive victory of the Aam Aadmi Party (AAP) in the recently held Punjab assembly elections, the Delhi chief minister and AAP national convener, Arvind Kejriwal, along with his Punjab counterpart, Bhagwant Mann, held a roadshow in Himachal Pradesh’s Mandi, months before the assembly elections in the state. Kejriwal, whose party is strategically looking forward for a political footprint expansion, claimed that the AAP would uproot corruption from Himachal Pradesh if it came to power. Kejriwal said: “We are common people, we don’t know how to do politics. Instead, we know how to work for people, build schools and end corruption. We have ended corruption in just 20 days in Punjab since Bhagwant Mann became the chief minister. Now, ‘kranti’ should happen in Himachal Pradesh too”. To begin its poll campaign, the AAP has chosen Mandi, the home turf of incumbent chief minister Jai Ram Thakur. This is the party’s first major event in the run-up to the Himachal assembly polls and would also reflect the mood of the public in the hill state. Himachal is set to go to the polls at the end of this year and another BJP-ruled state Gujarat. The AAP has also announced to contest the Shimla municipal election, the schedule for which is expected very soon. Last month, the AAP had appointed an eight-member team to expand the organisation and devise poll strategies in Himachal. Delhi health minister Satyendar Jain has been made the election in-charge and has already visited the state several times since the AAP victory. Durgesh Pathak has been appointed the state in-charge.

After the bleak show put up by the Congress in the recent five state assembly elections, the party is all set to hold two padyatras across the country to commemorate India’s 75 years of Independence, with the aim of highlighting the party’s contributions to the country’s freedom struggle and spread the message of communal harmony. The Congress on Wednesday, 6 April, launched its first yatra, the “Azadi Gaurav Yatra”, from Sabarmati Ashram in Gujarat, which will culminate in Delhi on June 1, after covering 1,200 km through Gujarat, Rajasthan, Haryana and Delhi. Managed by the Congress Sewa Dal, the beginning of the Azadi Gaurav Yatra coincides with the end of Mahatma Gandhi’s Dandi March on April 6, 1930 against the British Empire. The second yatra, named the “Gandhi Sandesh Yatra”, will start on 17 April from Champaran in Bihar and will end in Beliaghata in West Bengal on May 27, after covering 800 km through Bihar, coursing through Jharkhand and West Bengal. The Gandhi Sandesh Yatra’s beginning coincides with Mahatma Gandhi’s Kisan Satyagraha of April 1917, launched from Champaran. It ends on May 27, Jawaharlal Nehru’s death anniversary, and will be managed by the Indian Youth Congress. (IPA Service)

Hike In Fuel Prices Have Led To Steep Rise In Costs Of Essential Items
Posting....