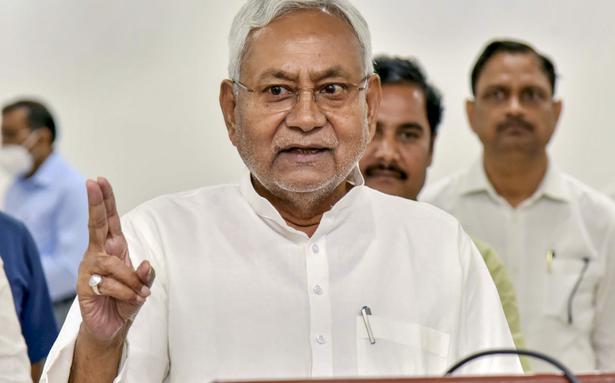 Strong differences of opinion continue to widen the gulf between Bihar Chief Minister Nitish Kumar and his ally BJP. After CM Nitish’s initiative on caste census compelled alliance partner BJP to also come to the fore on the issue, the canny CM has now said that there was no need for any anti-conversion law in Bihar. Nitish Kumar has asserted that Bihar is a place where the members of different religious communities, irrespective of any barrier, live in peace and harmony, which precludes the necessity for such a law. This move comes despite the leaders of the BJP, the ruling alliance partner with the JD(U) in Bihar, have been demanding such a law for a while. Senior state BJP leaders had earlier urged the Bihar government that Rohingyas and Bangladeshis have illegally sneaked into Bihar and they should not be counted in the caste-based census to legitimise their stay. However, Nitesh Kumar, who controls the JD(U) and credits his influence and rise in politics to the secular socialist movement, is questioning the narrow perspective and could also be seen as sending a strong message to his ally, BJP.

Congress has decided to make its communications department more powerful. The party has resolved to be more assertive in taking control of social media, research and data analysis units, in order the set the political narrative more forcefully. According to sources, even the state units would be overhauled and similar modes for cross-sector communication would be set up under the supervision of the general secretary for communications. Unit heads would be appointed in consultation with the AICC general secretary for communications. At the Udaipur Chintan Shivir, it was announced that 50 percent of individuals in every committee would be those who are younger than 50 years and that no person would hold a post for more than five years. A new AICC communication department head could be appointed soon, and the names making the rounds are those of Jairam Ramesh, Abhishek Manu Singhvi and Pawan Khera.

Congress candidate Uma Thomas won the Thrikkakara by-election by a historic margin. She defeated Left Democratic Front (LDF) candidate Joe Joseph by a majority of 25,515 votes. This is the biggest majority win in the history of the Thrikkakara Assembly constituency. Uma Thomas committed her win to PT Thomas, her late husband and former MLA. The by-election was held following the death of PT Thomas. The outcome of this result is undoubtedly a personal setback for chief minister Pinarayi Vijayan who often said it would be a vote for development and a referendum on the performance of his government.

VARUN GANDHI TWEETS ON UNEMPLOYMENT: IS BREAK WITH BJP IMMINENT?

Taking up the issue of increasing unemployment in the country, and existing vacancies not being filled, BJP Lok Sabha MP from Pilibhit, Varun Gandhi, shared a video of a CTET-qualified youth driving an e-rickshaw on Twitter, saying: “No work is small or big. But it is sad when a skilled and educated person doesn’t get employment according to his/her abilities. When more than 60 lakh sanctioned posts are lying vacant in the country, this CTET-passed young man is forced to ferry passengers in an e-rickshaw. This is a collective failure of our Parliament.” Praising Varun Gandhi for tweeting about the unemployment scenario in the country, a youth, Aman Khan, who was provided with a confirmed ticket and accommodation for the RRB-NTPC exam after Gandhi’s intervention, replied to the MP’s tweet, saying: “My family and I will always be grateful for what you did for us. The country is in dire need of leaders like you who can guide and lead youngsters like us.” Varun Gandhi appears to have closed all options of rapprochement with the BJP and has taken on the mantle of a rebel. Varun has been criticizing the policies of the central government for a few years now. The buzz is that Varun is likely to contest as an independent or embrace Samajwadi Party or even the Congress for the 2024 Lok Sabha elections.

The Naveen Patnaik-led BJD once again displayed its unrivalled supremacy in Odisha politics, with its candidate Alaka Mohanty winning the Brajarajnagar assembly by-election decisively. Alaka won the by-poll with a margin of more than 65,000 votes from her nearest rival Kishore Chandra Patel of the Congress. BJP’s Radharani Panda finished third. The by-poll was conducted owing to the demise of the sitting BJD MLA and Alaka’s husband Kishore Kumar Mohanty in December last year. The result was also heartening for the Congress, as the grand-old party pushed the BJP to a distant third position. Sarat Pattanayak, who took over as OPCC chief recently on May 23, has reasons to be content. In past, many by-elections such as Bijepur, Balasore, Patkura and Pipili in recent years, the party had finished third, mostly losing deposits. But this time, it has ended up in a remarkable second position. While BJP candidate Radharani Panda had won the seat in the 2014 state elections and was the runner-up in the 2019 elections, but this time, she was pushed to the third place.  (IPA Service)

High Inflation Is Eroding The Real Wages Of The Working People In India
Posting....