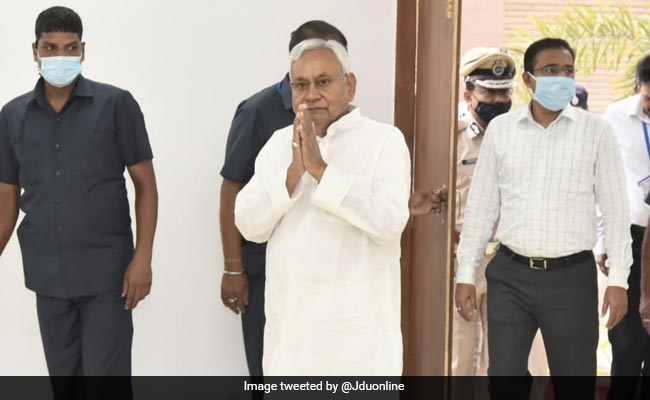 Narendra Modi is so smitten with the eulogy showered on him by his sycophants and bhakts of his being the strongest and most powerful politician India ever had in its 75 years of political freedom that he prefers to roam around in his make believe world taking inspiration from the political support and guideline of the RSS ignoring the basic ground realities.

It is an open secret that Modi nurses the perfidious traits of an autocrat and dislikes the person who does not carry out his diktats. But this time he has been rebuffed and shown the proper place by none else but by his friend and alliance partner, Nitish Kumar. Both have been strange bed fellows, no one relies the other but continue to maintain the façade of being a friend in public eyes.

Nonetheless this façade got shattered in the wake of selection of the candidates for the Rajya Sabha election. Modi in no-nonsense manner had asked Nitish to re-nominate his minister colleague RCP Singh, a senior JD(U) leader and  once a close confidant of Nitish. In the 2021,  R C P Singh surprisingly was inducted into the union cabinet by Modi. Nitish had not forwarded his name. It was simply a pure case of unforgivable transgression. With blessings of Modi, Sinha started creating his own independent space in state politics. It is worth mentioning that Sinha has been a factor responsible for straining of the relation of election strategist Prashant Kishor with Nitish.

Denial of ticket to Sinha has wider implication. As if this was not enough he nominated Jharkhand state JD(U) president and former MLA Khiru Mahto as the party’s candidate. This has sent a shock wave in the BJP. No BJP leader worth name had expected Nitish to go against the wishes of Modi. While it widened the chasm between Nitish and Modi, it also sent the message that Nitish was exploring the possibility of bringing the opposition parties closer   to him. Being described as master stroke, Nitish has proved his political supremacy to Modi. In 2021 Nitish had insisted four ministerial berths—two cabinet ministers and other two of the ministers of state – for his party, but finally accepted only one berth for the JD(U) in the Modi cabinet.

It was perceived by Nitish as a move to cut down his political stature by Modi. At that time he did not join issue with PM and simply waited for the right opportunity. The Rajya Sabha election has provided him with the right occasion to assert his identity. Nitish has grabbed this situation to present him as the leader capable to challenge Modi.

In a significant development Lalu Yadav has decided to throw his weight behind Nitish and has convened the all party meet on June 1, which will have Nitish as the key figure. Already the opposition parties made defeat BJP as the common cause at an event hosted by the Jayant Chaudhary-led Rashtriya Lok Dal at Delhi’s Vigyan Bhawan to commemorate the 35th death anniversary of former Prime Minister and farmer leader Charan Singh.

Meanwhile at the initiative of Nitish and Lalu Yadav the opposition parties across the country have decided to force the Modi government to launch nationwide caste census. RLD meeting also adopted a resolution saying “The last caste census in India was done in 1931 and all government policies are framed according to the numbers enumerated back then. Therefore, it is imperative for us to implement a caste census immediately to inform data-driven decision-making as is the case in almost all spheres of our life whether in medicine, sciences or business”,

The more the BJP and Modi government are opposing this move, the more the anti-BJP parties are forcing the Modi government. The BJP leadership is apprehensive that any such movement will give rise to Mandal and Kamandal politics and the BJP will lose its support base. With this the Hindu community will be vertically split. The Modi government had informed the  Supreme Court in 2021 that such an exercise would not be feasible, in Bihar, which is run by the saffron party along with the JD(U).

Significantly the RLD sponsored meeting was attended by senior leaders of JD(U), RJD of Lalu Yadav, Trinamool Congress, Aam Aadmi Party, CPI(M), Apna Dal (Kamerawadi) and the Tripura-based TIPRA Motha.  The convention also demanded for setting up of “Social Justice Commission” or an “Equal Opportunities Commission”. The panel will analyse the data that a caste census may throw up so that representation for women, SC, ST, backward, minorities or rural-based weaker sections is not the exception, but the norm.

RSS and BJP leadership is scared that if the caste census is launched in that  case the Sangh would lose the support base it has prepared during the eight years of Modi Raj. It will ultimately benefit the regional parties. On his part Nitish is firm on holding the all party meeting for implementation of caste based census. He said “We will call an all-party meeting to know their views on caste-based census and have spoken to some parties to conduct the meeting. The proposal of all-party meeting will go to the State cabinet meeting and then we will start work on conducting caste-based census”.

Modi government’s submission in the Supreme Court does not prohibit the State governments from carrying out the exercise. In Bihar the BJP cannot manoeuvre the issue, It will have to go along with Nitish’s decision. Any opposition to the move is fretted with the threat of getting isolated and branded as anti-backward party.

The exigency of the RJD to identify with the aspirations of the Dalits and extreme backward caste people could be underlined from its nominating a washerwoman from Biharshariff to contest the Legislative Council election. There are two primary reasons behind opposition pressing the demand for caste based survey. Of course the first is the design of the RSS and BJP to win over the SC and STon the plea of Hindus. The regional parties hold the view that Sangh was not at all sincere to the cause of this section and was exploiting them. The second is, it will also prevent the backward and dalit youths from being turned into mercenaries.

Though Modi and Shah claim to have a major section of the Dalits and OBCs as their party members, the fact remains that still continue to be depend on the support of the upper caste Brahmins, Rajputs, Bhumihars and Banias for their survival.  The leaders of regional parties strongly nurse the feeling that Modi and RSS were not paying them the recognition and honour they deserve. Even the state governments run by these parties are denied their share of resources. While caste census would underscore the exact numbers of the different castes it would also reveal the exact number of the disadvantaged segments living at the bottom of the ladder. This nature of revelation would rock the RSS and BJP boat and expose them in the eyes of the poor people.

Nitish and Tejashvi are aware of the fact that RSS and BJP refusing to go along with the caste census in Bihar would expose the anti-dalit and OBC character of the BJP and make people understand that it is a party of upper-caste people having vested interest. It is worth mentioning that the demand has gained more urgency after the BJP managed to win UP assembly election this year. The party has been desperately trying to win over the non-dominant Dalits and non-dominant OBCs. The election results also portrayed that the BJP is trying to diversify its social base. A caste census would simply jeopardise its electoral cause.

It is wrong to construe that caste census is peripheral to governance. All the government policies and programme are framed keeping in mind the electoral relevance of the castes notwithstanding the fact that the governments strive to promote the vested interest of the capitalists, rich and upper caste people.  There is no doubt the caste census would make the members of these castes more conscious of their  social and economic status,  the economic clout they preserve, their relevance into the electoral politics of the country and the political economy ideology they should pursue and practice.  This would expose the claims of the government what it has done to educationally empower the proletariats, Dalits and OBCs.  (IPA Service)