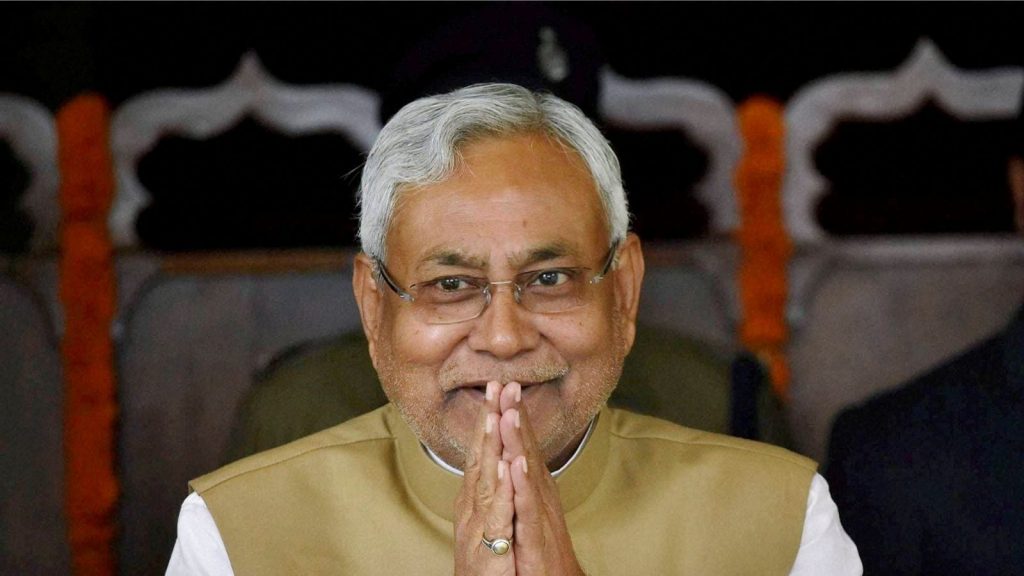 Bihar Chief Minister Nitish Kumar, who reached the national capital on Monday was conferring with  opposition leaders on taking on the BJP together.  Earlier, he  had a nearly one-hour-long meeting with Congress leader Rahul Gandhi.

This is the first meeting between Gandhi and Kumar since the latter walked out of the NDA in Bihar and formed a ‘Mahagathbandhan’ government with RJD, Congress and outside support of the Left. Kumar also met H D Kumaraswamy, former Karnataka chief minister and Janata Dal (Secular) leader.

Kumar visited the CPI-M headquarters and met general secretary Sitaram Yechuri to discuss how to bring the opposition parties together to take on Narendra Modi’s BJP. Both the leaders stress the need for parties to work together to defeat Modi.

On one hand, AAP has never openly welcomed the idea of opposition groupings and more so when Congress is in the fray. Recently when Ghulam Nabi Azad quit the Congress, the AAP lashed out at the grand old party and said it must cease to exist.

“Congress has served its purpose. There are a lot more alternatives who can challenge BJP. Congress has not been able to do it for the past eight years. We cannot, as a country keep giving chances to the Congress. Congress must go, Congress must cease to exist,” AAP MLA Saurabh Bharadwaj had said.

On the other hand, state parties such as the Dravida Munnetra Kazhagam, NCP and Shiv Sena have already signalled that an Opposition formation without Congress is not viable.

CPI-M leader Yechury had hit out at Kumar in 2017 when the JD(U) chief had parted ways with the grand alliance, accusing the Bihar chief minister of “political opportunism.” Yechury had, however, welcomed the “formation of a secular Mahagathbandhan government”in Bihar during his meeting with Deputy Chief Minister Tejashwi Yadav last month.

Kumar, however, has Telangana CM K C Chandrasekhar Rao on his side. The two of them met on August 31 and called for a BJP mukt Bharat, blaming the saffron party’s government at the Centre for the many ills plaguing the country.

Meanwhile, the Trinamool Congress (TMC) said it has decided to maintain a distance from the JD(U) since there has been no official communication to the party from the Mahagathbandan.

There were also reports of talks on possible Janata parivar reunion as well. “There is a discussion going on in the national level about the necessity of reunification of the splintered parties of the original Janata Party led by Jayaprapakash Narayan. This has gained traction after the JD(U)-RJD formed the government in Bihar. Today’s meeting with Nitish Kumar is a preliminary step towards it and we need to see how it goes,” said Kumaraswamy after the meeting.

Prior to reaching New Delhi, Nitish Kumar called on RJD supremo Lalu Prasad Yadav at the official residence of his wife and former Chief Minister Rabri Devi in Patna. She was also present in their meeting, along with Deputy Chief Minister Tejashwi Yadav.

Yadav on Monday said that uniting opposition leaders of the country is a big assignment and CM Kumar went to Delhi to execute it. “We believe that if all opposition parties come together in the country, it would be extremely difficult for the BJP to come into power at the Centre in 2024. Nitish Kumar and Lalan Singh went to Delhi to execute the plan and unite leaders of opposition parties,” he said.

The JD(U) on September 3 held a national executive meeting with all its leaders and office bearers. “Desh ka neta kaisa ho Nitish Kumar jaisa ho” was the slogan that rent the air, and summed up the sentiment, at the JD(U)’s Bihar headquarters ahead of the party’s meeting on Saturday.

Although Kumar modestly declined to answer questions about him being in the race for prime ministership, banners put up at the JD(U) office bore slogans that sent across the message loud and clear that the party expected its de facto leader to play a “national role”.

“Pradesh mein dikha, desh mein dikhega” (it has been seen in the state, now it will be seen across the country), “aagaz hua, badlaav hoga” (a beginning has been made, change will follow) were two of them.

However, Kumar suffered a jolt to his ambitions when five of the six JD(U) MLAs in Manipur jumped ship to BJP a day before the party’s executive meeting.

Gorbachev Couldn’t Reform The Soviet System But A Better Socialism Is Possible
Posting....