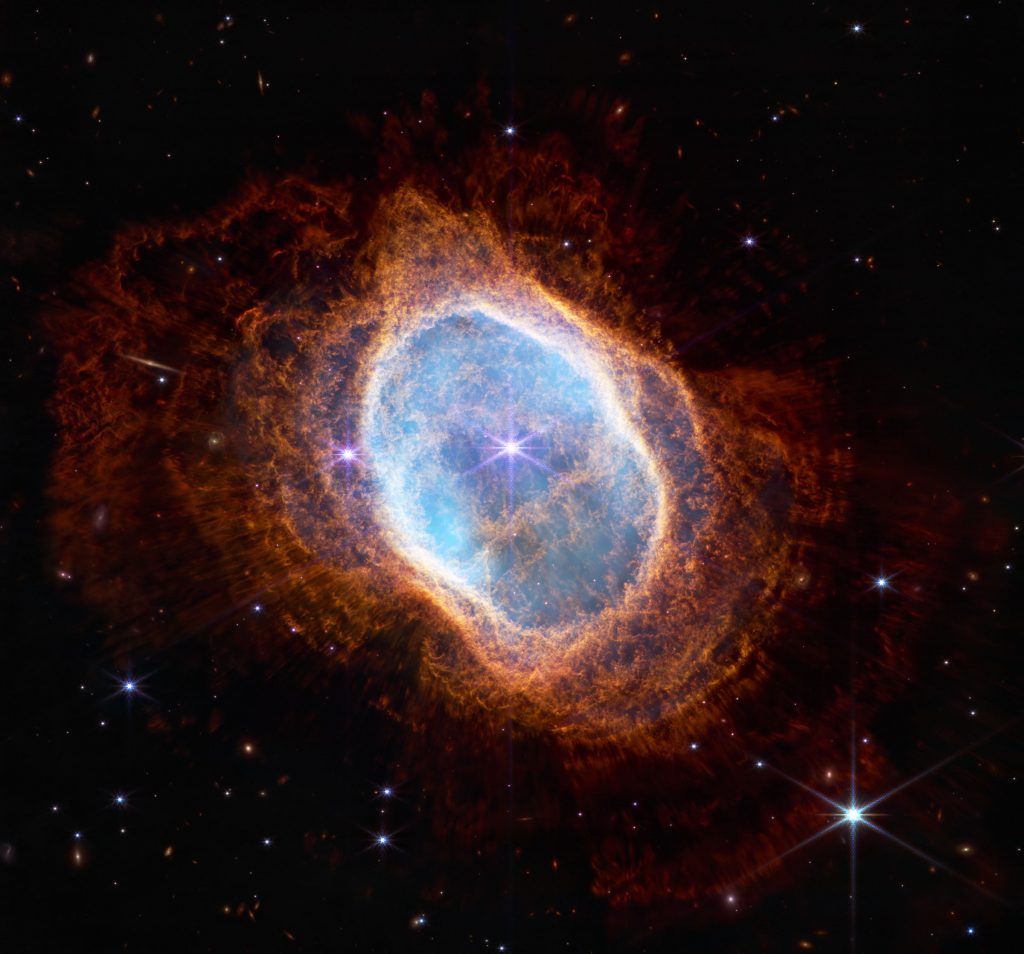 The new Webb telescope has shown that NASA’s $10 billion investment and 26 years are finally delivering their promise: pictures of the cosmos in depth, detail and quality far beyond what we had. The first images have captivated the public, and astrophysicists are drooling at the detail and spectra of distant objects, telling us what they actually are. For astrophysicists who started their careers even before the Hubble telescope, this is like witnessing two revolutions—Hubble and Webb—all in one generation.

The set of pictures is astounding in details and, therefore, in the promise they hold for the future. One picture is of galaxy cluster SMACS 0723, which has thousands of galaxies—including some of the faintest objects ever observed. NASA says, “Webb’s image is approximately the size of a grain of sand held at arm’s length, a tiny sliver of the vast universe. The combined mass of this galaxy cluster acts as a gravitational lens, magnifying more distant galaxies, including some seen when the universe was less than a billion years old.”

Since light takes a long time to reach us, not only are we looking at distant galaxies but also at the light that left these stars/galaxies 13.1 billion years ago. The Big Bang is estimated to have occurred 13.8 billion years back. So we are peering at objects a long distance away and a long time back. The Webb telescope is, therefore, like a time machine: it allows us to look back in time. If we go further, we may reach a period “shortly” after the Big Bang. How much farther back—another 300-400 million years? More? That is the question Webb’s researchers will answer in the future. All we know is we will learn far more about our cosmos with Webb and other such instruments.

The longer our distance from the object we observe, the more its light shifts towards the red side of the spectrum. This redshift is also known as the Hubble Effect. So the Webb telescope operates more in the infrared spectrum than the Hubble telescope, which operates more in the visible spectrum. And yes, visible light is a small part of the total electromagnetic spectrum; that is why we need instruments from radio telescopes to the Webb telescope, each with its version of the story of the cosmos.

The Webb telescope also has spectrometric instruments that tell us the composition of the elements that constitute the star. We can see the spectrum of hydrogen, oxygen and other components. That brings us to the next image of an exoplanet circling a nearby star, only 1,000 light-years away. An exoplanet is a planet orbiting another star, not our sun. The question is, how many such planets have water and, therefore, the possibility of life?

This exoplanet, WASP-96 b, is a gas giant and one of more than 5,000 confirmed exoplanets in the Milky Way. With a temperature higher than 600 C, it is significantly hotter than what can sustain life. It orbits extremely close to its Sun-like star, which it circles once every 3½ days. As the planet passes in front of its star, the light from it passes through the planet’s atmosphere. By examining this light, we can see the “absorption spectra”, or what the planet’s atmosphere has absorbed and, therefore, the composition of the planet’s atmosphere. While this planet cannot support life, in the future, Webb can help us analyse the many exoplanets in our galaxy and the potential of extraterrestrial life.

There are other images Webb has delivered. One is a set of five galaxies close to each other in what NASA calls a cosmic dance, “Sparkling clusters of millions of young stars and starburst regions of fresh star birth grace the image. Sweeping tails of gas, dust and stars are being pulled from several of the galaxies due to their gravitational interactions. Most dramatically, Webb captures huge shock waves as one of the galaxies, NGC 7318B, smashes through the cluster.” There is a picture of a star’s birth in the Carina Nebula, and an image of the Southern Ring planetary nebula, which shows the final “performance” of a dying star. Hubble also has a picture of this nebula, and comparing the two shows how much more detail Webb gives us.

While scientists are wowed by the details of the cosmos Webb is and can deliver in the future, the engineering feat of building a telescope in space is also quite astounding. The Webb telescope had to be carried, dismantled, 1.5 million kilometres into space, then assembled there remotely. It was placed in a position where the sun’s gravitational pull is balanced by the earth’s pull, which the astrophysicists call a Lagrange point. One mistake—the engineering team had identified more than 300 possible mistakes—could have meant curtains for the mission: the $10-billion project would have been over before it could even start its work.

Webb has a 6.5-metre mirror that gives it six times the light-gathering surface of Hubble, increasing what it can see significantly. Unlike the Hubble, which uses visible light, Webb’s telescope is far more sensitive to heat, as it uses the infrared part of the spectrum. Therefore, it had to be deployed so far from the earth. The Webb also has a sunshade that keeps the mirror at -220 C, which is essential for it to function. Otherwise, its higher temperature would have drowned out the infrared radiation from distant stars.

While not all significant scientific advances entail huge costs, the major advances will increasingly require industrial-scale effort with large teams and budgets. Not that there will be no more of the individual brilliance of an Einstein or a Bose, but major advances in the experimental part of physics will require large budgets and teams. While people remember Higgs, they “forget” the Boson part of Higgs-Boson, named after Satyen Bose for his contributions. And this took place in a classroom exercise in quantum mechanics that Bose was doing for his students, which he later converted into a paper. Einstein helped with getting it published and extended it further in another paper, leading to what is known as Bose-Einstein statistics.

With its $10-billion cost, the Webb telescope is currently the most expensive instrument ever built, beating the Hadron Collider and its $4 billion costs to second place. Yes, it is expensive to advance knowledge today. But compared with an aircraft carrier, this is still less: Gerald Ford, the United States’ latest aircraft carrier, cost $13 billion. That is the travesty of human civilisation. We are willing to spend far more to destroy than to create, to satisfy the imperial needs of the rulers.

Undoubtedly, Webb’s telescope will open new vistas for astrophysicists. It may help find dark matter, which has proved elusive till now. Though a special telescope is being launched for this purpose, Webb will play an important complementary role. Second, it could help settle one of the biggest controversies in modern astronomy: what is the true expansion rate of the universe? This number, also called Hubble’s Constant, is the rate of cosmic expansion per megaparsec (roughly 3.26 million light-years) of space. Depending on the method used, the measurements of this number cluster around two values, 67 and 73. Given the high-precision agreements that exist for other cosmological measurements, these numbers are too far apart. While astrophysicists call this the “Hubble tension”, it is far better described as the Hubble headache.

One last comment about Webb. A number of scientists are bitter that this wonderful new observatory is named after Webb, a career bureaucrat who led NASA when the US Federal government and NASA actively followed a homophobic policy and sacked employees on this count. These scientists mounted a campaign to rename the Webb telescope the Harriet Tubman Space Telescope in memory of Harriet Tubman, who ran the underground railroad for those escaping slavery in the American South. I end with a quote from Chanda Prescod-Weinstein, Sarah Tuttle, Lucianne Walkowicz, and Brian Nord, the scientists who led this campaign: “The time for lionising leaders who acquiesced in a history of harm is over. We should name telescopes out of love for those who came before us and led the way to freedom—and out of love for those who are coming up after.” Not to celebrate those who helped deny us our freedoms. (IPA Service)