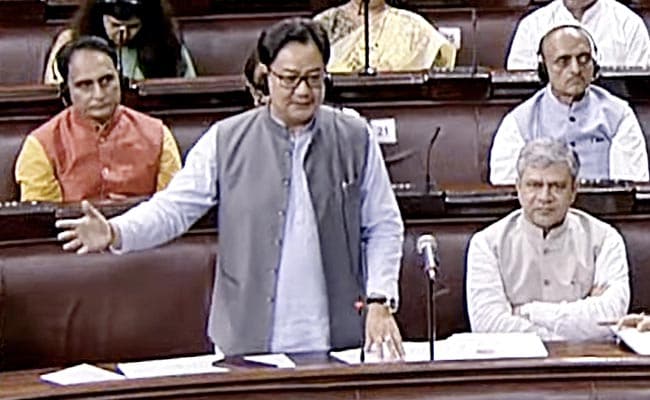 Union Law and Justice Minister Kiren Rijiju suggested there is a need to rethink the collegium system to expedite the process of appointment in higher judiciary as there are concerns about the existing process.

He said appointments in higher judiciary are “pending”, but “not due to the law minister but due to the system”.

“There is a need to think about the collegium system so that appointments in higher judiciary can be accelerated,” he said, speaking as the chief guest at the inauguration of two-day Union of India Counsel (West Zone) Conference on ‘Emerging Legal Issues-2022’ at Udaipur, Rajasthan.

Later when reporters asked him about his remarks, he said, “The system which is in place is causing trouble and everyone knows it. Further discussion will be held about what and how it has to be done. I put my views in front of everyone where judges, law officers and invitees were there.” Supreme Court judge Justice Ajay Rastogi, Rajasthan High Court acting Chief Justice MM Srivastava, Gujarat HC Chief Justice Arvind Kumar and Solicitor General of India Tushar Mehta also expressed their views in the inaugural session of the workshop.

Rijiju said, “If such issues are taken up in such conferences then people present come to know what’s there in the mind of the law minister and what the government is thinking. I have expressed my views and I have also listened to their views.” He said he raised the issue in Udaipur as several “appointments in Rajasthan High Court have to be done and they are pending”.

“The appointments are pending not due to the law minister but due to the system and that’s why I have put forth (my views) in front of you,” he said.

Supreme Court judges in the recent past have raised the issue of “delay” in the government clearing the names suggested by the collegium for appointments in higher judiciary.

The NDA government had in 2014 tried to change the system of appointing judges. The National Judicial Appointments Commission (NJAC) Act brought in 2014 would have accorded a major role to the executive in appointing judges to the higher judiciary. But it was struck down by the Supreme Court in 2015.

Rijiju also said on Saturday additional solicitor generals would be appointed in all high courts so that the Government of India could be effectively represented.

He said courts in the country are being digitised which would help people get information about their cases.

He also said the government is taking effective steps to improve infrastructure at high courts and lower courts.

He also said the government is working towards setting up a law academy.

He said 4.85 crore cases are pending in the country and the justice system needs to work effectively to address this pendency.

Speaking as a special guest, Union Minister of State for Law and Justice SP Baghel said there will be a brainstorming at this conference, from which concrete decision will emerge on strengthening democracy and its institutions.