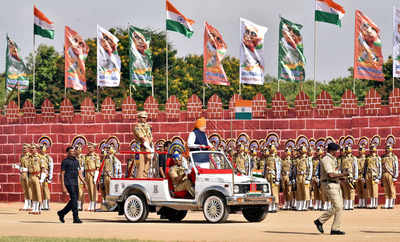 Union Home Minister Amit Shah’s convoy had to stop briefly at a Telangana Tourism hotel here, during his visit to the city on Saturday to attend the ‘Hyderabad Liberation Day’ celebrations, as a car obstructed its movement. Amid reports claiming that the car belonged to a TRS activist, BJP MP K Laxman said the incident should be investigated.

Police, however, said the brief halt was purely accidental as the car’s driver could not move the vehicle properly at that location. Shah held a meeting with state BJP leaders at the hotel.

During his visit to the city, he participated in the ‘Hyderabad Liberation Day’ celebration at the Parade Ground here to commemorate the merger of erstwhile Hyderabad State under Nizam rule with the Indian Union on September 17, 1948. Shah also attended a programme, where he distributed devices to ‘Divyangjan’ (persons with disabilities), on the occasion of Prime Minister Narendra Modi’s birthday.