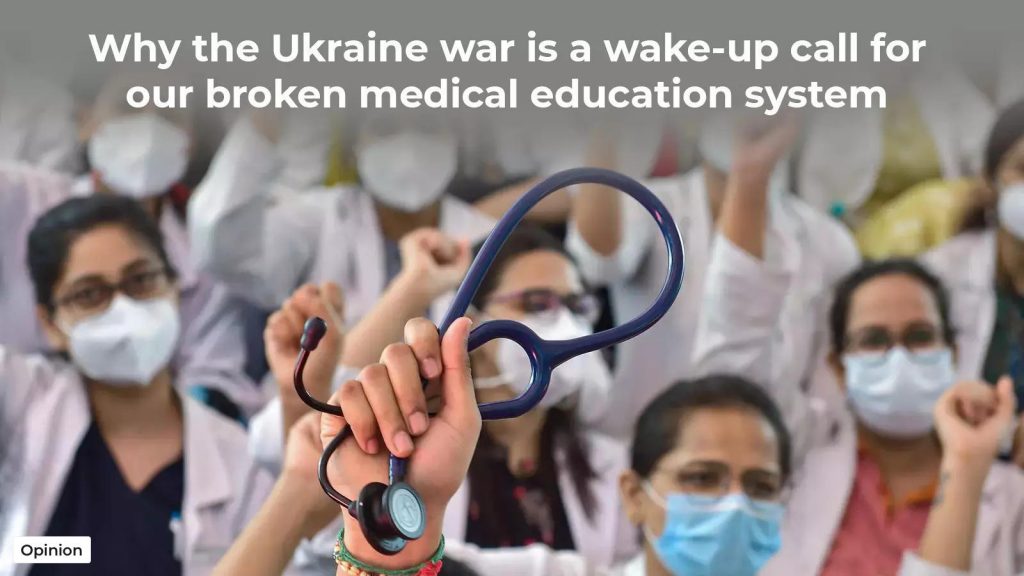 That the students from Sumy have been evacuated and are on way to western Ukraine is a matter of great satisfaction not just for the family but for the country as a whole. Better late than never; finally the Indian government woke up and took effective steps to plan this evacuation. War between Russia and Ukraine is threatening the lives of innocent citizens and destruction of resources. The danger of use of nuclear weapons in case of escalation of war cannot be ruled out.

Evacuation of the citizens from the war zones is extremely difficult task. Foreign nationals who want to go back to their families are hard put. Indian citizens, particularly the students, most of them under going education in the medical courses, have been facing difficult time. Whereas most of the countries took away their citizens back home from Ukraine, the government of India failed to act on time. This is despite several requests from the students to the embassy in Kyiv. When the war started, instead of organising evacuation of the students the Indian embassy in Ukraine only kept on issuing advisories to the students to reach borders of Poland or Romania.

It was a horrendous task for the students since from some places these borders are over 1500 kilo meters away. Several young boys and girls braved through the harsh weather and shelling to reach the borders. Patting his own back the Prime Minister and his cabinet colleagues however left no stone unturned in taking credit for what they had not done.  Evacuation means to bring a person out from the crisis area. But here the students walked several kilometres or paid exorbitant amount to hire vehicles to reach the borders from where they could take the journey back home safely

It is however unfortunate that instead of praising the students for showing bravery in crossing the borders, the question being raised is about their studies, their capabilities, their level of knowledge etc. So much is the lack of empathy at this hour of crisis that Union Minister for Parliamentary Affairs Pralhad Joshi instead of helping, castigated the students that 90 per cent of Indians who study abroad fail to pass qualifiers in India. He does not know that even to go abroad for MBBS studies the students have to pass the NEET.

The pertinent issue which has come to the fore now is why should Indian students opt for admission in the colleges abroad in such a large number? They are studying not only in Ukraine but in much larger number in the USA, Canada and China. Many are in Philippines, Kazakhstan, Kyrgyzstan and Bangladesh.

According to the website of the National Medical Commission (NMC) presently India has 605 medical colleges with 90825 seats for the under graduate course. Out of this 306 colleges with 45035 seats are in the state sector. The number of colleges in private sector is 289 with 43965 seats and others 10 colleges with 1825 seats.  The tuition fee in the private colleges ranges from 60 Lakh to over one crore rupees. This is far beyond the capacity of even the middle classes. Therefore the students look for relatively cost effective institutions. For study in the colleges abroad total cost including the travel and stay is around 30 Lakh rupees.

To get registered with the NMC these students have to clear the Foreign Medical Graduates Exam (FMGE). Those who pass this exam become at par with others. So to raise such frivolous issues of their standard of education is to hide the failure to provide medical education at affordable rates inside the country. Prime Minister has said that more medical colleges need to be opened in the country to prevent our students from going abroad and has called upon the private sector to come forward. This will not be helpful as the private sector’s motive is profit making. He has also said that half of the seats in these colleges will be free. This is not something that can be monitored easily.

We have the experience of how the private sector corporate hospitals who have reaped several benefits from the government and for which they are supposed to give affordable treatment to 25% beds, are evading their responsibility with impunity. The government had earlier come up with a proposal to hand over district hospitals to the medical colleges which will be operated by the private sector. It has been proposed that 50% patients will be given free treatment in these hospitals. Those interested in getting free treatment will have to get authorisation from the designated authority. This will leave the poor people running here and there for authorisation.

It is important to see that the career of these young students does not suffer. IT Cell trollers who are out to defame these students should be taken to task. Such words at a time when the students and their families are in so much trauma after the nightmarish experience and prevailing uncertainty can have adverse effect. They are now much worried about their future. Government should reassure that they will take up the matter with empathy. All efforts should be made for the continuation of their studies in Ukraine once the situation improves. It would be apt to wait for a period of six months. The decision of the NMC to allow internees to do internship in India is a welcome step. Others who are still in the graduation process should be assured that if things do not improve in Ukraine, they would be adjusted here in government colleges while charging the same fee as they had to pay in Ukraine. More medical colleges need to be opened in state sector.  To ameliorate the health crisis in remote areas an undertaking can be taken from the students to serve in the remote areas in state sector for a period from 5 to 10 years.

Post-Ukraine NATO Threat To Russia Is Far Greater Than Before
Posting....