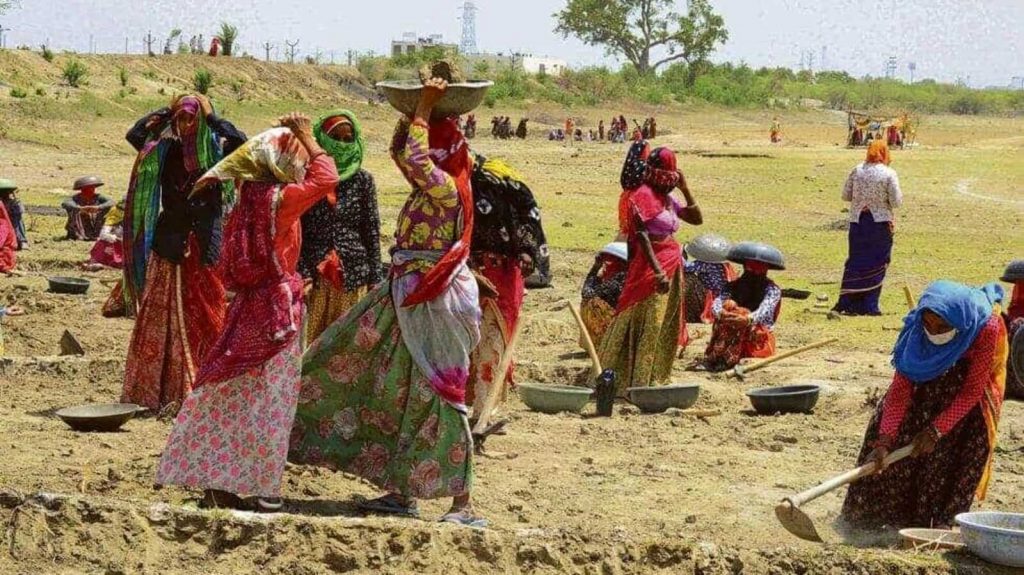 The Mahatma Gandhi National Rural Employment Guarantee Scheme, popularly known as MGNREGA scheme is systematically being sabotaged. It is being financially throttled by the Centre in many ways – by reducing budgetary provisions, not releasing funds in time, and resorting to political expediency by alleging the states for corruption in the scheme while taking little or no appropriate action against the culprits who are violating even the fundamental rights to life, liberty, and equality before the law apart from violating the statutory provisions of the National Rural Employment Guarantee Act (NREGA) 2005.

NREGA 2005 was enacted during Congress led UPA government at the Centre and now has been systematically victimized under PM Narendra Modi who has been leaving no stone unturned for his manifested dream of “Congress Mukt Bharat” (literally an India free of Congress). The hostility has gone beyond reasonable limit and the MGNREGA scheme became victim only because it was brought by the Congress, a process of sabotage began in which poor rural workforce suffered unfathomable miseries.

Since NREGA 2005 gave guarantee to all rural workforce whoever happen to demand work under the scheme. It was therefore demand driven. Without discouraging the demand the government could not have sabotaged it, and perhaps precisely for this reason working atmosphere was first vitiated through numerous ways so that poor workers do approach for work. Payments were kept low even below the minimum wages apart from making the process of getting work difficult and cumbersome. The workers were to be paid under the act within 15 days of the date due for payment, but it were delayed for months, making their survival even more difficult. Despite this ground reality demand for work continued increasing, which a Supreme Court judgment in 2016 said forced labour.

In the Swaraj Abhiyan case judgment (2016), the Supreme Court has said that delay in payment and non-payment of minimum wages was an abrogation of Article 23 of the Constitution of India, wherein NREGA workers were made to work, given late wages, workers have no choice but to work due to the severe constraints of economic circumstances – amounting to forced labour. Modi government’s action thereafter, and the worsening situation now six year after is indicative of the fact that the words of the Supreme Court fell into deaf ears.

The NREGA 2005 guarantee has utterly failed which affect the right to life and liberty of rural poor workers that violets Article 21 of the constitution, especially when neither work is available nor the proper wages in right time. Equality before law under Article 14 is also violated in several ways, especially in respect to working condition of officials and workers along with differential financial compensations. Officials are paid in time with higher wages and dearness allowances linked to inflation.

Modi government’s Union Budget 2022-23 even let down millions of desperate rural poor workers by reducing the MGNREGA budget by 25 per cent to Rs 73,000 crore which was even lower than the revised estimate for 2021-22, which was Rs98,000 crore at a time, Economic Survey 2021-22 had also admitted, when demand for work under the scheme was still higher than the pre-pandemic level. The centre clearly went against the “demand-driven” original concept of the scheme. Even two years ago the budget was Rs 110,000 crore. The pending liability at the time of the budget was around Rs 1000 crore. Out of the budgetary provision for the current financial year, two-third were already spent in the first four month ending July. We have eight months ahead and just one-third of the budget is left.

Therefore, Modi government is now resorted to a tactics for not releasing funds to the states allegedly on ground of corruption. Is corruption of central fund has gone beyond the controlling capacity of the Modi government? And must the poor rural workforce suffer for it? There are many more such questions that need answer, especially when both the opposition ruled as well as BJP or NDA ruled states are demanding more MGNREGA funds for rural job creation while they are bearing the brunt of protests in the last one year by MGNREGA workers demanding work opportunities, increasing wages at least to the minimum wages, timely payment, and assistance or compensation for work-related injuries. Restricting flow of funds to the states in the name of corruption seems to be just an excuse.

States on the other hand have been alleging restricted flow of funds from the centre which are much less than required. Too much centralization is weakening the local governance, and Central administration not honouring local priorities, almost dictating terms of implementation. Local bodies are being dictated by government officials, against whom there are allegations of corruption.

Since corruption is not a disease but only a symptom of maladministration in the government, the Centre cannot shed its responsibility in case of a centrally sponsored scheme by simply alleging the states for corruption. The river of maladministration in centrally sponsored schemes originates for the centre and flows down to the states and the panchayats.

Take example of setting up independent social audit units, if constituted, are supposed to work independently. They are supposed to be funded directly by the Centre, and are also not liable to the state government. However, the centre alleges that the states are not getting social audit done, while keeping large number of social audit unit unpaid even for over a year. How can one not find the centre guilty for not doing enough to end corruption in MGNREGA scheme?

NREGA 2005 provides for compensation for delay in payment of wages, but who cares? Neither unemployment allowance is paid to those who are not getting work under NREGA even if they demand word, nor is compensation being paid for delayed payment of wages to those who worked. Who is accountable for failure of Constitution or statutory guarantee given to the poor rural workers? Why there should be a cumbersome process of getting work, including attendance needing internet connection while there are connectivity issues in rural areas? Getting work has been made difficult in the name of tackling corruption, and in many cases even genuine job cared have been allegedly deleted.

MGNREGA workers’ protest in Delhi early this week will be followed by more protests. TMC of West Bengal will be protesting next week against withholding MGNREGA funds. Bihar has demanded 10 crore additional mandays under the scheme for job creation. Uttar Pradesh, Rajasthan, Odisha, Tamil Nadu, Karnataka, Punjab, Nagaland, and Manipur have already seen protests in the last one year and is threatening to spread across the country.(IPA Service)