Nadda to remain BJP chief until after 2024 elections 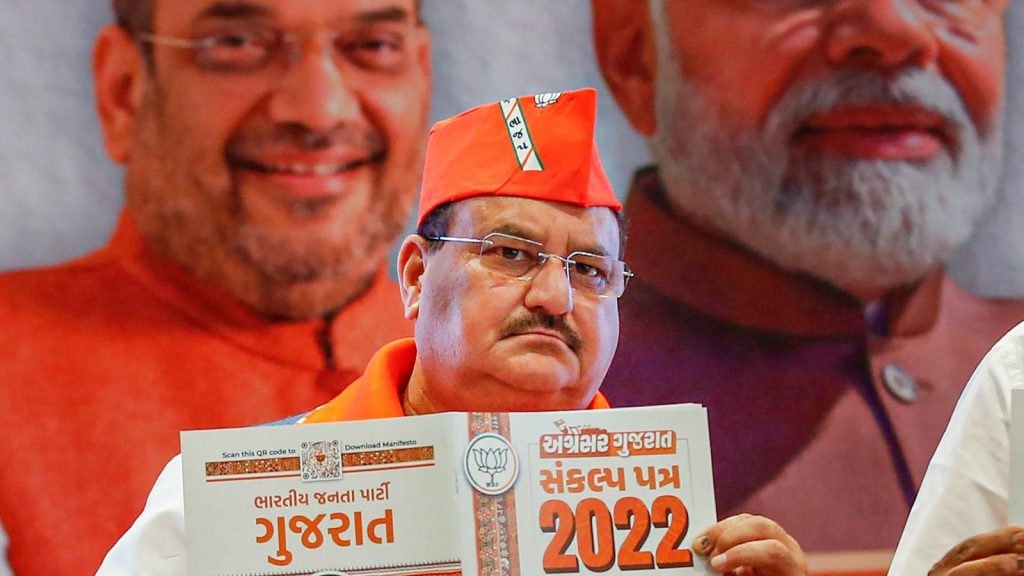 BJP president J P Nadda’s term was extended till June next year at the party’s national executive meeting on Tuesday, with Union Home Minister Amit Shah asserting that it will win the 2024 Lok Sabha polls with a bigger mandate than 2019.

The widely expected development underlines the party’s preference for continuity as it gears up for the all-important Lok Sabha polls next year, expected in April-May.

Shah told reporters here that Defence Minister Rajnath Singh, a former party president like him, moved the proposal of extending Nadda’s tenure till June next year and the executive unanimously endorsed it.

The BJP’s parliamentary board has already approved the extension of Nadda’s term as the party president.

“I, on behalf of the party, express heartfelt gratitude to Nadda-ji for his committed leadership and contributions, and extend the best wishes for his future term,” Shah said.

With Nadda set to lead the party during the Lok Sabha elections, he will be following the footsteps of his predecessor Shah, whose tenure was also extended so as to allow him to spearhead the organisation during the 2019 polls.

Shah expressed confidence that the BJP, under Prime Minister Narendra Modi and party chief Nadda, will achieve a bigger win than the last general elections.

The minister lauded Nadda’s leadership, saying he connected the party organisation with the service of people during the COVID-19 outbreak.

“During the pandemic, our party has done a lot of significant works under Nadda-ji’s leadership; be it about providing food and rations to the poor or taking people to hospitals for check-ups and treatment,” he added.

Shah further said that throughout Nadda’s leadership term, the BJP has worked on the principle of ‘Seva Hi Sangathan’ right from the booth till the national levels.

Noting that the party won many state assembly polls under Nadda, Shah said the BJP won 73 assembly bypolls out of 120 held during his tenure.

It was under Nadda’s leadership that the BJP performed well in Bihar, and again formed the government in Maharashtra and Haryana, he added.

The BJP won assembly polls in Assam, Manipur, Uttarakhand and Uttar Pradesh during Nadda’s tenure as the party president, Shah said, adding that it also formed the government on its own for the first time in Goa.

Talking about the recent victory in the Gujarat assembly polls, Shah said, “Under Nadda’s leadership, the BJP organisation converted Modi’s magical leadership into votes and the party registered a record-breaking victory by winning 156 assembly seats.” He further said that the booth strengthening programme and the ‘Vijay Sanklap Rally’ are among the biggest takeaways of Nadda’s leadership.

Nadda had become the BJP president on January 20, 2020 for a term of three years.

Farooq says no end to terrorism until talks with ‘neighbour’