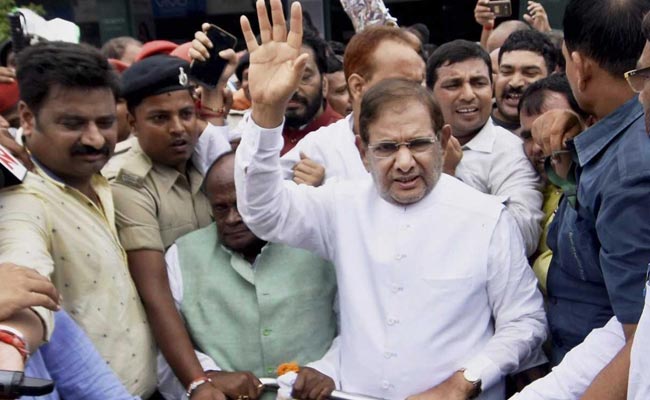 Prime Minister Narendra Modi led the nation in offering condolences after former union minister and RJD leader Sharad Yadav passed away at the age of 75 at a private hospital in Gurugram.

Taking to Twitter, the prime minister said, “Pained by the passing away of Shri Sharad Yadav Ji. In his long years in public life, he distinguished himself as MP and Minister. He was greatly inspired by Dr. Lohia’s ideals.”

“I will always cherish our interactions,” Modi added.

Pained by the passing away of Shri Sharad Yadav Ji. In his long years in public life, he distinguished himself as MP and Minister. He was greatly inspired by Dr. Lohia’s ideals. I will always cherish our interactions. Condolences to his family and admirers. Om Shanti.— Narendra Modi (@narendramodi) January 12, 2023

Union Defense Minister Ranjith Singh offered his condolences and recalled Yadav’s “long political career” in which he “always strongly raised the problems of the weaker sections of the society.”

In a tweet, Shah wrote, “Received the sad news of Sharad Yadav’s demise. Sharad Yadav ji made his valuable contribution in Bihar and Indian politics for decades. In this hour of grief, I express my condolences to his family and supporters. May God give the departed soul a place at his holy feet.”

Calling him “a stalwart politician and an immensely respected colleague,” Bengal Chief Minister Mamata Banerjee offered her respects to Yadav and hope for his legacy to live on.

I bear a heavy heart upon hearing about Shri Sharad Yadav’s demise.A stalwart politician and an immensely respected colleague, his legacy shall live on.

I pray that his family and followers find solace and strength in this hour of grief.

Former Uttar Pradesh Chief Minister and Samajwadi Party leader Akhilesh Yadav offered his “humble tribute” to Sharad by posting a picture of him on his social media account.

Deputy Chief Minister of Bihar Tejaswi Yadav took to twitter to offer condolences to his “guardian and a great socialist.”

“I am unable to say anything,” Yadav highlighted.

In a tweet, he wrote, “I am saddened by the news of the untimely demise of Mandal Messiah, senior leader of RJD, great socialist leader and my guardian respected Sharad Yadav ji. I am unable to say anything.”

“Had a conversation with mother and brother Shantanu. In this hour of grief, the entire Samajwadi family is with the family members,” he added.

A statement from the Fortis Memorial Research Institute said Yadav was brought to the emergency ward in an unconscious and unresponsive state. “On examination, he did not have any pulse or recordable blood pressure. He underwent CPR as per ACLS protocols. Despite best efforts, he could not be revived and was declared dead at 10.19 pm,” the statement said. PTI

According to sources, the former JD(U) chief was fine till the afternoon but later faced some health issues after which he was taken to the hospital.

Yadav held various portfolios in the Atal Bihari Vajpayee government between the years 1999 and 2004.