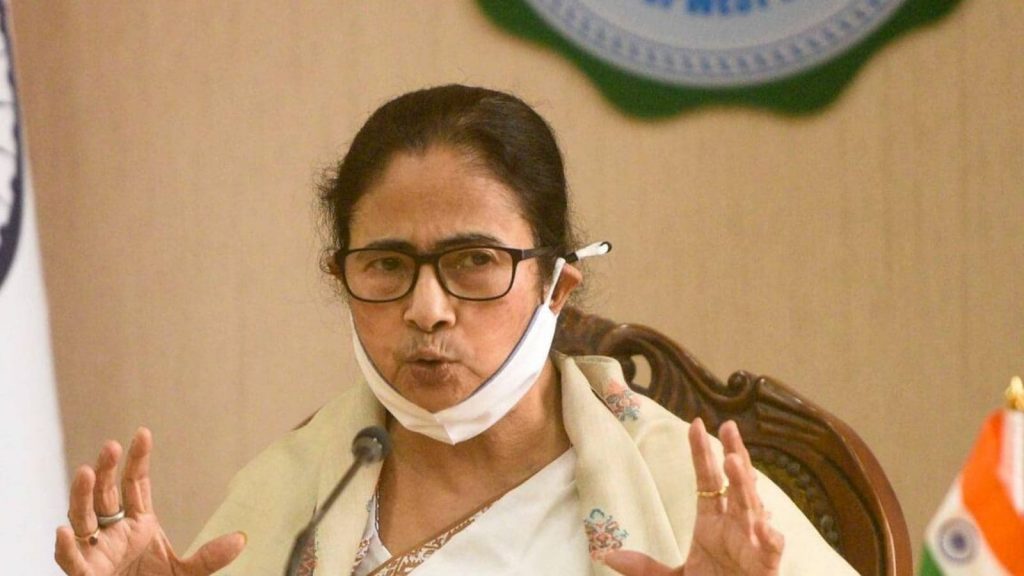 Having reached out to regional satraps M K Stalin and K Chandrasekhar Rao to push for an anti-BJP alliance a day before, West Bengal Chief Minister Mamata Banerjee on Monday sought to edge the Congress out of any such prospective formation, saying no regional outfit shares cordial relations with it and that the “Congress can go its own way”. Amid signs of increasing bonhomie between her and her Telangana and Tamil Nadu counterparts Rao and Stalin, Banerjee had approached the two on Sunday to set up meetings of opposition chief ministers.

“The country’s federal structure has been bulldozed…the country’s Constitution is being demolished. We all need to come together to protect it,” she said on Monday after her party TMC swept the elections to four municipal corporations in West Bengal, dealing yet another body blow to the BJP after the saffron party’s humiliation in the assembly elections in 2021. “Together we are trying to protect the federal structure. All regional parties must come to an understanding,” she said, referring to her telephone calls to Rao and Stalin.

Banerjee, who has intensified her efforts to form a coalition of opposition parties after she fell out with the Congress over cobbling together an alliance in Goa, claimed no regional outfit is on friendly terms with the main opposition party. “The Congress can go its way, we will go ours,” she asserted.

Interestingly, Congress is an alliance partner of the DMK in Tamil Nadu. After a call from Banerjee, Rao said on Sunday he will soon meet Maharashtra Chief Minister Uddhav Thackeray and the TMC supremo as part of the efforts to unite various political parties against the BJP.

“Mamata Behen ( Mamata Banerjee) called me. We had a discussion over phone. She invited me to Bengal or she’ll come to Hyderabad. She said mujhe dosa khilao. I said most welcome. She may come any time. We are discussing. There are so many political leaders across the nation,” Rao said when asked if he is still mooting the idea of a non-BJP, non-Congress Front. Banerjee and Stalin, who share a common grouse over the actions of the governors of their respective states-Jagdeep Dhankhar and R N Ravi-also spoke on Sunday.

“Beloved Didi Mamata Banerjee telephoned me to share her concern and anguish on the Constitutional overstepping and brazen misuse of power by the Governors of non-BJP ruled states,” Stalin tweeted after the call. “She suggested for a meeting of Opposition CMs. I assured her of DMK’s commitment to uphold State autonomy. Convention of Opposition CMs will soon happen out of Delhi!,” he said.

Banerjee, who had visited Uttar Pradesh last week to campaign for the Samajwadi Party (SP), contended her TMC decided against contesting elections in that state in “the larger interest”. “The TMC did not field any candidate in UP as I did not want Akhilesh Yadav (SP chief) to get weak in any seat. In the first phase, I am hoping Akhilesh’s party will win 37 of 57 seats,” she told a news channel. Polling was held for 58 assembly seats in the first phase on Thursday.

The West Bengal chief minister also said she would again visit UP on March 3 to hold a rally in Varanasi, Prime Minister Narendra Modi’s parliamentary constituency, to canvass for the Samajwadi Party. “The country can be saved only if UP is protected (against the BJP). If we want to defeat Narendra Modi in 2024, big states like UP and Bengal will matter the most,” she said.

Hitting out at her UP counterpart Yogi Adityanath, Banerjee claimed, “Women are burnt alive and peasants get murdered in that state. The CM there is not a ‘yogi’ but a ‘bhogi’. If India has to be saved, UP will have to be saved first.” Banerjee said she had asked the Congress and the Left to come together with other opposition parties against the BJP but they did not pay heed.”It’s the duty of those who claim themselves to be secular to bring everyone on one platform. I had asked the Congress and the CPI(M) to join hands… If they do not listen, there is nothing that I can do.” .