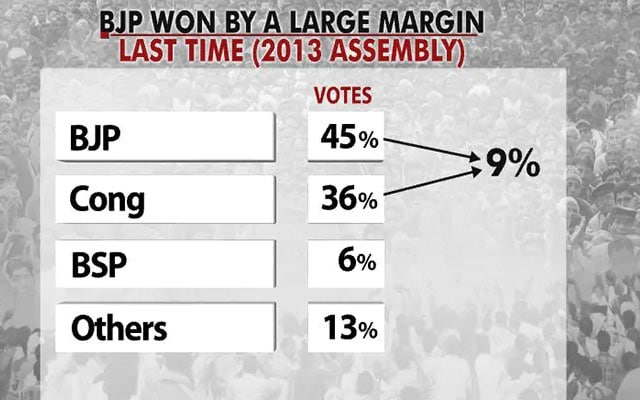 BHOPAL: With the announcement of election schedule of local bodies, Madhya Pradesh is in the grip of election fever. Because of Covid-19 election is late by two years. During the last two years local bodies were being governed by officials.

Besides the two major parties – BJP and Congress – several other small parties have also started preparation to enter the fray. As always elections have given rise to bickering in the parties. Previously only Congress used to be affected by internal feuds but this time even the BJP has also been affected by factionalism. It is with the entry of Jyotiraditya Scindia the BJP is facing the problem of factionalism.

Scindia supporters are claiming share in allocation of candidature for various posts in local bodies. In order to press their claim followers of Scindia have started chalking out their strategy. With this objective they have gathered in New Delhi. It will be interesting to watch how the central leadership resolves this problem. It would be necessary for the leadership to strike a balance between Scindia followers and old members of the party while allocating tickets. As matters stand Scindia will press for Lions share in Gwalior region.

Elections to local bodies occupy crucial importance for both BJP and Congress especially in view of the fact that Vidhan Sabha elections are scheduled to be held next year. Whosoever gets majority in local bodies may hope to capture in the Vidhan Sabha. For BJP these elections are crucial specially due to the fact that it lost power in 2018 Vidhan Sabha polls. The BJP does not want to take risk. Therefore central leaderships is paying special attention to Madhya Pradesh. Already two central leaders have visited Madhya Pradesh and interacted with party workers of every rank.

A few days back Home Minister visited Madhya Pradesh. After that came J. P. Nadda, party president. Besides Bhopal he visited Jabalpur. Jabalpur happens to be his in laws town. Both Shah and Nadda were accorded huge welcome of the scale which is accorded to Prime Minister Narendra Modi. During his visit to both Bhopal and Jabalpur Nadda gave clear cut indication that Madhya Pradesh chief minister Shivraj Singh Chouhan and state chief V D Sharma will lead BJP into the battlefield in 2023. “Why do we have to uproot the plant every time to see if the roots are growing? The plant is firmly rooted. Everything is right, all are working. The government is doing a good job under the leadership of Shivraj Singh Chouhan” he said.

Asked if BJP will give candidature to sons of influential leaders seeking tickets in the upcoming civic body elections, Nadda said that dynastic politics will not be entertained in the party. BJP is trying to change the the definition of India’s dynastic politics. “We wish to to make the fundamentals of dynastic politics clear. By dynastic politics we mean the father is president of the political party while the son is general secretary. The Parliamentary Board of many parties is full of ‘chachas’ ‘tai’ and ‘taus’ (uncles and aunts). PDP and National Conference in Jammu and Kashmir, Lok Dal in Haryana, Shiromani Akali Dal in Punjab, Samajwadi Party in Uttar Pradesh, Rashtriya Janata Dal in Bihar, Trinmool Congress in West Bengal, DMK in Tamil Nadu, Shiv Sena and NCP in Maharashtra are such parties” Nadda said.

He recalled that during the last by-polls in the state in three assembly seats and Khandwa Lok Sabha seat it was suggested that sons of leaders be given tickets. “Leaders of Madhya Pradesh said that it would be difficult if sons of deceased leaders were not given candidature. I said let there be difficulty even if we lose. If the party keeps giving tickets to sons of leaders where will party workers go”? Nadda said.

It was a ‘painful operation’ but since it is party policy, it will have to be followed, he remarked. Nadda said that many relatives of leaders are capable of winning but were denied candidature. “The wards and kin of leaders working for the party will be given organisational work but not tickets to contest elections, Not just the local body polls, this will be followed in every election” he said.

All the parties have started preparation for the poll of local bodies. As usual in this matter BJP is ahead of other parties. As is well-known the BJP chief minister Shiv Raj Singh Chouhan has acquired mastery of using unique methods to win over voters. This time he has launched a campaign to collect old toys from people. After Bhopal he pulled handcart in around 800 meter stretch in Indore’s Lodhipura area and sought public support in terms of toys, books, grains and cash donation for Anganwadi children.

The event saw thousands of people donating fans, TVs and other essential items that help in upgrading Anganwadis.

According to officials, the same event in Bhopal led by the CM around a week ago had generated about 80 lakh Rs cash along with 10 trucks loaded with toys, books and such other items meant for Anganwadi.

“Today I collected items for Anagawadi of Indore. Generous people of Indore brought items loaded in vehicles, which was not possible to carry in the handcart and therefore I have instructed the officials to send the same to Anganwadis ” the CM told media persons, adding “I want to make the fight against malnourishment a public movement” In Indore, all 1839 Anganwadis, with 3.75 lakh children have been adopted by Indoreans. (IPA Service)

Caste Census Has Now Emerged As A Major Issue For Political Parties
Posting....