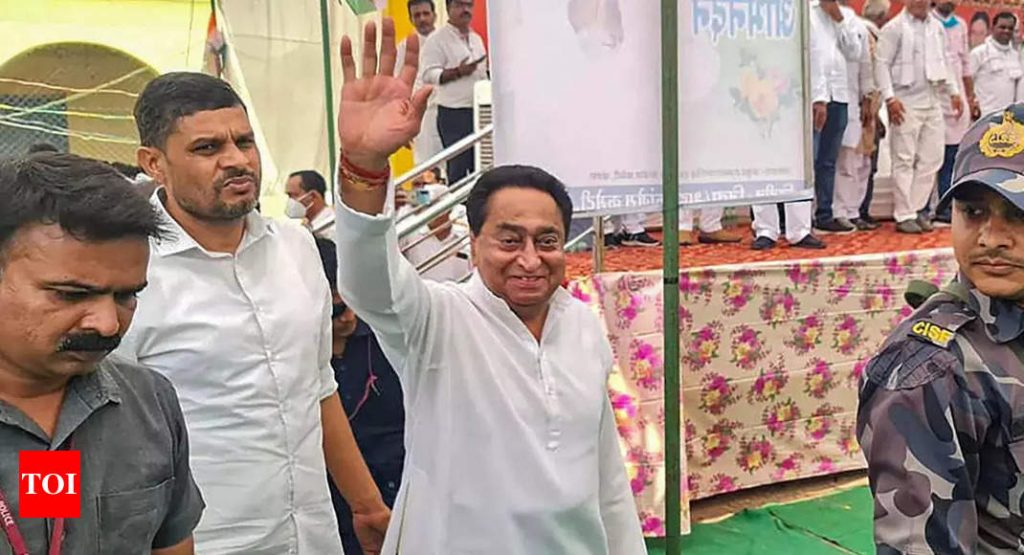 BHOPAL: As a part of preparation for the 2023 Vidhan Sabha elections, Madhya Pradesh Congress President and Leader of Opposition Kamal Nath has constituted a broad based committee of more than forty members drawn from various factions of the state Congress.

A PCC office bearer, on the condition of anonymity said that having a political affairs committee in any party is not uncommon but PCC political affairs committee has been constituted at a time when discord in the state Congress and differences among the top party leaders of the state were emerging. Some leaders like Ajay Singh and Arun Yadav were feeling neglected . It appears to be an attempt to bring all the top leaders on one forum and ensure regular interactions, which has been missing so far.

PCC media coordinator Narendra Saluja, when asked about the objective of having a political affairs committee with almost all the top Congress leaders of the state said “Elections are coming. The committee will take stock of the political situation in the state. They will meet every 7-10 days and discuss the prevalent political situation ad issues that crop up from time to time. They will also work on the strategy for the state assembly election due in 2023”.

Targeting the BJP government over increasing prices of essential commodities and fuel, the Congress asked the ruling BJP if it at all understands the woe of the common man.

“Is in the eyes of BJP rising prices of petroleum products a cause of concern.” Asked AICC spokesperson Ragini Nayak while addressing media persons in Bhopal. Congress leader criticized the government over rising fuel prices, LPG and other essential items and highlighted its impact on the public.

Accusing the NDA government at the Centre and the BJP government in the state of not doing anything to check inflation, Nayak said that in the present scenario people are crushed under the double engine government.

“Government of India increasing the cost of petroleum products everyday and the Madhya Pradesh state government is not giving them any relief through their tax exemptions,” said the Congress leader. “In the last 17 days, the prices of petrol and diesel have been increased 14 times, resulting in a hike of Rs. 10 for both the fuels.

She related the price hike to elections. “When the elections were going on in the states no price hike was done, but as the elections are over now the GoI has started showing its real face. Everyday 80 paise is increased in Petrol, why?”.

“In the current year the people of the country will be going to pay Rs. 28,000 crore extra while buying petrol and Rs. 2700 crore more while buying diesel. This is the relief model of the government of India of post covid rehabilitation,” she said.

She also alleged that the GoI has increased the prices of 800 essential drugs to more than 11 per cent. Now when the people are not in position to purchase their essential medicines, because they had lost their livelihood in the corona pandemic the GoI have given one more setback”.

“The GoI always talks about the welfare of the farmers, but the reality is that the government is going to earn Rs. 36,000 crore while selling the DAP fertilizer”. He alleged.

Meanwhile the Congress has also intensified agitation protesting against the rise of prices of various essential commodities.  The party is adopting some unique strategies to give expression to people’s anger. For example party workers in Bhopal made garlands of various commodities and wore them while sitting on dharna.  in Bhopal and other towns.

The Congress has questioned the strategy adopted by the administration to terrorise criminals if  they do not desist from committing crimes. According to this strategy the Police is asked to demolish houses of alleged criminals who are found involved in committing crimes. If a person on preliminary enquiry is found involved in a crime his house is ordered to be demolished. It is felt that this policy is arbitrary. Even if a person is found involved in crime there is no logic to punish the whole family. The Congress has termed this policy arbitrary, cruel and violation of human rights.

Talking to media senior Congress legislator Dr. Govind Singh said in the pretext of this policy the BJP is targeting Congress leaders and demolishing their houses. He has asked government to forthwith stop this policy. “If the government does not stop this extra-legal practice the Congress will have no other option but to launch agitation. (IPA Service)

Supreme Court Rebuking Central Agencies For Their Stand On Bail Is Welcome
Posting....