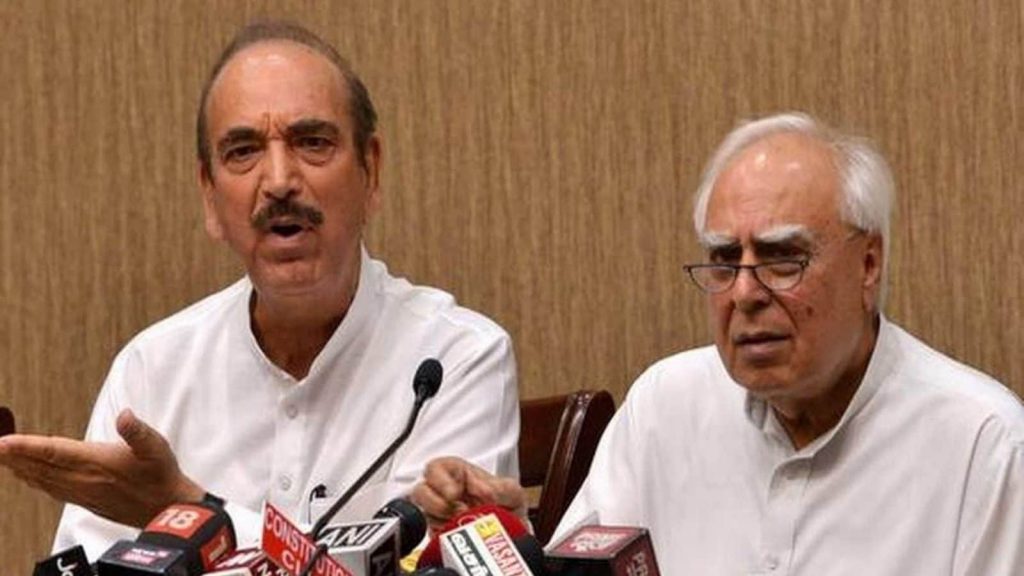 Reflecting the dissensions in the party, senior Congress leaders lashed out at their colleague Kapil Sibal for his remarks against the leadership, with Rajasthan chief minister Ashok Gehlot saying that the senior lawyer is ‘not rooted in Congress culture’, and he ‘doesn’t know ABC of the Congress’. Gehlot’s Chhattisgarh counterpart Bhupesh Baghel issued a warning saying that those who talked about the destruction of Congress were erased.

Sibal came under attack by his party colleagues after he said that the Gandhis should step aside and give some other leader a chance to lead the party. “Leadership is in cuckoo land…. I want a ‘Sab ki Congress’. Some want a ‘Ghar ki Congress’,” he told the Indian Express in an interview.

The remarks came after the Congress Working Committee (CWC) met on Sunday and after almost five hours of deliberations, urged Sonia Gandhi to continue to lead the party and initiate changes to strengthen it. The CWC also rejected Gandhi’s proposal to make any and every sacrifice for the party, which was construed by some as an offer from the Gandhi family to step aside, and reposed faith in her leadership.

Refuting Sibal, Baghel said that the grand old party is already “Sab ki Congress”, “Ghar ki Congress”. “…But some people want to make it Congress of ‘dinner’ and ‘bungalow’. Go to UP once to see how the leadership fought. All those who kept talking about the destruction of Congress were erased,” he tweeted in Hindi.

Gehlot termed Sibal’s comment “unfortunate”. “At a time when the party is losing elections, the leaders should stand united,” he told reporters in Jaipur. The CM asserted that the Congress is the only party that can fight against the ruling BJP and praised Rahul Gandhi for taking on Prime Minister Narendra Modi. “Those who are talking about finishing the Congress party will themselves get finished. The Congress is a years-old party and our leaders have made supreme sacrifices before and after the independence,” he said.

Manickam Tagore, a staunch Rahul Gandhi loyalist, said the Rashtriya Swayamsevak Sangh (RSS) and the Bharatiya Janata Party (BJP) want the Gandhis to be out of leadership positions in the Congress to kill the party and destroy the idea of India.

National spokesperson of the Congress Pawan Khera said Sibal should contest the election for the post of Congress president, instead of making public comments against the party leadership. “Why RSS and BJP wants Nehru-Gandhi’s out of the leadership? Because without Gandhi’s leadership Congress will be become Janata party. It’s easy to kill Congress then it’s easy to destroy the idea of India (sic),” Tagore said on Twitter.

“Kapil Sibal knows it but why he is speaking the language of RSS/BJP?” the Congress’s whip in the Lok Sabha asked. Khera also put out a tweet, hitting out at Sibal.

“Dr Harshvardhan did not ask you to step aside from Chandni Chowk. He fought an election and defeated you Kapil Sibal. Those who want to lead Congress are free to fight upcoming election for the position of party president instead of chanting everyday against current leadership,” he said.

Senior Congress leader and former Union minister Salman Khurshid also criticised Sibal’s comment, saying it does not help the party as all such matters should be discussed within the organisation and not in the public domain. Hitting out at those raising questions over the top Congress leadership following the party’s debacle in the just-concluded Assembly polls, he wondered whether such questions were asked when other parties suffered electoral defeats.

The Congress put out a video of its former leaders, including Mahatma Gandhi, Jawaharlal Nehru and Indira Gandhi, on its Twitter handle. “We will fight on. We will overcome. We will continue to raise your voice,” the grand old party said.