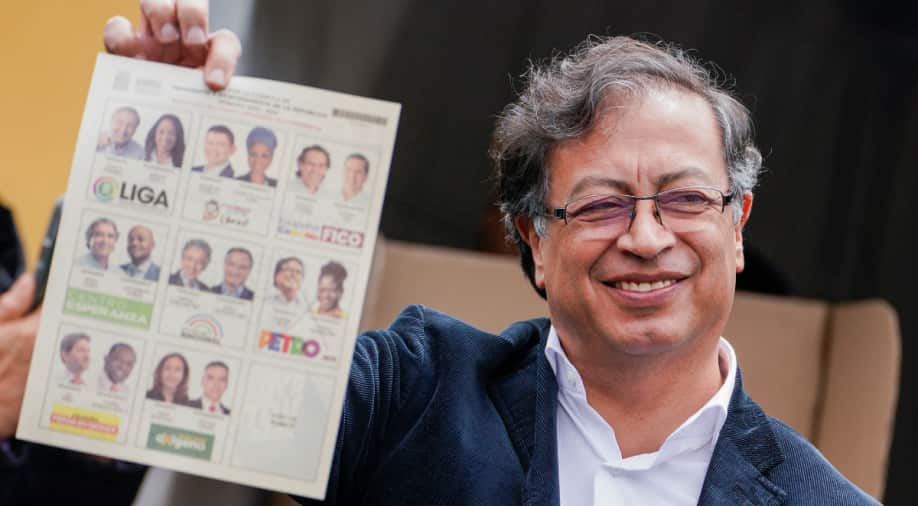 The politics in Latin America took a definitive left wing shift on Sunday May 29 as the people of Columbia voted the candidate of the anti-establishment coalition Gustavo Petro as the top candidate with 40.3 per cent votes, followed by the surprise businessman candidate Rodolfo Hernandezwhogot28.2 per cent. Both of them will have a face off on June19 to elect the President of the country.

The voting results in the first round are according to the expectations of Gustavo Petro, the former leader of the guerrilla forces and the former mayor of Bogota but the political observers were surprised at the performance of Hernandez who is also against the policies of the present right wing government and fought the elections on the issue of removing corruption. That way the runoff is now limited to the two candidates both anti-establishment- Petro a long time fighter with his pro-people programme and Hernandez with his programme on anti-corruption and exposure of the serving politicians misdeeds.

The upshot of the first round of elections is that the conservatives have lost heavily and this is a paradigm shift in the political mood of this South American nation which has been ruled   by the   rightwing oligarchs for decades. Columbia has always been known as the staunch ally of the US Government and the country is known for drug trafficking and mafia rule. Petro’s win in the first round has galvanized the left coalition partners and all efforts are being made to mobilise the anti-right centrists and other independent organisations in favour of Petro in the final round on June9.

Surveys ahead of the first round showed Hernandez – who now has the support of third place candidate Federico Gutierrez and many of his supporters – would lag just a few points behind Petro in a run-off vote. This means that the left coalition has tough tasks in hand and they will   have to tap every section of the electorate who are against the rightwing policies and want change.

Petro, a 62-year-old former mayor of Bogota, has consistently led opinion polls on promises to redistribute pensions, offer free public university and begin to change what he says are centuries of profound inequality. “What’s not in doubt today is change,” Petro told cheering supporters in central Bogota. “Now it’s about seeing what we will do with Colombia, what Colombian society wants for it’s own country.”Corruption isn’t fought with slogans on TikTok,” Petro added, a jab at Hernandez’s popularity on the social media app.

Youth are a major demographic for Petro, who had about 50% support in opinion polls from the country’s youngest voters. His campaign ramped up efforts to encourage youth turn-out in the last few days, acknowledging that young people may need an extra push to vote over a holiday weekend. Petro has rejected oft-repeated accusations he will follow the policies of deceased former Venezuelan President Hugo Chavez and his successor Nicolas Maduro. Venezuela is being shown by the right wing campaigners as the model which Petro will follow if he comes to power. But the left coalition has promised protection of democratic rights and rebuffed any campaign comparing Petro to Maduro.

Petro has clean image and he has substantial experience in administration as the former mayor of Bogota. As a senior leader in the senate, he has dealt with the leaders of the other political parties. Hernandez is a popular figure in social media and he has enough funds also to influence the fence sitters to vote for him in the final round where the president will be elected by just majority votes. Yet, what is significant is that a section of the far   right may not vote at all as they are jittery about Hernandez capturing the stature of the main anti-left leader to challenge Petro.

Political observers note that the 2018 presidential election bears many resemblances with the current 2022 contest. In both, the entire Colombian economic and political establishment banded together to demonize the progressive candidacies of Gustavo Petro and his then running mate, Ángela María Robledo. The incumbent right wing president Duque won at that time but the ground was being prepared for change. The massive movements by the anti-right   demonstrators went   to its   peak in 2021and Petro very judiciously formed his coalition bringing under its   fold   all   shades of anti-oligarchy   forces.

For the first time in the history of Columbia, the runoff presidential election on June 19 offers   a real possibility of a radical change in the nation’s history. If Gustavo Petro finally wins, that   will have big impact on the coming presidential elections in Brazil in October this year where former left wing president Lula is the frontrunner in the opinion polls against the right wing president Jair Bolsonaro. The entire Latin American people are waiting for the verdict of the Columbian people on June 19. (IPA Service)