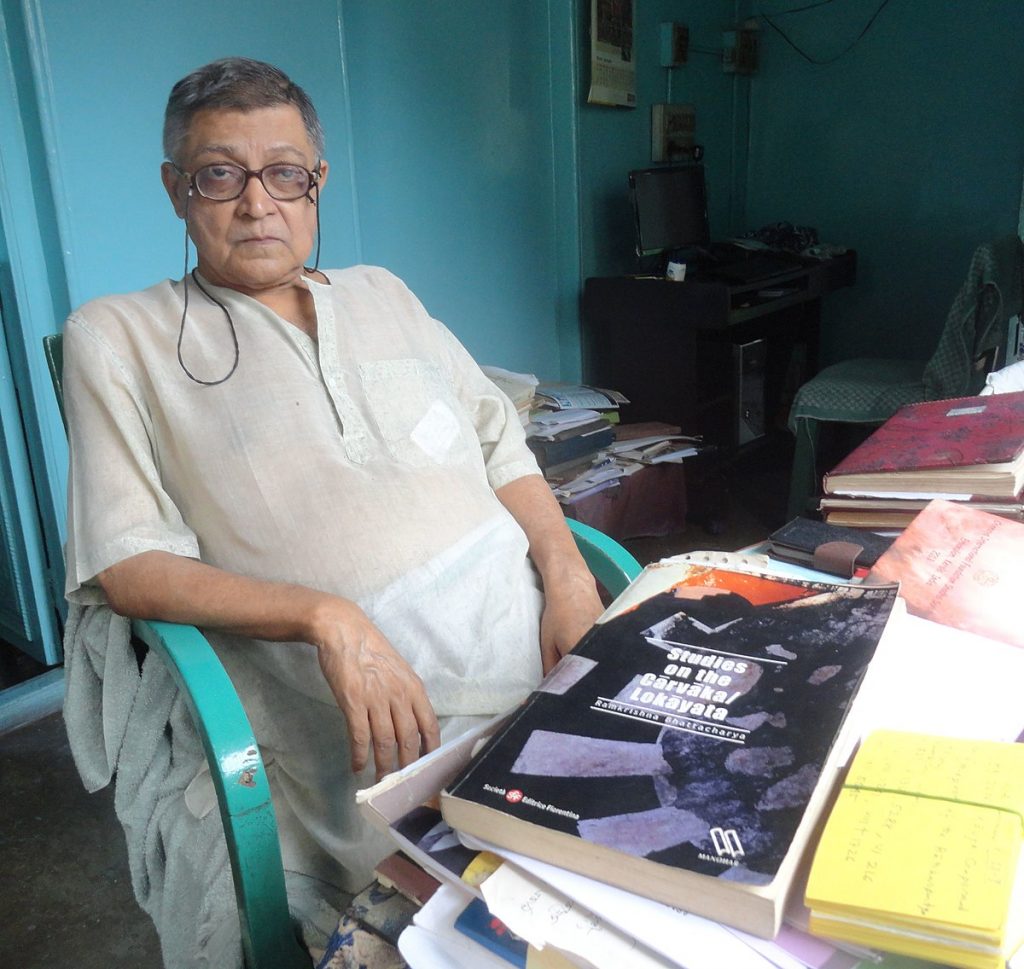 Dr. Ramkrishna Bhattacharya, a renowned Kolkata based Marxist scholar passed away  in a city hospital on October 2. He was 74. An unrepentant old-fashioned Marxist, Ramkrishna Bhattacharya preferred, for the most part of his life, to work for the ‘party in the broad historical sense’, as envisaged by Marx in a letter (29 February 1860) to Ferdinand Freiligrath. Of course, during his student life Bhattacharya was involved in active party politics and even became the President of the Bengal Provincial Student Federation. However, he resigned from the post following the invasion of Czechoslovak Socialist Republic by the Warsaw Pact countries headed by the then USSR in 1968. Gradually Bhattacharya withdrew himself from active Left politics which he came to see as increasingly getting tied up with the electoral mechanism. His faith in Marxism as a radical philosophy was never shaken.

Marxism, for Bhattacharya, was primarily a worldview and its objective was to overthrow the capitalist system. He accepted that it has to be a long unabated struggle (by no means to be completed in one’s lifetime) to spread ideas conducive to bring about a qualitative change in the prevalent socio-economic set-up. It was Bhattacharya’s sincere belief that as agents of socio-economic change human beings must undergo a process of change themselves. It was with this intention that he, through his varied and copious writings, launched a relentless effort to create a scientific temperament among his readers necessary for establishing socialism. He set for himself the task of a marathoner, not bothered about short-term electoral politics.

Bhattacharya always believed that Marxism is not merely a political programme. In fact, its philosophical basis of dialectical materialism taught him to view the past and the present as a continuous process of struggle against oppression, both economic and ideological. It is for this reason that Bhattacharya, inspired by the late and Debiprasad Chattopadhyaya, studied, researched and championed the Carvaka/Lokayata, the materialist school of Indian philosophy. Besides, Bhattacharya also understood the significance of the post-Renaissance European materialist philosophy as regards the emergence of Marxism. It is for this reason, he made critical investigations into the nineteenth-century Bengali rationalist and materialist thinkers, focusing particularly on the outlook of Iswarchandra Vidyasagar in the context of his lifelong fight against obscurantism and bigotry. Bhattacharya had always acknowledged the progressive role played by an individual in history while, at the same time, accepting his/ her limitations imposed by time, place and circumstances. This dialectical approach and the long view of history have together been the guiding principle for Bhattacharya.

Marxism, for Bhattacharya, was a working principle, not a closed philosophy. He, therefore, appreciated the pioneering roles of D D Kosambi, Bhupendranath Dutta and Rahul Sankrityayan, writing extensively on the creative application of Marxism in their respective fields of inquiry. Bhattacharya believed that an individual, working even in unconducive times, can leave a lasting impact on the posterity. Not only he had a longer perspective on history but also an inveterate optimism about human civilisation. No doubt, this conviction stemmed out of Bhattacharya’s hope for a socialist future. He advocated others who (at the same time he himself tried) lit a lamp, as per a Chinese proverb, instead of cursing darkness.

Ramkrishna Bhattacharya was, at the same time, at home with English and Bangla. But he wrote more in Bangla in both renowned and obscure little magazines and periodicals. In fact, it was his lifelong uncompromising attitude to avoid the corporate-sponsored big publishing houses (in spite of ‘offers’ from them) for publicity and/ or honorarium. Moreover, he was equally sincere about the form of his essays and articles. In fact, Bhattacharya can be considered as one of the important Bangla prose writers of the present age. His dedication for research methodology is also noteworthy.

Bhattacharya has worked exhaustively on Marxist aesthetics, materialist philosophy and dialectics. What is significant in these and all his other books is his use of lucid prose. He made a point that his writings should be intelligible to both the initiated and uninitiated reader. Reading and writing for him was an illustration of his socialist mission. Bhattacharya wanted his work to reach as many people as possible who would all contribute in their own ways to build a better future.

Ramkrishna Bhattacharya, lest we forget, was a professor of English literature at both under-graduate and post-graduate levels. He not only excelled at and inspired many students with his classroom teaching but also contributed significantly to research in English studies. Moreover, his researches on Aristotle’s Poetics and Sophocles’ King Oedipus are also noteworthy.

Always keeping himself away from the glare of publicity, Bhattacharya, had a circle of associates, friends and colleagues and students, where he was in his elements. He had a liking for humour which his critics had no idea about. A relatively unknown fact about him is that he wrote for children in his inimitable prose style using the pseudonym of Angshu Mitra. A life dedicated to reading and writing, Ramkrishna Bhattacharya will be remembered by his works (many writings are made available for free on academia.edu) and a man who fought obscurantism, both old and new, and sowed the seeds of change in the minds of his readers. Such a man is indeed a rarity in these days. (IPA Service)

Rahul Gandhi Is Getting Massive Response In Karnataka During Yatra
Posting....