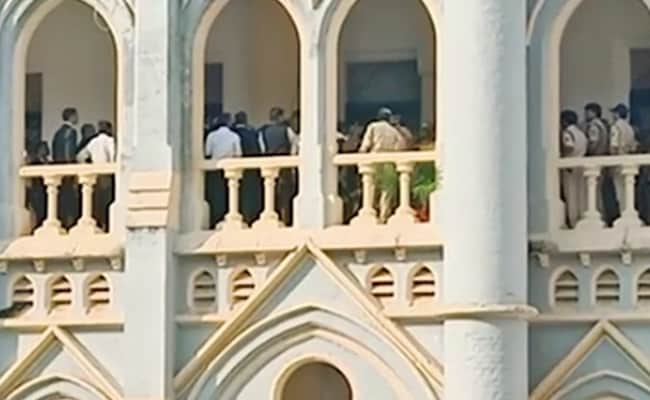 Hours after a lawyer died by suicide allegedly after an altercation with a judge at the High Court in Madhya Pradesh’s Jabalpur, protesting lawyers went on a rampage and took his body to the court premises. They vandalised courtrooms and set fire to the office of a senior advocate.

The lawyer who died by suicide, Anurag Sahu, had an argument with the judge during the hearing of a bail plea. It was not clear which remark allegedly upset him to that degree. Police says an investigation is on.

The protesting lawyers first took his body into the court of the judge with whom he allegedly had an argument. Upon not finding him there, they entered the Chief Justice’s court and ransacked that too.

Police used lathicharge to disperse the protesters, who later sat on a dharna demanding action against the judge. Special Task Force of the police was deployed to protect the court.

The protesters set fire to the chamber of the advocate who’d appeared against Anurag Sahu, at the State Bar Council, close to the court building.

Asked if the Anurag Sahu had left behind a suicide note, the SP said the matter will be probed.

In the evening, the State Bar Council of Madhya Pradesh appealed to lawyers to stay away from court proceedings across the state on Saturday in protest.

Council vice-chairman RK Singh Saini claimed in a statement that Anurag Sahu was facing harassment from some officers and advocates. The council will also write to Chief Minister Shivraj Singh Chouhan demanding action against the policemen who “mercilessly lathi-charged the advocates”, he said.