Kharge walks with Rahul during Yatra in home state Karnataka 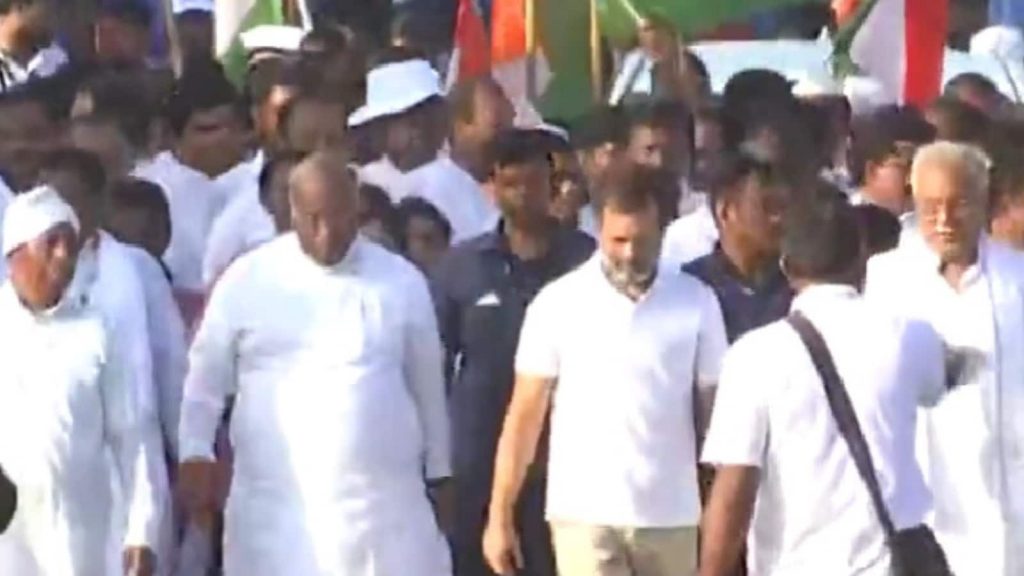 Senior Congress leader Mallikarjun Kharge, who is reportedly being backed by the Gandhi family in the party presidential poll race against Thiruvananthapuram MP Shashi Tharoor, on Saturday was seen walking with Rahul Gandhi during the Bharat Jodo Yatra in Karnataka. It is for the first time that Kharge participated in the Bharat Jodo Yatra which is in his home state for more than 10 days.

Earlier PTI had reported that 80-year-old Kharge stayed away from the Bharat Jodo Yatra in his home state of Karnataka alongside Sonia Gandhi and Rahul Gandhi as the party is keen on underlining the impartiality in the presidential polls.

Earlier, Congress presidential candidate Shashi Tharoor debunked suggestions that his rival Mallikarjun Kharge had been propped up by the Nehru-Gandhi family, which would continue to hold the reins of the party irrespective of who got elected to the top post.

This is the 38th day of the 3,570 km long Bharat Jodo Yatra, which started from Kanyakumari in Tamil Nadu and will culminate in Jammu and Kashmir. The padyatra, which has covered 600 km across the southern states of Tamil Nadu, Kerala and Karnataka, will traverse Karnataka till October 20 before moving into Telangana.

The polling for the Congress presidential election will be held on October 17. The counting of votes will be taken up on October 19 and the results will be declared the same day. More than 9,000 Pradesh Congress Committee (PCC) delegates will vote in the poll.

Rahul Gandhi had earlier dismissed claims that the next Congress president would be “remote-controlled” by his family, saying both the contenders — Kharge and Tharoor — are people of stature and understanding and to make such a suggestion was insulting for them.