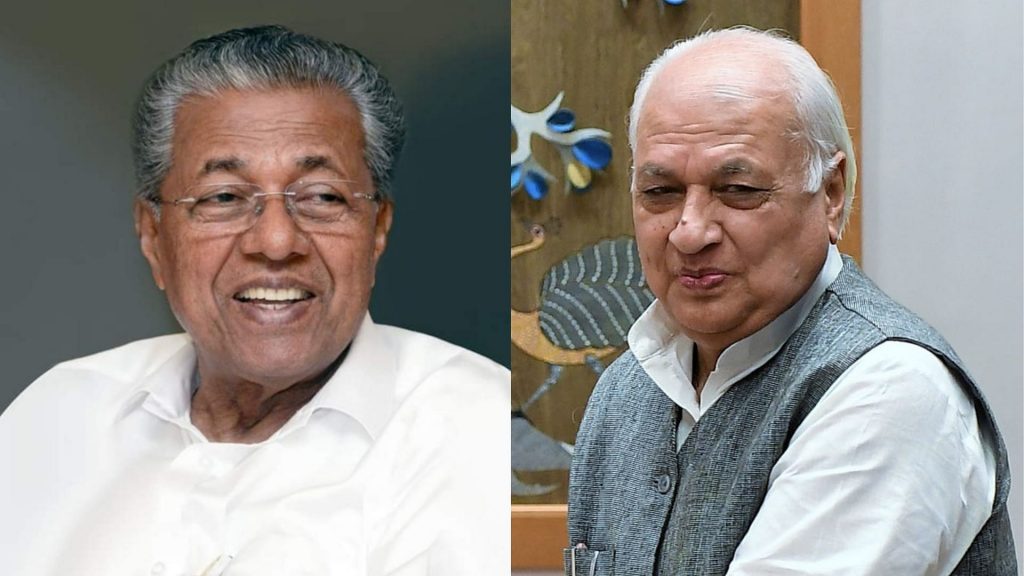 In an interaction with presspersons in New Delhi, Khan said he had not interfered in governance.  “But now when I see all the smuggling activities are patronized by the Chief Minister and persons close to him are involved in smuggling activities, I have the ground to interfere.” The Governor is obviously using the recently-published memoirs of gold case accused Swapna Suresh to hit back at Pinarayi.

Upping the ante against the Government, Khan lashed out at Kerala Finance minister K N Balagopal saying that he had made things difficult for Keralites residing in other States by “stoking the fire of regionalism and provincialism”. The Minister, Khan added, had challenged national unity by insinuating that “people from UP could not understand Kerala systems.’

The Governor’s growing outbursts against the Government have only reinforced the suspicions that he is acting as a political agent of the Union Government and the RSS-BJP combine. If he thinks that such a strategy would fetch rich political dividends, he is mistaken. If anything, such tactics would only boomerang, exposing the Governor to further public ridicule. And the stratagem would fail dismally as both the Chief Minister, CPI(M) state secretary M V Govindan have made it  clear that the Government would not be cowed down by Khan’s intimidatory tactics. Khan’s remarks evoked a sharp retort from Govindan. The Governor was relying solely on the lies and canards being floated by a discredited economic offender. Such statements should be rejected with the contempt they deserved, added Govindan in a strongly-worded riposte. CPI state secretary Kanam Rajendran also identified himself with the opinion voiced by his CPI(M) counterpart.

Meanwhile, the Kerala University Senate, dominated by the LDF, has frustrated the Governor’s attempts to have his nominee included in the search-cum-selection committee to choose a Vice-Chancellor.  The Senate meeting held the other day, decided to elect a person to the committee only if the Governor as Chancellor withdrew his earlier notification constituting a two-member VC selection committee.  The Senate had, on August 20, passed a resolution asking the Governor to disband the committee constituted by him “illegally”. While 50 members supported the resolution, seven UDF members opposed it. Now that the Senate has taken a tough stand in the matter, the ball is back in the Governor’s court. It remains to be seen whether he would take any swift retaliatory action.

Significantly, the resolution contended that the notification issued by the Governor was in violation of the provisions of the Kerala University Act and regulations of the University Grants Commission (UGC).  According to Syndicate member KH Babujan, the notification violated Section10(1) of the Kerala University Act, 1974, which  says that the search panel should have three members. There was no provision whatsoever to constitute a committee with two members – which the Governor did – and then add the senate nominee. If the senate elected a person to the search committee based on the Governor’s notification, it would attract legal action, Babujan pointed out.

It may be mentioned that the Senate had, in August, decided to request the Governor , who is Chancellor of the University, to withdraw the notification. But he refused to do so and convened a meeting on October 11 for electing a member to the search committee. However, with majority of the Senate members abstaining, no business could be transacted, prompting the Chancellor to withdraw 15 of the 17 nominated Senate members.

All this shows clearly that the Governor’s action is littered with mistake after mistake. For instance, the Governor said it was wrong on his part to clear the reappointment of GopinathRaveendran as Kannur University VC. If he felt that it was illegal, he should have put his foot down and refused to clear his name. The Chancellor did not do so. Later, the High Court okayed the decision to reappoint Raveendran as Kannur Varsity VC. Then, the Governor woke up to blame the CM for ‘pressuring’ him into clearing Raveendran’s name!

The Governor has erred again by constituting a two-member search committee to select a VC. That is illegal as the university law says the committee should have three-members instead of two. The VCs have also argued that the Chancellor was only a statutory officer who could not adjudicate the legality o9r otherwise of  their appointments.  He is not legally competent to take a decision on whether the appointment of a VC was void or not.

In another significant development, the CPI(M)has started exploring the possibility of divesting Arif Mohammed Khan of the chancellorship of the universities in the State.  The CPI(M) state secretariat has decided to have a close look at the legal and practical aspects of the move.  The two-day state committee which is meeting in Thiruvananthapuram on Saturday is likely to take a final decision. The plan is to first bring in an ordinance removing Khan as Chancellor. If the Governor refuses to sign it, the Government intends to convene a special session of the Assembly to pass a legislation to  this effect.

The Congress, on the other hand, has become a laughing stock by failing to take a clear stand on the issue.  Reports have it that the newly-elected Congress president Mallikarjun Kharge is unhappy with the stand of the Kerala leadership which has backed the Governor in the standoff with the State Government.  According to CPI(M) Politburo member MA Baby, Kharge expressed his displeasure, in his meeting with CPI(M) general secretary Sitaram Yechury early this week, at the manner in which Khan is trying to destabilize the LDF Government. Senior Congress leaders in the State K Muralidharan and PJ Kurien are also sharply critical of the Governor’s recent actions.  This shows the sharp division in the Congress over the sensitive political issue. (IPA Service)

Owners Will Face Legal Action For The Defiance Of Railway Laws By Their Cattle
Posting....