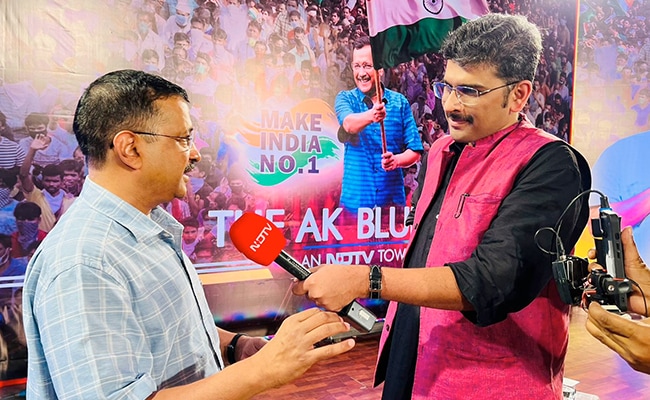 Arvind Kejriwal derided Rahul Gandhi, slammed the BJP and said he is skilled in “building schools and hospitals rather than political alliances” in a wide-ranging interview this evening.

At a special NDTV townhall, Kejriwal responded to the Congress charge that his Aam Aadmi Party (AAP) “claims to fight the BJP” but ends up weakening the Congress in every state.

The Congress recently repeated the accusation for Gujarat, where Kejriwal has urged voters to pick AAP instead of “wasting votes” on the Congress in approaching elections.

“Frankly, you tell me… Do you need me to weaken the Congress? Isn’t Rahul Gandhi sufficient? Am I needed,” the Delhi Chief Minister quipped, drawing laughter from his audience.

On Rahul Gandhi’s “Bharat Jodo Yatra” or 3,500 km foot march, Kejriwal said: “Good, let them do it, everyone should do something good. I wish them luck.”

Targeting the ruling BJP amid investigations launched against many AAP leaders, including his deputy Manish Sisodia, Kejriwal said: “Everyday, we hear MLAs are bought and governments fall. 285 MLAs have been bought across the country and Rs 7-8,000 crore has been spent on buying of MLAs. That is all they are doing. If our money is going into this, then how will the nation progress?”

The AAP chief was asked about alliances, the opposition attempts to unitedly take on the BJP in 2024, and whether he believed in “Ekla Chalo Re (Go it alone)”.

“I don’t understand alliances and seat adjustments. Getting politicians from different parties won’t take the nation forward. 130 crore Indians need to come together,” he replied.

“I’m not against anyone. But this jod-tod (alliance) politics is something I don’t understand. You want a better school or better roads or better hospital made, call me, I’m an IIT engineer, I can fix things. But all this alliance, seat adjustment stuff, I don’t understand,” Kejriwal remarked.