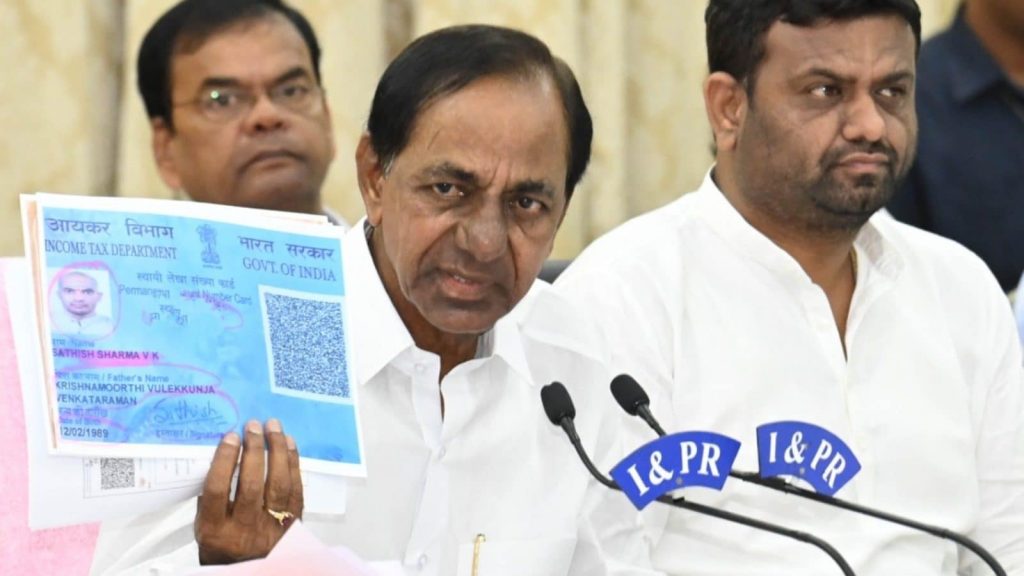 Telangana Rashtra Samithi (TRS) supremo, Telangana Chief Minister K Chandrasekhar Rao has appealed to all the constitutional institutions in the country to help ‘save democracy’ from the hands of the BJP which have been ruling the country for the past eight-half years.

He alleged that the BJP’s main motto is to dethrone the non-BJP ruled state governments in the country.

Addressing a press conference at the Pragathi Bhavan in Hyderabad after high voltage polling in Munugode Assembly constituency, KCR said that he has sent videos spanning three hours which contains evidence where middlemen were sent by the BJP in a bid to lure four TRS MLAs with Rs.100 crore, civil contracts and plum posts to make get them to jump ship and shift loyalties to the BJP.

The TRS chief claimed that he has now sent that video to the Chief Justice of India (CJI), judges of Supreme Court and High courts, investigation agencies such as Enforcement Directorate, Central Vigilance Commission, CBI, DGPs of all states and key leaders in the various political parties across the country. He also said they submitted the three-hour-video which contains the discussion between the middlemen and the TRS MLAs to the High Court of Telangana.

He urged the judiciary and all constitutional institutions in the country to go through the video and take action against the actual culprits behind the alleged horse-trading.

While releasing the sensational video in the presence of several media persons, K Chandrasekhar Rao said the accused claimed that they dethroned governments in eight states and they are in the process of pulling down the state governments in Rajasthan, Delhi, Telangana and Andhra Pradesh.

The chief minister also showed the photograph of Tushar, who unsuccessfully contested as NDA candidate against Congress leader Rahul Gandhi from Wayanad parliament constituency in the last general elections, with Union Home Minister Amit Shah. He said that in a telephonic conversation with Tushar, the middlemen has informed him that they spoke to BL Santosh and Amit Shah and assured that payments will be done without fail while luring the four MLAs.

K Chandrasekhar Rao also said that the accused middlemen allegedly used the Home Minister’s name at least 20 times while trying to fix a deal with the MLAs.

“Is this politics? Is this democracy? May be other states (MLAs) have sold out, as Telangana is a land with political and democratic conscious we caught the gang of three and the issue came to light. Country has been suffering with troubled situations. The murder of democracy has been taken place with impudicity. The BJP which came to power eight years have ruined all the sectors in the country. Conspiracies have been taking place to divide the people and pollute the way of life of Indian democracy in the country. We waited for a long time to take up the issue and go public with the truth after the Munugode by-poll”, he said.

The Chief Minister urged the Prime Minister Narendra Modi to put an end to this type of horse trading and the practice of dethroning the state governments in the country. The TRS chief cautioned Modi that the later will get bad name in the history if he encourages the such ill practices which accounts to murder of the democracy.