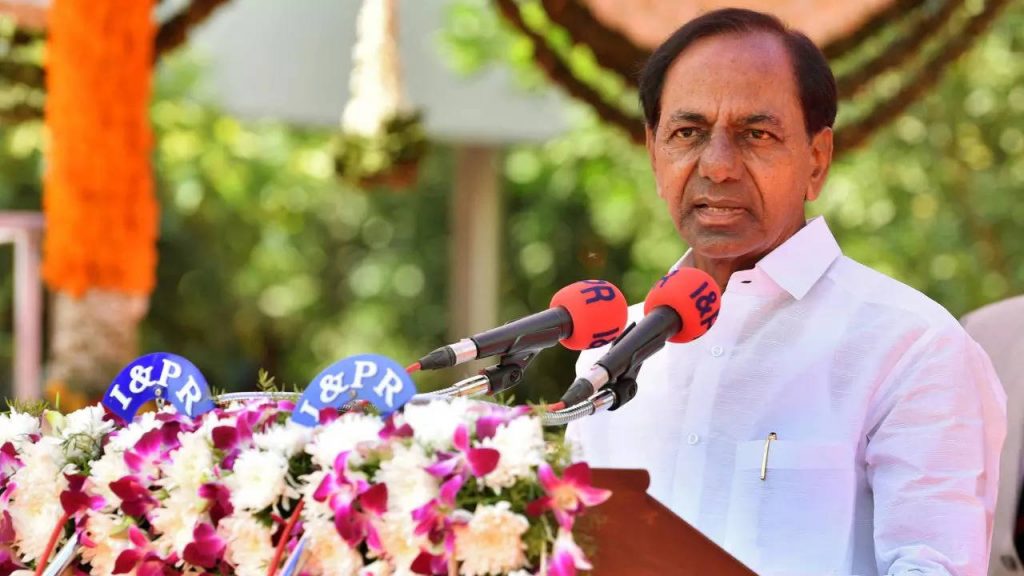 Now that ‘Operation Lotus’, Maharashtra edition, has successfully added the richest state in the realm to the 2024 BJP war-chest, ‘Operation Lotus’, Telangana edition, is ready for launch. And Telangana is in the neighbourhood, right next to Maharashtra. Therefore, the Bharatiya Janata Party is holding its national executive in Hyderabad with Prime Narendra Modi also planning to hold a “massive rally” in Secundrabad on Sunday.

The saffron party does not want to leave any stone unturned. But it is not easy. With Maharashtra, the split in the Shiv Sena helped. That was because there were three parties in the alliance and one of them was ideologically a variant! The BJP took advantage of this Achilles heel of the Maha Vikas Aghadi government.

A similar welcoming committee of rebels is not there in Telangana. The TRS government of K. Chandrashekar Rao is strictly a family enterprise and will not break up  like Shiv Sena. The only manner in which to gain a foothold would be by undermining the TRS government and the “KCR dynasty”, which is where Modi’s “Operation discredit dynasties” has been working assiduously.

This is also the biggest reason why KCR would gladly throw Modi into the Hussain Sagar Lake. For KCR, dynasty matters. And for Modi, and the Bharatiya Janata Party, undermining the KCR dynasty is key to the Telangana takeover though it’s not easy. KCR is the “founder-creator” of Telangana. The state owes its birth to K Chandrasekhar Rao. And he hasn’t been a bad ruler, either.

KCR is wary and edgy of Modi and his machinations. Below the belt comes naturally to both the men from Gujarat who rule the BJP and India, Narendra Modi and Amit Shah. Ask the natives of Lakshadweep, they are fighting a running and losing battle with the ‘Gujarat Boys’, and it is tough playing. Like KCR would also attest.

So it is that the Telangana Rashtra Samiti of K Chandrashekar Rao doesn’t like Prime Minister Narendra Modi, and ‘Bye Bye Modi’ sends the appropriate message, one that Narendra Modi will understand. Even if it is rude, it tells Modi in lingo he understands that “now that you’re here, ‘Bye Bye Modi’, see you somewhere, but not here.”

Not that the TRS is waiting with bated breath for Prime Minister Narendra Modi to fly into Hyderabad for the BJP’s national executive. Leave it to TRS workers and they’ll meet Modi halfway, just so as to look him in the eye and ask him straightway whether he wouldn’t mind giving this year’s BJP national executive a miss!

The BJP is expecting a similar response from KCR. It’s holding its national executive in Hyderabad with the catchphrase ‘Adios KCR’! And even if KCR doesn’t understand a word of Spanish, the message is ‘Gracias, please beat a retreat.’ Both the TRS, and the BJP, have been on a poster-and-banner spree to claim top spots in the streets of Hyderabad.

And TRS is winning with a comfortable head start. The BJP is complaining, but can’t do anything. All is fair in love and war and there is no love lost between the two. TRS workers have strung up the banner ‘Enough Modi, Spare Us Modi’ at a busy crossroads next to Parade Grounds in Secunderabad, which is where Prime Minister Narendra Modi will be holding a rally on Sunday, July 3.

That being said, embarrassments for Modi are taking their toll on the morale of BJP state leaders, and BJP workers. Just the other day, in a replay of what struck Uddhav Thackeray’s Shiv Sena, four BJP corporators jumped ship and swam across to the TRS destroyer.

All the four BJP defectors are from the December 2020 GHMC polls victors’ club, when the BJP took its tally in the GHMC from 4 to 48, bringing down the TRS tally from 99 to 56. The reverse swing now has left BJP in the doldrums, and the BJP leadership is worried more BJP corporators could slip the net and swim over to the TRS.

The BJP has been harbouring high hopes of unseating the TRS from power for months, especially after its good showing in the GHMC polls. This, after KCR had been on a ‘Unite Opposition Mission’ to unseat Narendra Modi come 2024. Towards achieving this goal, KCR had been hogging headlines meeting with Mamata Banerjee, Pinarayai Vijayan, MK Stalin, Arvind Kejriwal, HD Kumaraswamy, Sonia Gandhi, Sharad Pawar, and Uddhav Thackeray.

Recent developments in Maharashtra are a setback for KCR and the rest of the Opposition. The calibrated and orchestrated downfall of the Shiv Sena, with Uddhav Thackeray no longer master of all he surveys, doesn’t bode well for the united colours of the Opposition. But there is no give-up in the tireless KCR whose entire family is on the mission to show Modi the exit door.

For the BJP, with Maharashtra in the pocket, the next target for acquisition is Telangana, where all three parties–BJP, Congress and TRS–are in the fray. But the defections have led to a dip in the morale of BJP workers. The defections are a warning. It galls the BJP top brass that the corporators defected even after they were part of a meeting with Prime Minister Narendra Modi in the first week of June. Telangana goes to polls by 2023 end. (IPA Service)