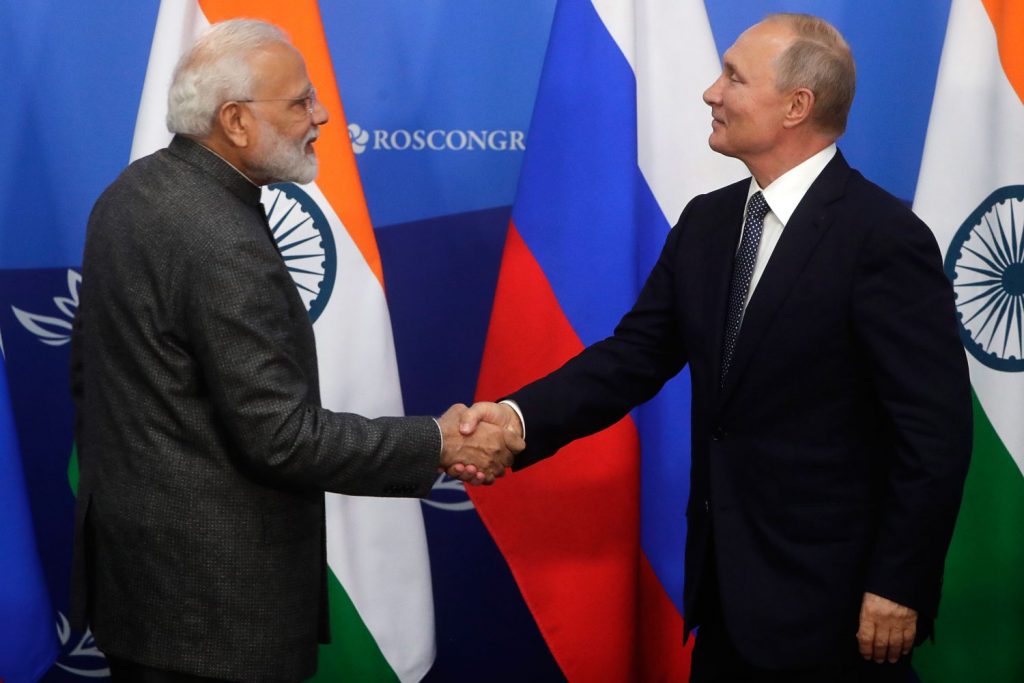 With the first name ‘Boris’, he should have been a friend of Russian President Vladimir Putin. But this ‘Boris’ would rather be addressed as ‘Johnson’ as he travels to India at the invitation of Prime Minister Narendra Modi. And, hopefully, the two will get along although Putin’s shadow will loom over Modi as Boris goes about doing to Modi what US President Joe Biden attempted and failed.

Modi, it is turning out, is a leech for remaining aloof. And as long as it is foreign relations, he can get away with the excuse that it’s got to do with “India’s national interests.” Which Indian will dispute that? No Indian political party will raise a finger. And talking of Modi, he seems to have convinced Johnson to start his India visit from Gujarat.

The last time a foreign head of state started from Gujarat, Covid-19 reared its head and the pandemic waged war on India, and cast Modi in the darkest of colours. Then it was President Donald Trump and Modi lost his head in the company of “Abki Baar, Trump Sarkar”. Boris Johnson shouldn’t fail to miss the symbolism. Calls for Johnson’s resignation are resonating back home in the UK.

Boris Johnson during his visit will try bringing up the Russian invasion of Ukraine, but will that cut ice with Modi? Will the Indian Prime Minister’s heart melt at the plight of the hapless Ukrainians when it does not beat for Indians who often find themselves in similar neglect under Modi’s reign?

The British Prime Minister may have some idea of the timing of his visit. According to Reuters, Johnson will try to leave his “domestic problems” in London when he sets out on his India trip with the ostensible reason to “strengthen links” between India and the UK.

The real reason will be to drum sense into India and Modi on the Ukraine crisis. Of course, it would be foolish to expect anything positive to come out of the Boris-Narendra dialogue as far as Ukraine goes. Modi will not yield to persistent pressure. If he bows to Boris, opinion in India will lynch and bury him in 2024.

Johnson, of course, will wish he could take back home something to show for his brilliance. The tousle-headed Prime Minister, whose marriage has been the only highlight of his #primeministership thus far, will leave his woes at home, when he boards the flight to India.

But calls for his resignation for breaking his own COVID-19 lockdown rules will shadow him to India. Who cannot remain Prime Minister is much more volatile in the UK than it can ever be in India with an Indian Prime Minister. Johnson said he would “set the record straight” on his Covod-19 misdemeanor. He has been on record that 10 Downing Street will follow all Covid-19 guidelines.

Johnson says he will use his trip to India to discuss with Modi the “strategic defence, diplomatic and economic partnership” the UK and India share. Top of the agenda will be a free trade pact, post Britain’s exit from Brexit. Such a trade deal would take Britain’s trade up to $36.5 billion by 2035.

Boris would consider an FTA with India a major trophy. But getting India to castigate and cast aspersions on Russia and Putin will be cherished more. The West would like it best if India stops engaging with Russia. Condemning Putin will bring to Modi lots of ‘xo xo’, which is American slang for “hugs and kisses.”

And the ‘xo xo’ will peak if India helps dig a hole to inter Putin in, bury him deep. India going slow on arms imports from Russia will be the icing on the cake. The S-400s are a particularly sore point with the Biden administration, which would rather India behave like a satellite.

As for Britain, the UK still thinks India and Indians are the White Man’s burden and therefore can be cajoled and coaxed to “listen to reason” for India’s own sake. Biden tried pushing Modi to stop buying more oil from Russia, but had no answer when questioned about European countries’ fetish for buying Russian oil.

Earlier, quite early in the Russian invasion of Ukraine, when tens of thousands of Indian students were still stuck in Ukraine, Anne-Marie Trevelyan, Britain’s trade minister, couldn’t stomach India’s refusal to toe Britain’s line on Russia. Johnson will try to undo that setback with zero chances of success.

There are other geo-political issues that the UK will find India agreeing to. Like, for example, Britain’s newfound return to the Indo-Pacific after opting to avoid the tensions and conflicts that are peculiar to the region, especially now when there is likelihood that China might try to do a Russia on Taiwan. The Quad wouldn’t mind a loose affiliation with the UK, especially India with China sitting on its head.

Johnson says India is a valued strategic partner, especially when “we face threats to our peace and prosperity from autocratic states”. India is expected to stick with the “democracies and friends.” The only problem is that while the UK and the US are “democracies”, Russia happens to be a “friend!” (IPA Service)