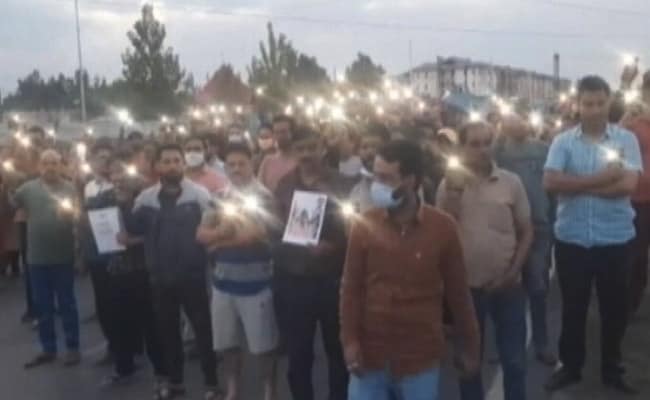 Massive protests were held in several parts of Jammu and Kashmir last night as Kashmiri Pandits demanded safety in the wake of the killing of a 36-year-old man from the community.

Members of the community left their transit camps, where they have been living since their exodus during the wave of militancy in 1990, blocked roads and raised slogans against the central government, saying it has failed them. Slogans were also raised against Prime Minister Narendra Modi and Union Home Minister Amit Shah.

In what appeared to be another targeted attack, terrorists barged into the Tehsildar’s office at Chadoora village in Budgam district yesterday and shot Rahul Bhat. He was rushed to a hospital where he succumbed to his injuries.

The 36-year-old had been working there for the past 10 years after his appointment under a special package to rehabilitate Kashmiri Pandits.

His body is being taken to Jammu for last rites.

Rahul Bhat is the third Kashmiri Pandit to be killed in the past six months. Two others have been injured.

Targeted killings in Kashmir started in October. The victims were mostly migrants who came in search of jobs and indigenous Kashmiri Pandits.

In October, seven civilians were killed in five days — among them a Kashmiri Pandit, a Sikh and two migrant Hindus.

Shortly after, many Kashmiri Pandit families fled their homes in Sheikhpora – home to the minority community.

Rahul Bhat’s killing has yet again brought to the fore the challenges to rehabilitating the Kashmiri Pandit community.

While the government has announced several schemes and made appeals to the members of the community to come back to the Valley, repeated attacks on Kashmiri Pandits raise the critical question of whether they will be safe if they return.