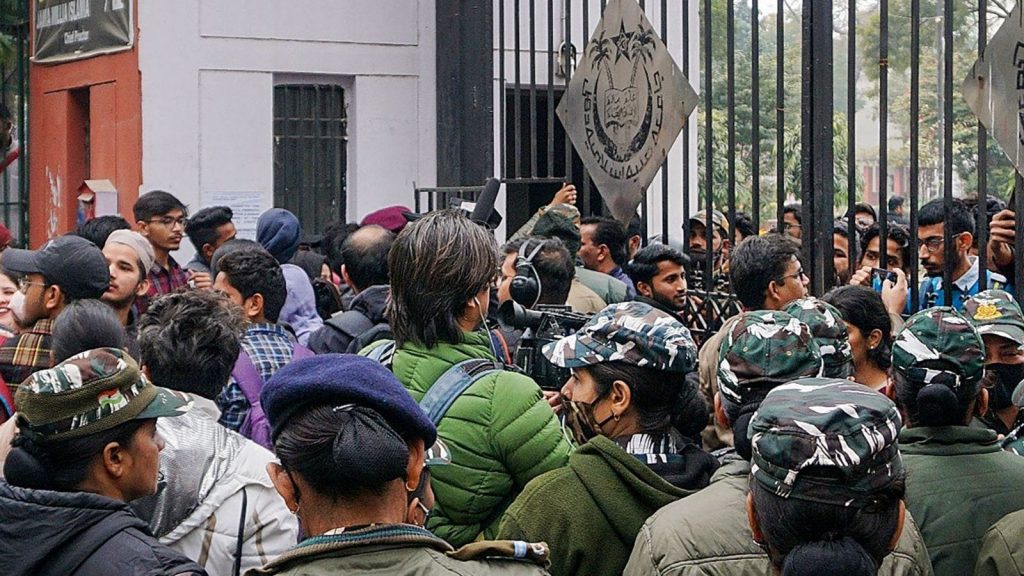 More than a dozen students, including members of a left-wing group, were detained by the police and classes were suspended at Delhi’s prestigious Jamia Millia Islamia university on Wednesday over a plan to screen the controversial BBC documentary on Prime Minister Narendra Modi this evening.

Student activists, waving banners and raising slogans against the crackdown, were seen being hauled away by the police.

Jamia Millia Islamia Vice Chancellor Najma Akhtar called a small student group with no following” and accused it of disturbing peace on the campus. “We do not want any disturbance on the campus. We desire to keep the peace and harmony in the university where students are studying and giving exams,” Akhtar told PTI. “A small group like Students’ Federation of India [SFI], which has no following, is holding protests. We do not approve of this kind of behaviour. Their aim is to disturb peace and harmony on the campus. At no cost I will allow this kind of behaviour under my watch,” she said.

The screening plan at Jamia came a day after a similar announcement was made by the students of Jawaharlal Nehru University (JNU), which did not go as planned with students alleging deliberate power cut by the varsity administration and stone pelting later.

With inputs from NDTV, News18

Top ISIS leader killed in Somalia raid by US military