Is There More To CM Nitish Attending Tejashwi’s Iftaar Party? 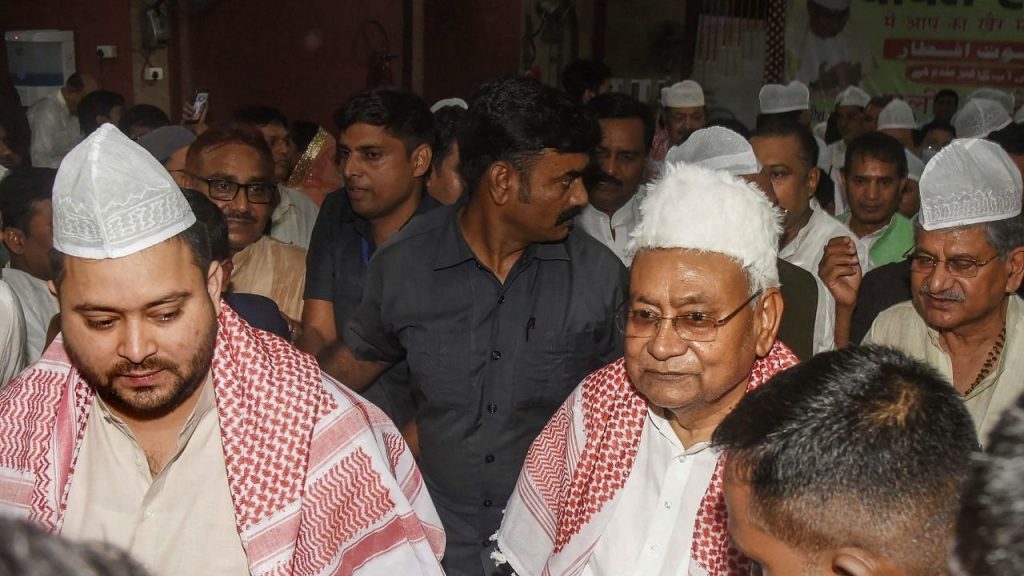 Bihar CM Nitish Kumar’s presence at an iftaar party hosted by RashtriyaJanata Dal (RJD) leader TejashwiYadav on 22 April, a day before Kumar moved out of his 1 Aney Marg house, has given rise to the speculation that both parties may be toying with the idea of coming together to form the government. However, Chief Minister Nitish Kumar rubbished the anxious grapevine stemming from his visit to veteran leader Lalu Prasad Yadav and wife Rabri Devi’s residence on iftaar. He said many people are invited to such iftaar parties. “What connection does it have with politics? We also hold an iftaar party and invite everyone to it,” he said. In the same line, BJP leader Sushil Kumar Modi denied any brewing difference with JD(U) when he said: “Rumours are being floated that the BJP wants to install its own CM and Nitish Kumar would be shifting to Delhi. Nothing could be further from the truth.” He further said: “The 2020 assembly mandate was for Nitish as CM and he will continue as CM till 2025.” An official press note released the same day clarified that the CM had moved to a bungalow at 7, Circular Road, as repair works were to be undertaken at 1 Aney Marg. However, political observers are still speculating since there’s little smoke without some actual fire.

Congress president Sonia Gandhi took an action against former union minister KV Thomas and expelled him from the Kerala Pradesh Congress Committee for violating party leadership’s directives. A five-member disciplinary committee headed by senior leader AK Antony recommended the removal of Thomas from all party positions and admonished him for participating in a seminar organised by CPIM as part of its Party Congress held in Kannur, earlier in April. However, Thomas was not removed from the AICC. The decision was taken at the committee meeting held on Tuesday. The committee dismissed Thomas’s request for a personal hearing. While, reacting to the development, Thomas said that he would always adhere to Congress and would remain a Congressman for life. Meanwhile, the Congress disciplinary committee on Tuesday also recommended the suspension of former Punjab chief Sunil Jakhar from the party for two years in view of the anti-party activities he engaged in. The committee, however, has left the final decision with party chief Sonia Gandhi. Jakhar has faced action for his remarks and criticism against the former chief minister Charanjit Singh Channi, whom Jhakar had termed “a liability for the party”, after the Congress lost to the Aam Aadmi Party in Punjab. In turn, Jakhar said those who still had a conscience would be punished. The Congress disciplinary committee had on April 11 given a showcause notice to Jakhar for alleged anti-party activities and sought a reply within a week. However, Jakhar chose not to reply to the panel. “Aaj, sarkalam honge unke jinmea bhi zameer baaki hai,” (Today, those with a conscience will be beheaded). (My apologies to Javed Akhtar Saheb), said Jakhar in a tweet.

Internal shake-up continues within the Congress party, which has now removed Haryana Congress chief KumariSelja, and instead appointed UdaiBhan, a four time MLA who is considered a loyalist of former state chief minister Bhupinder Singh Hooda. Hooda remains the Congress Legislature Party leader, and has now managed to install a faithful as the PCC chief, in effect giving himself with complete control of the state party. Meanwhile, Congress president Sonia Gandhi has accommodated G-23 leaders in groups formed to lead segment-wise debate on political, economic, organisational challenges, during the party’s Chintan Shivir to be held from May 13-15in Udaipur, Rajasthan. The group on agriculture will be headed by Bhupinder Singh Hooda, while GhulamNabi Azad will be in the political group. Anand Sharma and Manish Tewari have been included in the group on economy. Now, the big question is if they be would be associated with the G-23 or would represent the Congress mainstream?

The differences between Samajwadi Party (SP) president Akhilesh Yadav and his estranged uncle Shivpal Singh Yadav, who heads the Pragatisheel Samajwadi Party Lohia (PSPL), are growing wider by the day. Akhilesh Yadav, while interacting with reporters at a function in Mainpuri on Wednesday night, said: “If the BJP wants to take ‘Chacha’ (uncle), then they should not delay it.”Shivpal, on Thursday, responded by terming Akhilesh’s statement as irresponsible and childish. “I am one of the 111 MLAs of the Samajwadi Party who won in the recent assembly elections. If he (Akhilesh) wants to send me to the BJP, then he should throw me out of the party. The statement is irresponsible and childish. I will inform the media about my decision at an appropriate time,” he said. Last week, Shivpal Singh Yadav had visited SP leader Mohd Azam Khan, who is lodged in Sitapur jail. After the meeting, he came out with a strong statement when he said that the SP had done nothing to secure the release of Azam Khan. “If Netaji (Mulayam Singh) wanted he could have spoken to the Prime Minister or sat on dharna in protest,” he had said. Differences between the SP chief and Shivpal Singh Yadav, who successfully contested the recent Uttar Pradesh polls on a SP ticket, has been widening since the latter was not invited at a meeting of the newly elected party MLAs held towards the end of March. Shivpal Yadav felt slighted over the matter and has since been seen to be drifting closer towards the BJP. Speculations about his crossover to the BJP were triggered after he met CM Yogi Adityanath and later started following him and PM Narendra Modi on Twitter.

UP Pradesh Congress Committee chief Ajay Kumar Lallu resigned owning responsibility for the party’s dismal show in the recently concluded state Assembly elections. Now, the state unit will soon get a new Congress state chief. The Congress could win just two seats with a vote share of 2.33 per cent. The names of senior Congress leader Salman Khurshid, former UPCC president Nirmal Khatri, former Rajya Sabha MPs and senior leaders Pramod Tiwari and PL Punia are doing the rounds as possible contenders for the UPCC chief’s post. The Congress’s seat share has been dwindling in election after election. In 2012, Congress had won 15 seats. In 2017, the party stitched up an alliance with the Samajwadi Party but failed to cut much ice among the voters and its number of seats came down to seven under the saffron surge. In 2022, despite an aggressive campaign by AICC general secretary and UP in-charge Priyanka Gandhi Vadra, the party could win just two seats. (IPA Service)

Chief Justice Of India N V Ramana Has Got The Chance To Throw Out Sedition Law
Posting....