Iranian Protesters Deserve The Big Support Of The International Left 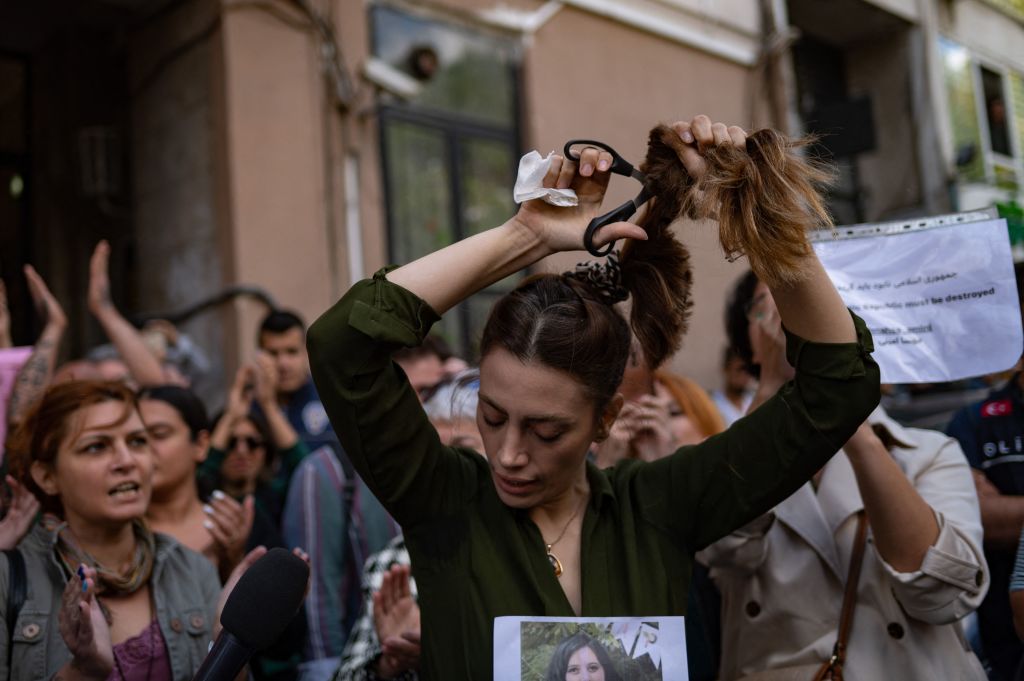 For more than a month now, anti-government protests have been spreading throughout Iranian society — in the streets, on university campuses, at high schools and middle schools, in front of coffee shops, on the metro and other public transit, and most recently among workers in the oil and petrochemical industries. While it is always prudent to approach the Western coverage of these events with suspicion, it’s clear that the Islamic Republic is facing its worst crisis of legitimacy since its inception forty-three years ago.

For decades, the Iranian state has responded to eruptions of public anger with brutal repression. In July 1999, security forces attacked university students protesting the closure of a pro-reform newspaper. The retaliation sparked a week of unrest across the country, which was met with a systematic campaign of arrests and killings. A decade later, in the aftermath of the 2009 presidential election, millions poured into the streets to contest the suspicious outcome. In response, the country’s military and security apparatus arrested thousands of protesters and activists, killing several others.

In that sense, today’s protests and the state’s response are a repetition of earlier dramas in Iranian political life. Still, there is something observably different this time around. It’s astonishing to witness a movement led by girls and young women bravely rising up against forty-three years of institutionalized gender repression. The international left should affirm its feminist and democratic message instead of ceding the public discourse to neoconservatives and liberal hawks who want to use the protests for their own purposes.

September 13, 2022, will forever mark a pivotal moment in the history of Iran. That evening, outside a train station in Tehran, Mahsa Zhina Amini, a twenty-two-year-old Kurdish woman visiting her family in the capital, was confronted by the so-called morality police — a religious force tasked with reprimanding, arresting, and detaining people who flout the country’s religious dress code. The morality police are widely disliked in Iran, even drawing criticism in 2010 from the conservative then-president Mahmoud Ahmadinejad.

Three days after the morality police approached her in Tehran, Mahsa died in a hospital under deeply suspicious circumstances. The women who had ridden along in the detention van with her would later tell her family that she was beaten while in custody.

In the days following Amini’s death, thousands of women took to the streets, symbolically burning their headscarves, cutting their hair, and chanting “Women, Life, Freedom,” “Death to the dictator,” and “Down with the oppressor, whether it’s the king or the supreme leader.” Photos and videos began to stream out of the country showing high schoolers and university students, predominantly women, joining the protests in their classrooms and on university campuses.

True to form, the Iranian government responded swiftly and brutally. Security forces were immediately deployed to major cities, where they violently attacked and killed protesters and arrested journalists, athletes, and lawyers alleged to be provoking unrest.

It’s not easy to reach friends and family inside Iran these days. With every new rumbling of protest, the regime shuts or slows down the internet to stall communications between people living in Iran and advocates living abroad. This breakdown of communication often creates an informational and epistemic vacuum, making it hard to know whose expertise to consult and which voices to trust and amplify.

Coverage of Iran in the US media is often filtered through the lens of US national security interests, promoting an image of a society mired in religious zealotry and backwardness. But in holding steadfast to this framework, American media has created an incomplete picture of Iran as a society totally controlled by irrational Islamists. In reality, Iranian society has undergone complex changes in the last four decades, witnessing the emergence of robust social movements led by women, students, and workers.

While the women of Iran have long struggled against patriarchal strictures, something about these protests is palpably different. There are at least two attributes that separate this most recent wave of protests from earlier iterations of popular unrest.

First, the protesters are very young. In video after video, we see Iran’s Gen Z, the so-called daheye-hashtadia, intrepidly taking to the streets to protest a regime armed with guns and bullets. Nika Shakarami, a protester whose body was found at the back of a courtyard a week after Amini’s death, was just sixteen years old. Sarina Esmailzadeh, who was killed when security forces beat her on the head with batons at a protest in Alborz province, was also sixteen. As countless other victims remain missing or unnamed, it’s likely that there are more teenagers among them.

These protests are being largely led by the girls and young women of Gen Z. “Gen Z does not necessarily follow a political ideology or theory,” a woman in Tehran tells me over Twitter, also requesting anonymity. “They are technologically savvy, highly educated, and are tired of the regime intruding into their lives. Like Zoomers elsewhere, they want to freely express themselves, wear whatever they want, get tattoos, dance, make music, and party. They don’t care about ideology or politics and therefore do not fear the regime in a way that perhaps our generation has. That is precisely why the regime cannot contain them.”

Second, unlike previous protest movements, these protesters have no fealty to any particular leader but are rather animated by an image and an ideal, captured in the tragic figure of Mahsa Zhina Amini. “Some have remarked that the movement doesn’t have a leader,” an Iranian writer tells me, also requesting anonymity, “but I would argue the leader is Zhina/Mahsa. And she is the perfect leader: a sinless, non-political young woman. She cannot be defamed, imprisoned, house arrested, or exiled.”

As the protests in Iran enter their second month and show no sign of subsiding, the international left must formulate a way to effectively express solidarity with those on the inside without inadvertently falling prey to the imperialist manoeuvring of Western actors and their allies. This task is hardly straightforward. Naturally, many on the Left are apprehensive about participating in a discourse traditionally overdetermined by state-sponsored propaganda. But it is imperative that we not remain silent in the face of observable oppression.

We can’t abandon Iranians to struggle in isolation, and we can’t cede the public debate to neoliberal and neoconservative actors whose interest in the fate of Iran and Iranians is entirely driven by their desire for global capitalist market expansion and US hegemony. We must vocally condemn the actions of the Islamic Republic while simultaneously rejecting the calls for more indiscriminate economic sanctions from the interventionist West. We must begin to lay the groundwork for a grassroots network of solidarity, through which we can engage and learn from the people inside about their vision of a free and democratic Iran.

The shape that such forms of outside support might concretely take is open for debate. One approach is to adopt the calls for boycotts of the state institutions of the Islamic Republic, as proposed by the group Faculty for Women, Life, Freedom. Whether or not we adopt this approach, socialists should at minimum publicly express support for the protests and protesters. We should not hesitate to embrace and echo the rallying cry coming out of Iran: Women. Life. Freedom. (IPA Service)

Effective Centre-State Dynamics A Must To Counter Terrorism
Posting....