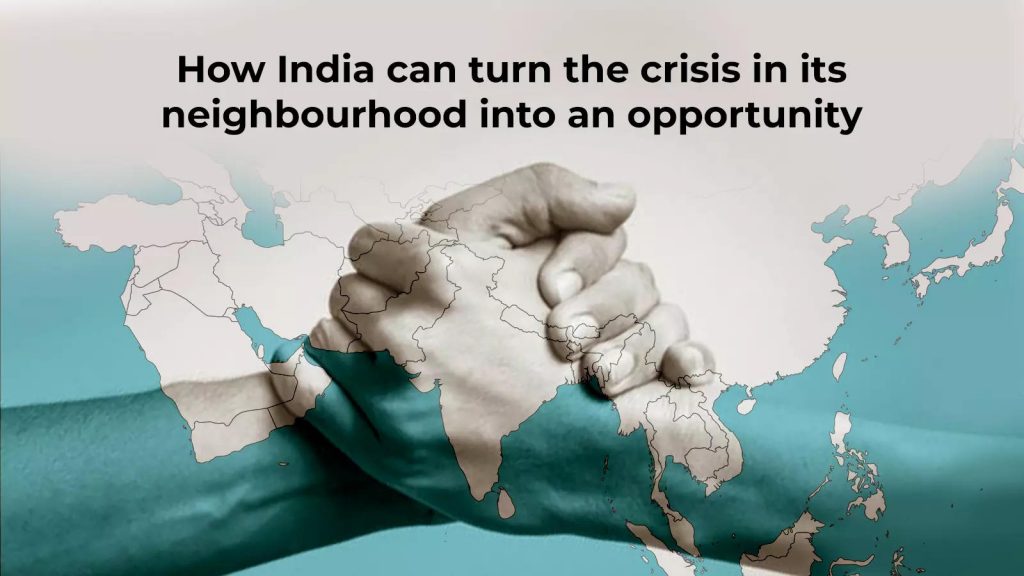 India is surrounded by economies that are moving towards bankruptcy and severe balance of payments crisis. Only Bangladesh like India is on a revival mode. But Indian economy is perhaps the fastest growing in the World. It is therefore pertinent to analyse what went wrong with these so called Himalayan economies. In this context it is also worthwhile to draw lessons from India and to some extent Bangladesh which have managed to weather the storm after Covid pandemic.

India in particular has ensured that its macro-economic fundamentals are strong and is resilient to such global shocks that arise from time to time. The calibrated and irreversible structural reforms it carried out since 1991 has helped a great deal.  Also right from independence, Indian economy though faced several impediments, has somehow managed to convert crisis into opportunity. Its policy of self-reliance right from independence has enabled it to lay strong economic foundation making its growth gradual but definite. The opening up of the economy in 1991 has given a fillip to its growth process enabling it to become a fifth largest economy with poverty decreasing substantially and social and economic indicators improving substantially. Since the launch of green revolution in the 1960s, India is among the top in food grains, milk fruits and vegetable production in the world. The economy has made big strides in industrial and infrastructure development as well. India is now leader in software development.  It cashed in on Covid pandemic as well to push digitization of the economy. But its neighbours have lagged far behind in the face of topsy-turvy and adhoc policies.

The Himalayas are the highest and most majestic mountain range in the world, as well as the natural boundary of the Tibetan Plateau and the Indian subcontinent, stretching continuously for 2,500 kilometers from west to east, between China (Tibet), India, Nepal, Bhutan, Pakistan and other countries. The mountain ranges do not belong to any single country, although Tibet, Nepal and Bhutan have sovereignty over most of the Himalayas, Pakistan and India occupy part of it. The main part of the Himalayas stands at the junction of China and Nepal, including its main peak Mt. Everest (8848m) – the highest peak in the world. Though a beautiful region, the economies somehow seemed to have faltered and remained backward barring India and China, two largest economies of the world. The skewed development strategy over the last several decades is the main cause of these nations remaining backward and have lately been pushed towards bankruptcy and balance of payment crisis.

Neighbouring Asian countries in the southern Himalayas from west to east are Afghanistan, Pakistan, India, Nepal, Bhutan, and Myanmar; while in the northern Himalayas, there’s only one county – China.

With Sri Lanka Included, the Himalayan countries barring India and China remained feudalistic and no attempt has been made to adopt inclusive growth model by monarchs or authoritative regimes resulting in these economies tottering especially in recent years with global economies witnessing serious upheavals. These economies were largely dependent on foreign aid for development which usually came with strings attached and were subjected to exploitation.  Lately Pakistan, Nepal and Sri Lanka in particular have tilted towards Chinese aid and finances and bail outs had resulted in arm twisting from China, which has shown no mercy in demanding its pound of flesh.

Strangely Pakistan, Sri Lanka and to some extent Myanmar and Nepal were doing reasonably well soon after independence in the Indian sub-continent. But lately for a decade or so they have been faltering. The Covid and Ukraine war made the situation worse with changing World order.  Some of the countries like landlocked Nepal and Bhutan and island republics of Sri Lanka and Maldives were largely dependent on tourism to drive their economies.  Tourism industry and civil aviation was one of the worst hit sectors during the two years of Covid pandemic. The Ukraine-Russia war has made things worse as it had resulted in steep hike in global commodity prices particularly oil and gas besides the disruption to logistics and civil aviation business.

The emphasis on self-reliance since independence laid a strong foundation and enabled the economy to make steady progress converting every challenge into an opportunity. But the countries around India had a developmental model that encouraged in promoting unwieldy army, ethnic strife, terrorism and living beyond its capacity. These economies were therefore pushed to the brink of collapse with severe debt burden, high inflation and balance of payments crisis.  Some of them like Pakistan Nepal and Sri Lanka are staring at defaulting in international payments.

When India opened up its economy in 1991, Nepal was exporting more than North Indian states put together, Pakistan, more than Western states, Bangladesh more than eastern states and Sri Lanka more than southern states. With economic reforms taking roots, Indian economy moved to a high growth path like fish taking to water due to sustained investments in infrastructure, education, health and so on while the neighbouring economies have steadily deteriorated because of the lack of holistic approach to the socio-politico-economic model resulting in dynastic politics, widespread corruption, lawlessness, exploitation by the Army, authoritarianism and terrorism. India still faced infrastructure deficit and needed more investments in education and healthcare but its growth has only been upwards unlike these economies which are in reverse gear.

One cannot be oblivious to the fact that socio-political development is critical to economic development and adequate investment was not made in these areas resulting in terrorism, violence, political and ethnic strife making these economies not stable for huge investments. Also these economies unlike India did not build food security by paying adequate attention to agriculture. This has made a large section of the population, especially rural, vulnerable. The first major achievement in India is the Green Revolution in the 1960s which ensured India need not have to go with a begging bowl for foodgrains. After the 1991 IMF structural adjustment loans, India has never witnessed a balance of payment crisis.

Sri Lanka and Nepal are recent cases of economic troubles, Pakistan, an IMF-addict whose 13th bailout plan has been put on hold by the IMF with other agencies such as the World Bank and the Asian Development Bank showing a similar pattern. Pakistan’s foreign exchange reserves are at the lowest of the low and won’t last beyond June. Its trade deficit stood at $39 billion, thanks to the populist policies of now-gone Imran Khan. So bad is the situation that  one of the first priorities of the new PM, Shehbaz Sharif, was to seek Saudi help over and above the loan of $4.2 billion that the Saudis have extended.

Another neighbour, Maldives, is also not in a safe position as among all the South Asian economies, oil imports constitute the highest part of its GDP with 20 per cent of its tourists coming from war-hit Russia and Ukraine.

Nepal has symptoms of a brewing economic crisis. Nepal’s foreign exchange reserves have fallen by 18 per cent in mid-March since last July, enough to last for just six months of imports. Inflation in the country at 7 per cent is the highest in the last 67 months with crop loss due to last floods adding to its food-fuel inflation already exacerbated by the Ukraine-Russia.

Even before the pandemic, South Asia was already showing signs of weakening economies with the World Bank pointing this out in its 2019 report. Since 2014, South Asia enjoyed the tag of ‘world’s fastest growing region’ unchallenged until it lost to East Asia and the Pacific in 2019. While Sri Lanka and Nepal have COVID-19 as an excuse as both are tourism-dependent economy with a heavy reliance on remittances, Pakistan’s economy was in shambles even before the pandemic. According to the latest World Bank report on the region, South Asia is suffering from the twin-blow of COVID-19 pandemic and the Russia-Ukraine war. But that’s true only for the short and medium term.

Structural reforms are not easy to implement. In India too when it was started in 1991, there were resistance from political class and vested groups of businessmen known as Bombay Club. Structural reforms and digitisation results in steep reduction in corruption and crony capitalism. Take for example Pakistan the elite comprising 1000 families, mostly feudal in outlook, control entire Pakistan. If Father is in the army, one son is in PML and another in PPP and perhaps the third in Imran Khan’s PTI. So whosoever is in power, the family is secure. Reforms meant, power going into the hands of the people. Hence it will be difficult to carry out structural reforms. In Nepal too real power is with a handful of families after the Monarchy ceased. Bhutan is still a kingdom with none else having any real power. In Myanmar, it is Military Junta that has the power. In Afghanistan, the situation is slightly different with Talibans and warlords controlling the country.

Apart from structural reforms, these nations will have to invest heavily on education, health, skilling and other social-economic development like infant mortality and nutrition. That requires enlightened leadership as in India, which has been fortunate in having such leadership since independence. Some mistakes might have been made as the nation progressed but course corrections too have been taken as the country had remained a vibrant democracy. If these neighbouring economies have to come out of the woods, it needed to adopt true democratic values and carry out massive structural reforms with emphasis on education and health. (IPA Service)

In Power Battle In Maharashtra, Ideology And Dynasty Are In Collision
Posting....