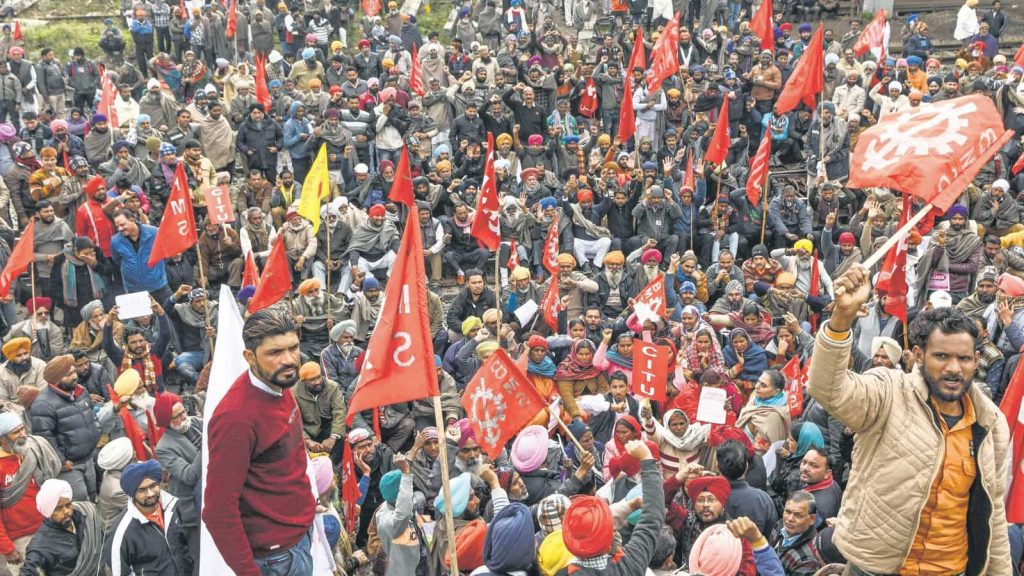 The situation worldwide and in India for the working class and the common people in general has further deteriorated on all counts since the last CPI  party congress held at Kollam, Kerala. In 2018. The 24th congress of the CPI is currently on in Vijayawada till October 18.

There is world-wide shift to the Right. This trend has further strengthened with International Finance Capital imposing its hegemony globally. IMF-WB and WTO are at the service of International Finance Capital in pushing this agenda. The economic strategy is to capture natural resources, create and capture markets, maximize profits and push debt based economy all over the world. It wishes to divide, disintegrate and suppress any opposition.

There is stagnation in industrial production rather it is showing negative job growth all over. The Capitalist world is visibly keen to shift its economic burden on the developing world through intimidation, wars and conflicts. The crisis created by US NATO push for war in Europe and the politics of sanctions coming heavily on the working people the world over with rising cost of living. This in turn is resulting in fast growth in unemployment rate. In the name of austerity measures there are attacks on pensions, public health, education, civic services. The governments are withdrawing these facilities from the common people.

In our country the railway passes are withdrawn from several categories, the children from one year onwards will be charged full ticket and GST imposed on cancellation of rail tickets, GST also imposed on food items, the benefits to the needy people, farmers and the socially necessary activities will no more enjoy free/subsidy on electricity use if the proposed Electricity Amendment Bill is passed, the common land in rural India for use of vulnerable, deprived sections is also being pushed into commercial activities, those taking shelter in such lands are being evicted and deprived of use of natural resources of forest etc.

The military budgets are rising, the armament lobby and the arms industries flourishing, whereas there is gaping inequalities in living standards.

The fascistic trends are growing in various parts of the world with tacit support of ruling classes. Conflicts at all levels, within the country, between the countries and regions are being heightened.

In our country, the core democratic values, inherent in our composite culture are under severe threat. The unity based on pluralism of faith, religions, languages and ways of living face the threat of forced homogenisation. Freedom of expression and dissent are cruelly crushed. The students, writers, artists, theatrepersons, journalists, lawyers, social activists who stand for justice to vulnerable sections, independent thinkers and ideologues all are under attack. The politics of silencing opposition is aggressively being pursued undermining the basic principles enshrined in our Constitution.

Conditions are fast deteriorating. The government is serving the corporate interest, within the country and also those of the World Finance capital. It is coupled with worst forms of majoritarianism and communalism. The fascistic tendencies are getting exposed with everyday incidents and utterings of those who matter in power hierarchy. On the one hand the country’s economy is being handed over to the corporates and other capitalist classes, and on the other side there is tacit support to communal outfits in spreading hatred and communal poison to divide the society distracting people’s attentions from the nagging issues of livelihood, education, health, shelter, drinking water, sanitation and social security etc. The government, rabidly reactionary in its outlook in almost all spheres of economic, social and cultural life, has been taking steps in the direction of doing away with the concept of ‘Welfare State’ and going ahead with IMF-World Bank thesis of abdication of state responsibility for providing basic needs to its people. The workers are worst victims of these policies.

After negative effects of demonetization and GST, there are deterrents emerging in job market, home based and units at small scale as well as on retail trade. The unplanned lockdown and mismanagement during Covid Pandemic have further created havoc in the lives of working class.

The starvation deaths are taking place. The government fails to subsidise poor people, denies loan waiver to farmers but it does not fail in writing off huge loans of the corporate houses (NPA). In last eight years more than 13 lakh crore have been written off. Even today the NPAs are about 16 lakhs crores. On the other hand fund allocations of MGNREGA were reduced in the annual budgets. Outreach also has been reduced.

There is desperation among the poor masses, the bread earners for the family. The latest report of National Crime Bureau mentions that the suicides of daily wage earners has reached almost 25 percent and 6.3 crore people are pushed below poverty line every year in our country due to out of pocket expenditure on health. India at present ranks 132 among 188 countries in human development index. In hunger index we rank 100among 119 nations. TB cases are 2.2 million in India out of 9.6 million cases the world over. We are among 14 countries including Sub- Sahara in which maximum death cases due to malaria occur.

In contrast to this the wealth of billionaires is estimated to have risen by an average 13 percent in last about 12 years while it is six times faster than wages of ordinary workers. In 20 years 500 of world’s richest people will hand over 2.4 trillion dollars to their heirs which is a sum larger than India’s GDP.

The employment Scenario is also very deploring. According to labour bureau in India 25 per cent of population is between19-29 years of age. They will experience unemployment rate of 34 per cent in2022. In Indian conditions it is huge number.

The trade unions have been consistent in their opposition and resistance to the anti worker, anti-farmer, anti people and anti-national policies of RSS-BJP government. They are now facing severe challenge as the labour laws have been changed and there is codification of labour laws in four codes by bundling 29 laws. The whole exercise had been managed without any consultations, necessary procedures and was cleared in Parliament when whole opposition had walked out to register their refusal to it. The farm laws were also pushed in Rajya Sabha without division of votes demanded by the opposition.

The government is forcing the codification to make four Labour codes applicable, which would cripple the unions and make hire and fire as norm, thwarting collective bargaining, snatching the right to strike, making fixed term employment as norm, making regular jobs impossible, among many other handicaps. These codes are exclusive in their design.

The government at the Centre does not believe in any dialogues with unions, does not honour bipartite or tripartite mechanisms, considers labour laws and trade unions as hindrance in growth and development. Instead they want “Ease of Business” curtailing workers’ rights. The claimed aim is simplification of laws, but the motive is to make it punitive for workforce and its unions, with no accountability towards the people who do the value addition and produce wealth, provide services. Through these codification of labour laws even the existing established social security schemes are under attack.

The unionists need to recognise that the demand of time is to strengthen the workers-peasants unity to put up vigorous struggle against tyrant regime at Centre which has not only failed the nation but is also letting loose the vicious divisive agenda.

We visualize very bad days ahead for the working masses at all levels with extreme job loss, wage cuts, growing unemployment rate, health hazards on rise at work places as occupational safety is victim of the government policies, the existing social security schemes are being weakened and are designed to be exclusive to damage the future prospects for workers and above all the right to unionisation, collective bargaining, to agitate including strike actions are under attack.

The trade unions which symbolize collectivism, democracy and togetherness of workers of all castes, communities, and religious faiths fighting for their rights of employment, job security, rights at work place and social security, have to come forward to push the socioeconomic agenda with the common man in the forefront and stand with those who are threatened because they question government policies.

AITUC will have to play its due role in the united movements of trade unions as well as the solidarity actions in favour of farmers, students, teachers, intelligential, writers, artists, journalists, and social activists etc.

To play that vital role in the circumstances we are placed, we need to strengthen our unions, expand to new areas, impart trade union education, raise the cautiousness of leaders and activists at all levels. Special efforts are needed to bring in young cadres in such training programmes. (IPA Service)

** The writer is the general secretary of the AITUC.

Rising US$ Could Be Bad News For Import Happy Indian Economy
Posting....