Indian ‘RuPay’ And Russian ‘MIR’ Look For New Opportunities Together 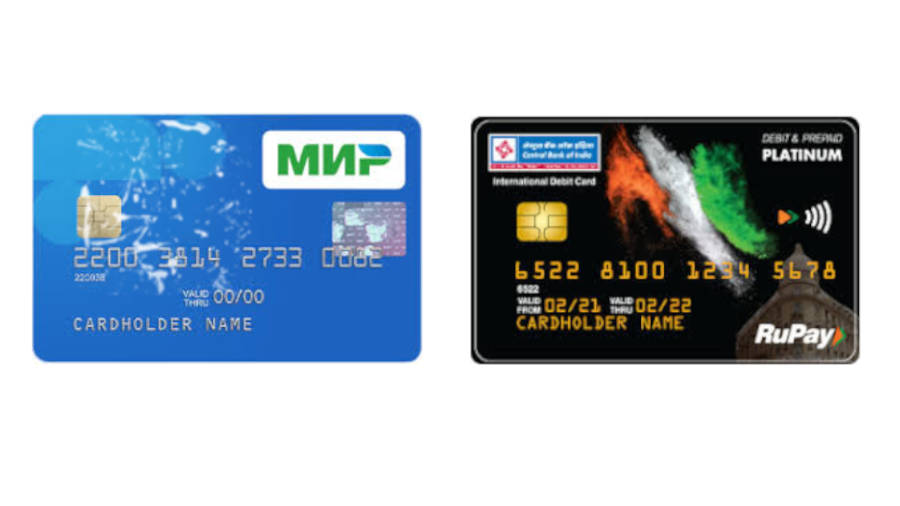 It is good to know that Russia and India are in an advanced stage of discussion on accepting each other’s debit and credit cards. Should the two countries agree, Indian ATMs (automated teller machines) will soon accept Russian MIR cards. And, Indian RuPay cards will be accepted in Russia. Further, the two countries are considering the mutual implementation of interbank transfer services — India’s Unified Payments Interface (UPI) and SPFS, the Russian version of SWIFT. India’s acceptance of MIR cards will provide a big boost to the five-year-old Russian electronic fund transfer system at a time when the country is facing wide-ranging financial sanctions from western countries and Japan.

Until now, MIR is accepted in 11 countries, comprising mostly central Asian republics (members of the former USSR). The recent partners include Turkey, Venezuela and Cuba. Iran may also recognise MIR. Russian banks have been banned from the SWIFT system globally as a result of the western and Japanese financial sanctions on Russia. MIR may be introduced in the near future in many countries which Russians often choose to visit for recreation. More than 15 countries have already expressed their willingness to accept MIR, including such popular tourist destinations as Egypt, the UAE and Thailand. India’s Goa is also very popular among Russian tourists.

India has been slow in marketing RuPay in other countries. Only four countries — the United Arab Emirates, Bhutan, Singapore and Nepal — use India’s 10-year-old RuPay card system. Introduction of RuPay cards in Russia will sharply enhance India’s financial connectivity in a world dominated by American cards such as Best Buy, Apple Card, Mastercard, Visa, Chase Sapphire Preferred and Chase Freedom Unlimited. Globally, the most popular credit card company is Chase. Visa has a strong  credit card network, with 353 million cards in circulation as against Mastercard’s 319 million. The Reserve Bank of India’s monthly bulletin for July, last, said there were 76 million credit cards in circulation in the country in May, compared with 923 million debit cards. And, the next month onward millions will be able to buy whatever they’ve set their hearts on and pay through RuPay linked to the Unified Payments Interface (UPI). As of April 1, this year, the number of MIR-compliant cards in circulation exceeded 125 million.

Further, India and Russia are considering the mutual implementation of interbank transfer services — UPI and SPFS. SWIFT stands for the Society for Worldwide Interbank Financial Telecommunications. SWIFT is a member-owned cooperative that provides safe and secure financial transactions for its members. The System for Transfer of Financial Messages (SPFS) developed by the Central Bank of Russia is a counter measure of the SWIFT system. About 70 foreign financial organisations from 12 countries have already joined Russia’s domestic alternative to the SWIFT financial messaging system. Russia is trying to help its financial sector adapt to unprecedented Western sanctions followed by removal from SWIFT.

However, the Russian system lacks the easy international connectivity and operates only during weekday working hours, while SWIFT operates round-the-year, 24 hours a day. SPFS messages also have size limits that make it difficult to handle more complex transactions. Russia has been preparing for a SWIFT ban since 2014 after the invasion of Crimea. In April 2014, a number of Russian banks were blacklisted by the US. Both Visa and MasterCard suspended the targeted banks’ services and blocked them from using their payment systems. The very next month (May) the Russian government passed a new law introducing the National Payment Card System, later known as MIR. India has been considering the use of rupee-ruble denominated payments using Russia’s messaging system SPFS to pay for arms, oil, fertiliser and other imports from the sanctions-hit country. The prospect of reciprocal use of RuPay and MIR will hopefully lead to higher levels of trade and tourism between the two countries.

Russia is also trying to rope in all the member countries of the Shanghai Cooperation Organisation (SCO) to join its SPFS. According to the country’s Economic Development Minister Maxim Reshetnikov, Russia wants to boost the volume of settlements in national currencies. “In order to ensure uninterrupted cooperation between our banks, we suggest that members of the organisation join the Russian financial messaging system,” Reshetnikov recently said in his video address to participants at the SCO forum in Uzbekistan.

He said the SCO countries need to continue to promote full compatibility of national payment systems and boost the volume of mutual settlements in national currencies. “We already see positive results, for example, a quarter of the trade turnover between Russia and China is settled in Rubles and Yuan,” Reshetnikov said. China, India, Kazakhstan, Kyrgyzstan, Russia, Tajikistan, Pakistan and Uzbekistan are SCO’s member states while its partners and associates include Afghanistan, Belarus, Iran, Mongolia, Armenia, Azerbaijan, Cambodia, Nepal, Turkey and Sri Lanka. The organisation’s work focuses mainly on security issues, but it also deals with regional development tasks. Russia has been actively promoting its SPFS ever since it was cut off from SWIFT.

On India’s part, RuPay cards need to be marketed more aggressively in countries having a good Indian presence and those preferred by Indian students, tourists and trading communities. Despite the Covid pandemic, more than seven million Indian nationals departed on outbound travels from the country in 2020. According to the UN World Tourism Organisation (WTO), this number is dramatically set to increase to 50 million in the current year. In the first three months of 2022, over 133,000 students left India for academic pursuits. In 2020, nearly 260,000 Indian students studied abroad. The number was 444,553, last year.

The size of the Indian Community in the Russian Federation is estimated at only around 14,000. According to India’s ministry of external affairs, there are 32 million NRIs and OCIs residing outside India and overseas Indians comprise the world’s largest overseas diaspora. Every year 2.5 million Indians migrate overseas, which is the highest annual number of migrants in the world. In 2021-22, India’s total inward remittances stood at US$85.6 billion, the largest recorded by any country. Under such a scenario, India should seriously try to ensure that RuPay finds a much bigger market and acceptance in several parts of the world having a good presence of Indians and their preferred educational and tourist destinations. (IPA Service)