Indian Political Parties Should Ensure Health As A Fundamental Right 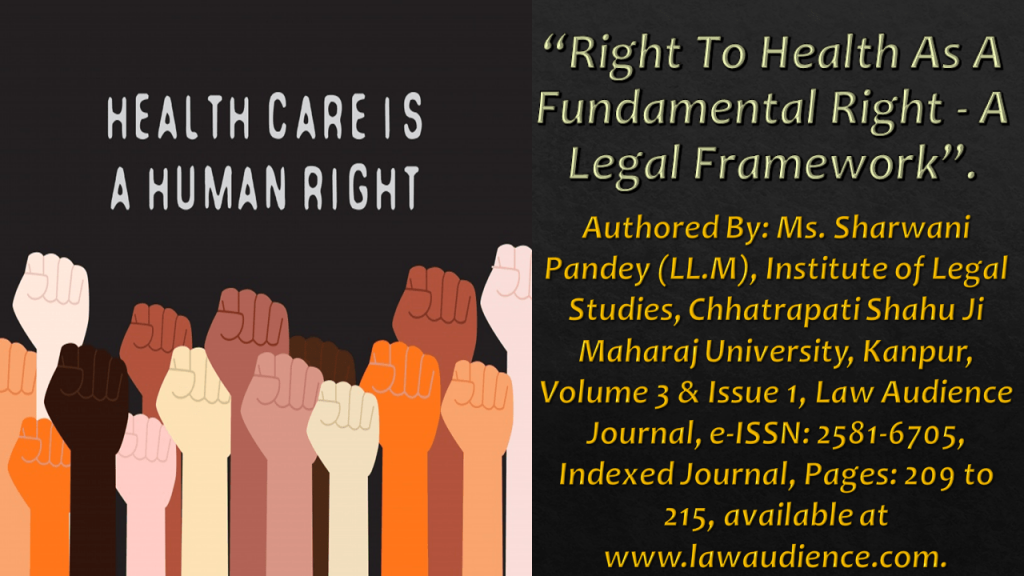 Democracy is a means to decide how we want to be governed. To woo the voters political parties therefore decide their agenda which they feel will fetch them votes to reach the seat of power. They give populist slogans, whether they can fulfill them or not is another question. In poverty stricken society of our country even little amount of relief has lot of meaning. Education and health are assets for any society and form basis for inclusive growth and over all development.  But they have not been given due attention by successive governments.

Health is the primary requisite for any person to work and contribute in man-days to full capacity. An Infant Mortality Rate (IMR) of 27.7 deaths per 1000 live births and under 5 year mortality rate of 32 and Maternal Mortality Rate (MMR) of 103 per 100,000 live births are worrisome. It is a shame that in the Global Hunger Index, India stands at 107 out of 120 countries. Because of poor planning and infrastructure the diseases like Malaria, Tuberculosis, Cardiac illnesses, Diabetes, Cancer etc. got ignored during the COVID Pandemic, even though as per many independent estimates we lost 25 to 40 lakh people due to COVID. Therefore instead of piecemeal approach we need comprehensive healthcare for or citizens.

The insurance based healthcare system introduced after the Neo-liberal economic policies, has failed to deliver comprehensive healthcare to the people, instead it has become means to divert money from the public funds to the corporate sector. All the insurance systems including Ayushman Bharat cover only the indoor care, while nearly 70% of the out of pocket expenditure is on OPD care. Only the ESI scheme, ECHS and CGHS cover both outdoor and indoor care to the patients. The government instead of owning responsibility for the healthcare is outsourcing various healthcare centres to the private sector. There is effort to bring government hospitals including district hospitals, Primary Health Centres (PHCs) under private control. This will further devoid the quality health care of low and middle income group people.

Even worse is that unscientific and non-evidence based methods of treatment are being promoted. Cow urine, Cow dung and Ramdev’s Coronil had been recommended as treatment of various diseases including the COVID-19 by the obscurantist forces with the support of the then Union Health Minister Dr Harsh Vardhan, who is an ENT surgeon trained in the modern scientific medicine. It would be naïve to believe that the Prime Minister had no knowledge of all this, as no decision under this government is taken without the knowledge of PMO.

Out of pocket spending on drugs comes to nearly 67% of the total expenditure on health. But till date we lack a rational Drug Policy. As a result the Pharmaceutical companies are making huge profits. To put a check on the high trade margins in the sale of drugs the government had appointed a committee which submitted its report in December 2015. The committee had recommended capping of the trade margins. But no steps have been taken even after seven years.

It is therefore of utmost importance that state owns the responsibility for health with commitment to evidence based scientific healthcare. Unfortunately health is not a priority agenda for any political party. Dr Tejbir Singh, former Director Health Services Punjab in a seminar organized by the Indian Doctors for Peace and Development (IDPD) had pointed out that healthcare should be made justiciable; For this healthcare has to be declared a Fundamental Right. After reviewing the constitution of various political parties, he said that it is unfortunate that no political party has asked for health to be a fundamental right. The BJP has advocated expansion of health insurance system. The Congress has demanded right to health act and doubling of public health expenditure. The left parties have demanded to raise the public expenditure on health to 6% of the GDP. The Aam Admi Party is advocating Mohalla clinics. The Communist Party of India (CPI) has lately resolved to demand Health as a Fundamental Right. This is a welcome step which all political parties should follow.

The political parties should strive for a comprehensive healthcare to all for which they must come forward vociferously to demand health to be declared fundamental right. This should become their core agenda. Public expenditure on health should be increased from the present 1.28% to 6% of the GDP; All drugs, vaccines and medical devices should be produced by Union and state Governments through Public sector units to ensure drugs security without profit as the sole motive. Active pharmaceutical ingredients should also be produced by public sector units to ensure self-reliance in drugs production.

Medical education should be imparted in state sector only. Instead of Mixopathy an evidence based Scientific method of medical system alone should be permitted. Good nutrition should be ensured through proper measures under the Food Security Act. In schools Mid-day meal, free breakfast scheme should be provided in all states.  Universal Immunization Programme (UIP) should be expanded to adults. Provide Human Papilloma Virus (HPV) vaccination for all girls and young women to prevent Cervix cancer. Newer vaccines like influenza vaccines, Pneumococcal vaccine, zoster vaccine should be included in Universal Immunization Programme.

Political parties go by the public opinion. It is therefore for the civil society to be more vocal on the issues of health for all and health a fundamental right and force every political party to take Health to be Fundamental Right as their priority agenda.  (IPA Service)