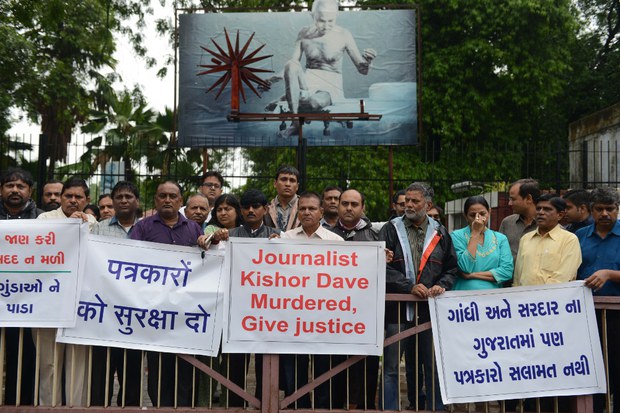 The Indian Journalists Union has expressed serious concern over persistent attacks on media and the shrinking space for independent media in the country.

In a resolution passed at the two-day plenary session at Chennai last week, the union appealed to the democracy loving people  in the country to raise their voice against the unabated attack on media and media persons by both state actors and unlawful and vested interests enjoying the state patronage. . The resolution further added that safeguarding the media is critical to sustain the democracy and it is the sacred duty of every citizen to protect and stand by independent media.

Over 400 journalists from various parts of the country including from far away Ladakh attended the two day conference.

Earlier in his presidential speech Mr. K. Sreenivas Reddy said “For all of us…for working journalists in the country this is a difficult phase. We are passing through testing times. We are facing various challenges professionally and our job security is in peril. Journalists in India are also facing security issues for their professional work. As far as the wage revisions and welfare measures are concerned the less we speak the better. The last wage board for working journalists and other news paper employees for wage revision was in 2007 and the recommendations of that wage board headed by Justice Majithia were yet to be implemented by many establishments and the state governments have not been acting responsibly.’

Reddy   said “For doing their professional duty and defending media freedom and while exercising their right to freedom of expression a number of journalists were put behind bars in various states. In this sacred duty some others paid with their lives. In this atmosphere of growing intolerance journalists are increasingly facing threats of intimidation and physical harm. Attacks against journalists have become a common thing. This situation poses a very serious danger to democratic society’.

“Though journalists have been hailed as covid warriors by none other than the Prime Minster and several Chief Ministers and governors, in reality the fraternity received scant support in terms of covid relief. On the front of wages implementation of revised wages recommended by wage board and duly notified by the governments remains a shameful exercise with both managements and the governments arrogantly neglecting their responsibility. In electronic media payment of wages position at lower and mid level is very pathetic. It is high time that the Union Government appointed a Media Commission to go into the whole scenario of media in the country.’ , the IJU president said.

The conference was inaugurated by L. S. Herdenia, one of the founders of the IFWJ and also of the IJU. At the outset he said “freedom is in peril. This does not apply to media alone but to the entire country. According to him, the worst calamity affecting print media relates to the repeal of the Working Journalists Act, along with the Working Journalists (Fixation of Rates of Wages) Act. These laws were repealed without incorporating corresponding special provisions governing the working conditions, wages and special privileges of working journalists in the Labour Codes Bill, greatly impacting them and their independence, essential for sustaining a vibrant democratic polity in the country. After passage of the Labour Code, no working journalist or editor can approach a court to challenge his or her arbitrary and illegal termination under the Industrial Disputes Act. As the four Labour Codes greatly endanger the freedom of expression and independent journalism, the working journalists and their organisations should unitedly defend their rights and freedom with all their might.

In his report, secretary general of IJU Balwinder Singh Jammu noted “Journalists who became jobless due to retrenchment got neither any compensation or any immediate job and they had to undergo a difficult time. A few journalists reported to commit suicide due to depression.

“Credibility of major newspaper came under fire with their anti journalist policies during the pandemic. On the other side, medium and small newspapers could not get sufficient government-private advertisement support due to changes in policy. These media houses are still facing the problems. .

“In future, we need to come up as much stronger Union to counter the attacks on the journalists that we have been watching continuously for longer time.

“I would like to say that it’s a positive and encouraging sign that the unions that have left us sometimes back have again come back. We have two more new state unions formed in Maharashtra and Haryana which are now in the fold of IJU. Another good news was that journalists in Chhattisgarh and Rajasthan have also met with the leaders of IJU and adhoc committees have been formed  and they have started the process of registration of unions. Their delegations are attending the plenary.”

The Plenary also passed a resolution demanding national law for protection of journalists and media establishments. The resolution said “This Plenary regrets that the Union Government has not taken any action so far on IJU’s repeated appeals for the enactment of a national law to ensure safety and protection of working journalists and media establishments with payment of adequate compensation to their families in case any tragedy befalls on them. Even the Maharashtra Government which accepted the demand and came out with a special law. The Maharashtra Media Persons and Media Institutions (Prevention of Violence and damage or loss to property) act 2017 which was notified in 2019 for the protection of journalists and media establishments is not covering it adequately. We thank them for bringing the first act to protect journalists in our country and request the present government to improve it.’

The Plenary/ Delegate session of IJU, called upon the Central Government and all other State governments not to wait for the occurrence of the next big tragedy but to take urgent steps to enact a law to ensure the safety and protection of working journalists and media establishment with the payment of adequate compensation to the families of working journalists in case of any abuse on their duty and fundamental rights. (IPA Service)

Follow us on
Up Next: Green Energy – An Antidote For Inflation And Economic Uncertainty
Posting....