Indian Constitutional Ethics Including Secularism Are Under Attack 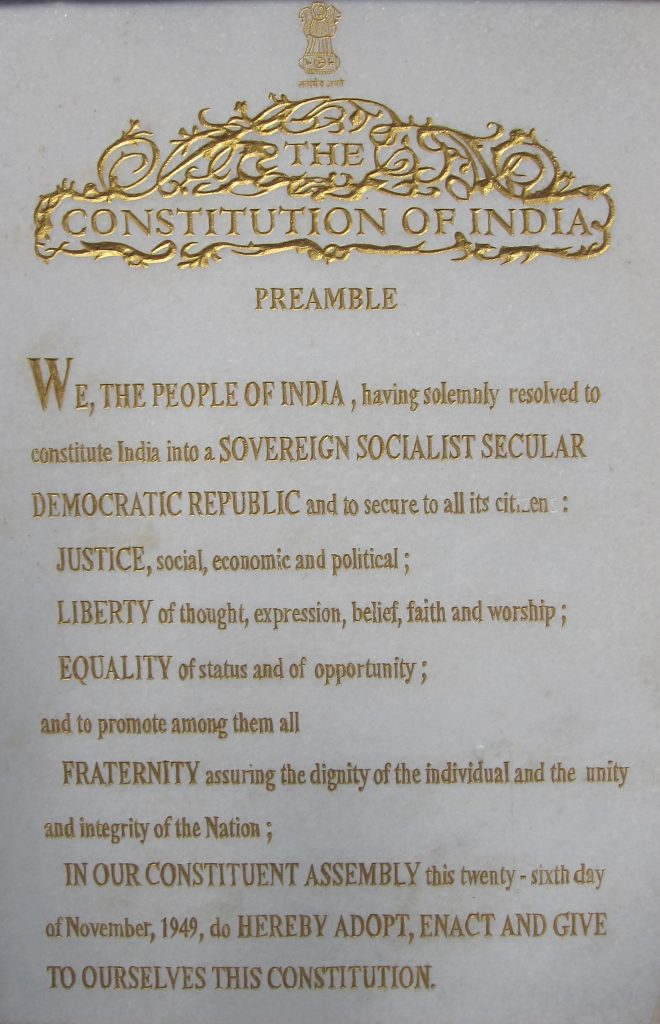 Narendra Modi ever since he came to occupy the office of prime minister has been insinuating worst nature of jibe against Jawahar Lal Nehru. This is the greater part of the RSS design to portray Nehru as an enemy of Hindus. RSS for pretty long time has been presenting secularism as a decadent concept and idea.

RSS knew a vibrant secular idea and philosophy will be a major stumbling block in the growth of rightist philosophy and ideas. This is the reason that it systematically and planned manner has been attacking Nehru.

The current political and cultural crisis that India has been in owes to indifference of the secular forces to strengthen and purgative the ill ideas and notions that has started afflicting the secular ethics and values and keeping enlightened the spirit of secularisation of the body politics.

The decline of the secular morality primary owes to the lack of conviction and commitment to the cause by the secular forces. It cannot be denied that that the secularist became content with the achievement of Independence. They forgot their basic responsibility of strengthening and preserving the secular fabric of the secular country.

With Indira Gandhi incorporating secularism in the Constitution, these people perceived that no anti secular forces even the rightist forces could pose any challenge to their hegemony. They were fundamentally wrong. Secularism has never attained the character of an institution. Its character became more fragile and weak in the massive inflow of foreign investment.

A free India was the pasture of their unfulfilled dreams. They maintained the façade of being of secular in personal lives but in reality they divorced secularism in their personal lives. The reforms provided them keep aside their secular values.

Look at the vertical rise of their lives. No one condemns their craving for economic and social empowerment, but they should have adhered to the basic secular values. They promoted and patronised the crony capital. Only an ideological weak person will resort to this. A large number of bodies and forums with huge financial resources were opened as the centres to rectify and promote secular. But unfortunately the facilities were misused for self-promotion.

Within some years of Independence a mad rush was witnessed to have foreign benefit on the pre-test of exchange of ideas as to how to strengthen secularism. The logic of exchange of intellect property and strengthening and promoting education became the key factor. But sorry to say that these two were used to promote the interest of the protagonist of secularism in India. On the huge foreign financial support they build their own empire. They allowed them the secular to grow on its own.

With the rise of the rightist forces these leaders and elements got scared as they are unable to evolve mechanism to counter it muster courage to fight. They were flabbergasted. With these forces enjoying the patronisation on centrist and neo liberal centre government started feeling scared of the safety of their gains. I am not criticising a leader deserting the Congress. A direction less party having no national vision and perspective, and incapable to fight for the ideological values cannot think to uphold the national ethos and aspiration of the people. A disconnect with the people started gradually taking place turning the party claiming to represent secular ideas worthless. The situation received a major jolt and severe decline with the leadership failing to purse the corrupt elements from the organisation. This shaken the confidence of the secular elements. They lost trust in the leadership.

Obviously the leaders are free to search for a new operational ground. Ironically these desertions have been devoid of any rational and search for self-ideological identity and any attempt to rectify the rot. The basic reason has been the leaders utterly lacked ideological commitment and used the available situation to accumulate wealth and join the rank of capitalists, of course behind the veneer of being a hardened secular.

Their fake pretentiousness was in fact so week that they failed to withstand the onslaught of the right attack and they got shattered. In their pursuit to protect their fake image  they continued to uphold secularism, but in reality they searched for some alternate to preserve their class interest. In the process they accused of secular being not relevant.

It cannot be denied that L K Advani had rightly pointed out this misconstrued smug practice and described it as pseudo-secularism. The so called secular forces instead of finding and the mechanism to clear the weed pushed it under carpet. By doing this they inflicted greatest damage to secularism. They not only weakened the base and strength of secularism, but maligned its character and image. These people ruined it. These people turned the hard core of practitioner of crony capital.

Some time back the group of 23 senior Congress leaders had raised the issue of lack of functional democracy. But sad enough the Congress high command instead of taking it seriously to start the process of rectification. Instead the leadership took them as the enemy of the party. But the fact was the leadership look at them as the baiters who Rahul Gandhi who according to them dislike his promotion. But it was entirely wrong notion nursed by the party chief. This group has already unravelled the truth that secularism was under threat,

It is a sad that Congress instead of relying on the ground level secular element relied on the neo rich people and youths who had no practical relation with the secularism and lived in their world of make believe secularism. Since they came from the neo rich and aristocratic family they lacked the perspective and vision as how to connect with the people, They had their liberal perception which was secularism for them. They nursed contempt for the people who did not belong to their social and economic camp. For them Congress was a social club and no a platform to promote secularism and fight for the common man. For them political was twitter having no connect with the people.

Ashwini Kumar who quit the party a couple of days may join BJP or keep aloof from active politics, but he rightly pointed out that they have to wait endless for appointments with senior leaders to discuss party affairs is a very diminishing experience. This is the most disgusting development. Why a democratic and centrist party shut its door on the face of interaction? It is really sad to witness that the party has virtually become a Monday club where ideology has been relegated to the extreme corner of the room. It has ceased to be the mouthpiece of national aspirations and is failing to provide a transformative leadership to the nation. (IPA Service)

Amit Shah’s Assurance To Channi To Probe Kejriwal Is Nothing But Bizarre
Posting....