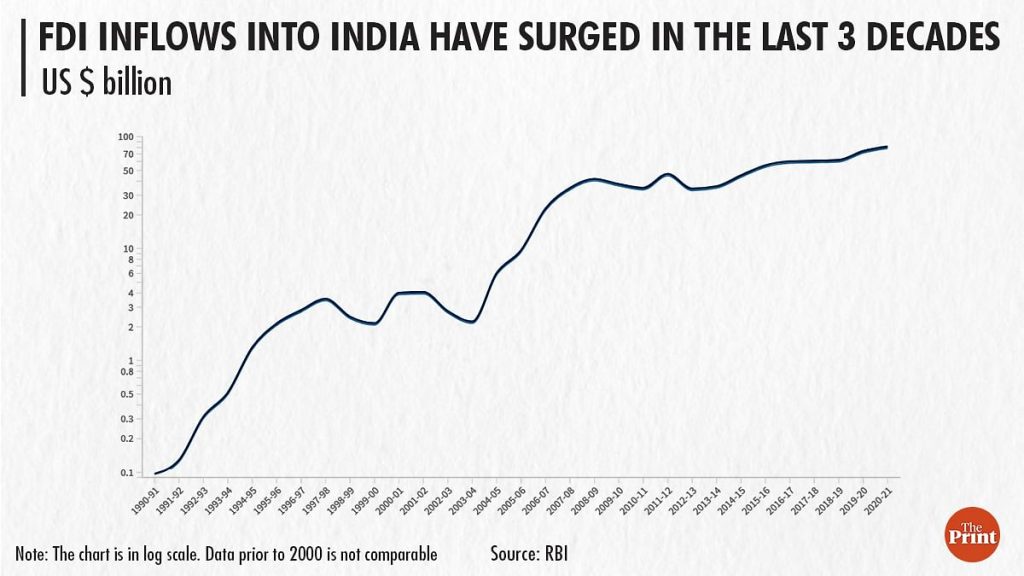 Global investment banker Morgan Stanley may have predicted the current decade as India’s following economic slowdown in China. But, the Indian economy is not growing as fast as it should. Large foreign direct investments (FDI) seem to be fighting shy of India’s highly price sensitive economy. The complexities of an uncertain and volatile regulatory landscape continue to be an issue. Potentially, India could become a factory to the world. However, the government is not doing enough with regard to the ease of doing business. Land acquisition with clear titles to build large manufacturing ventures continues to pose a problem. The costs of energy and transportation are high. In many states, contractors need to deal with local political mafiosos. Although FDI in manufacturing has lately increased, the world’s fastest growing large economy is yet to attract many large multi-billion-dollar investment offers from big transnational corporations to make the country a global manufacturing hub. The global investment banker’s report appears to be somewhat over-optimistic about India’s immediate economic future.

Morgan Stanley’s latest message to CEOs and CIOs estimates that ‘The New India’ will drive a fifth of global growth through the end of this decade. Supporting these factors are: 1) Our (Morgan Stanley’s) multipolar world thesis and India’s rise in the world economy, 2) India’s commitment to the Paris Accord (reducing emissions intensity of its GDP by 45 percent by 2030 from its 2005 levels), 3) major investments in terms of both dollars and institutional infrastructure to leverage India’s biometric identity system, Aadhaar, and 4) government policies targeted at lifting the share of profits in GDP, with a concomitant positive effect on investment. Consumer discretionary spending is gaining share in total consumption, as per-capita GDP has crossed the important US$2,000 mark. India’s income pyramid offers a unique breadth of consumption, in our view, with the top ….The pandemic only enhanced India’s attractiveness as the office to the world.

New developments – such as the trends outlined in Morgan Stanley’s multipolar world thesis, along with government incentives – are allowing India to gain traction as a factory to the world as well. Investment in services and manufacturing will come from foreign direct investment and a large increase in private domestic investment….  India’s per-capita energy consumption is likely to rise 60 percent, on our estimates, to about 1450 Watts per day in the coming decade, with two-thirds of the incremental supply coming from renewable sources. We believe this will 1) positively impact India’s terms of trade, 2) entail about three-quarters of a trillion dollars in energy capex, 3) eventually reduce headline inflation volatility as the imported energy share of GDP declines, 4) lower fertiliser subsidies, 5) improve living conditions, and 6) create new demand for solutions such as electric vehicles, cold-storage chains, and green hydrogen-powered trucks and buses.

India’s top end are spending like the richest in the world and the bottom end are still relatively poor. The number of households earning in excess of US$35,000/year is likely to rise fivefold in the coming decade, to over 25 million. The implications are: 1) GDP is likely to cross US$7.5 trillion by 2031, more than double the current level, 2) a discretionary consumption boom, and 3) 11 percent annual compounding of market capitalisation to US$10 trillion in the coming decade. Morgan Stanley’s message said: “Key risks to our view include a prolonged global recession or sluggish growth, adverse geopolitical developments, domestic politics and policy errors, shortages of skilled labour, and steep rises in energy and commodity prices.

It may not be wrong to note that Morgan Stanley’s optimism on India’s economic growth is not quite in keeping with the reports and observations of international agencies such as the World Bank, UNCTAD and Trading Economics global macro models. The global investment banker seems to have also gone wrong on India’s GDP calculations and forecast. According to the World Bank, India’s GDP in 2021 was worth US$ 3.173 trillion. Interestingly, the Trading Economics global micro models and analysts projected India’s GDP to “trend around 3000.00 USD Billion in 2023 and 3450.00 USD Billion in 2024.” There are also variations in the forecast of India’s GDP growth. While the IMF has cut India’s 2022-23 growth forecast to 6.8 percent, UNCTAD, a top UN agency, said India’s economic growth will decline to 5.7 percent in 2022, citing higher financing cost and weaker public expenditures. It expects the GDP growth rate to fall further to 4.7 percent in 2023. UNCTAD’s annual report said the world economy is expected to grow 2.6 percent in 2022. In fact, it may be too early to celebrate India’s economic success through the decade.

Last month, the World Bank had cut its 2022-23 real gross domestic product growth forecast for India to 6.5 percent —from an earlier estimate of 7.5 percent — while warning that spillovers from Russia’s invasion of Ukraine and global monetary tightening will weigh on the economic outlook. In its biannual report on South Asia, the World Bank said: “Private investment growth is likely to be dampened by heightened uncertainty and higher financing costs.” India’s Reserve Bank too has lately cut the economic growth projection for the current fiscal to seven percent from 7.2 percent estimated earlier because of extended geopolitical tensions and aggressive monetary policy tightening globally. Morgan Stanley is clearly above all others in projecting India’s economic growth prospects and national income arithmetics. Currently, India’s economy is grappling with persistently high levels of inflation and unemployment. The inflation rate has been running above the top of RBI’s tolerance band since the beginning of the year and is set to do so for the rest of 2022. The rising imports and falling exchange value of Rupee are bound to raise the trade deficit during the year.

However, the most positive aspect is that   Indian economy is unlikely to face a demand recession any time soon even though the US and Euro Zone are headed towards recession. The Indian economy is not so coupled with the global economy. And, notably, domestic inflation has not contracted the consumer demand — from automobiles, housing to wage goods. On the contrary, rising vehicle prices and high petrol and diesel costs have little impact on auto demand in India. The country is expected to be the world’s third-largest automotive market in terms of volume by 2030. Presently, the automobile industry contributes 7.1 percent of India’s GDP and 49 percent of its manufacturing GDP. The EV market is expected to grow at a CAGR of 49 percent between 2022-2030 and is expected to hit 10 million-unit annual sales by 2030. The economy has a strong appetite for large investments in manufacturing and physical infrastructure. The government at the Centre and states need to work hard to induce large foreign direct investors to take advantage of the situation to grow together.  (IPA Service)