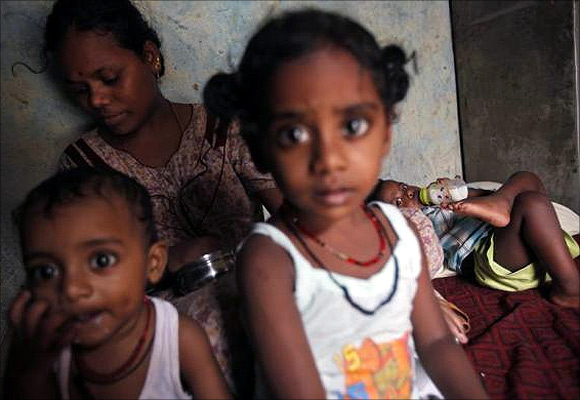 The point estimate was 40.3 per cent during 2019-21, which was even worse than 37.9 per cent of 2005-06, and only little less than 42.4 per cent during 2015-16, but remains unacceptably high exposing the falsity of the good performance claim of the Modi government during the last eight years of rule. The lower limit of severe child food poverty in India during 2019-21 was 39.7 per cent while the upper limit was40.8 per cent.

The UNICEF data covers the children of age group of 6-23 months of age. The point estimate for 2019-21 of babies from 6 to 11 months is 57.1 per cent with lower limit 56.1 per cent and upper limit 58 per cent. These children are the worst sufferers, and their situation somewhat improves as they advance in age.

In 2022, the number of children suffering from sever wasting in the 15 countries worst affected by the present global crises has increased at an extraordinary speed: one additional child with sever wasting every single minute, Ms Russell said.

Children in poor and rural households are more vulnerable to severe food poverty which exposes the inequalities between the richest and poorest families.

In this situation, UNICEF calls for bolder action and greater accountability to end child food poverty. Together with development and humanitarian partners, national and international civil society and non-governmental organisations, and the private sector, and governments must mobilize the food, health and social protection systems to deliver nutritious, safe ad affordable foods and essential nutrition services to guarantee every child’s right to food and nutrition everywhere.

To end child poverty, UNICEF says, we must shape food systems to be more accountable for making nutritious food available and affordable to families with young children; leverage health systems to deliver essential nutrition services to young children and their mothers, prioritizing those most at risk; design protection systems that are responsive to the food and nutrition needs of the most vulnerable children and families; and strengthen nutrition governance – nationally and globally – to eliminate child food poverty, including in fragile and humanitarian settings. (IPA Service)