In UK, Public Sector Workers Are Striking Against Austerity 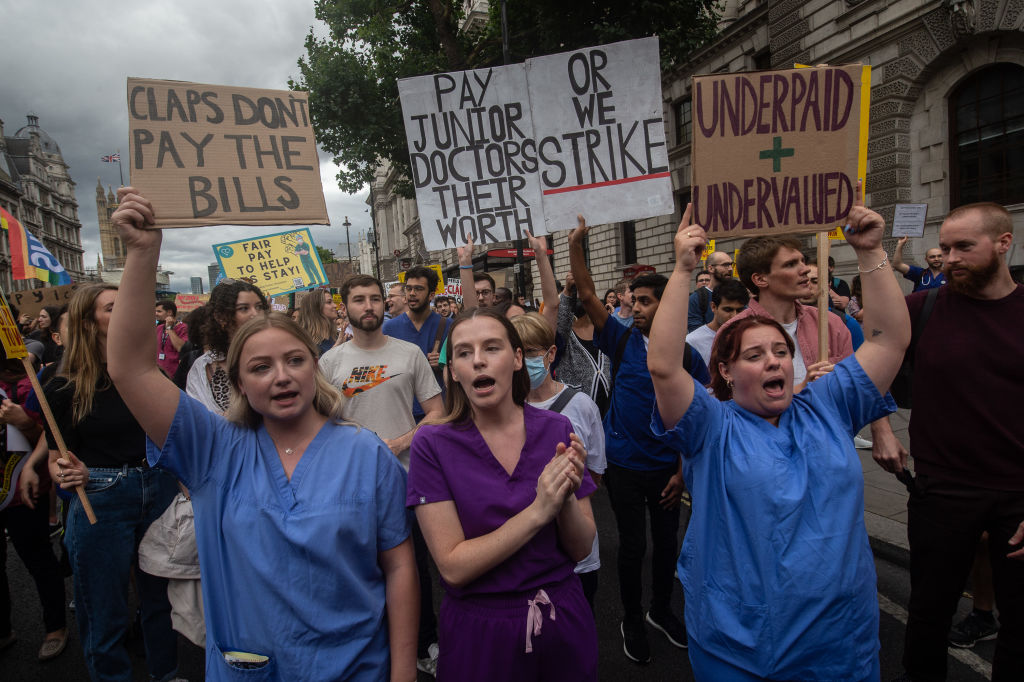 Wage growth in the United Kingdom over the past twelve years has been dismal. In the period after the financial crisis, the country experienced the longest period of wage stagnation since the Napoleonic Wars. Then the pandemic hit, and wages collapsed as unemployment spiked.

As the lockdowns ended, workers were told to expect a respite as the labor market tightened. With immigration having fallen and millions of people having left the labor force thanks to ill-health, the ratio of job seekers to vacancies improved significantly over the course of 2021.

Economists expected this imbalance between demand and supply to lead to a sharp increase in wages. Many started to panic that the so-called great resignation was going to force companies to start paying their workers a living wage. But then inflation began to rise much faster than wages, erasing any gains that had been made thanks to tighter labor market conditions.

At this point, politicians and business leaders became obsessed with the idea of a “wage-price spiral” as workers in a tight labor market demanded pay increases in line with inflation. The governor of the Bank of England even stepped in to request that workers exercise pay restraint (this from a man who earns half a million pounds a year).

Yet instead of a wage-price spiral, we ended up in a deep cost-of-living crisis, in which millions of people struggle to make ends meet.So why hasn’t a mass exodus from the labor force led to higher wages, as many economists feared? The issue is that wages aren’t determined solely by the abstract forces of supply and demand — they’re determined by workers’ economic and political power.

The state of the labor market naturally has an impact on this power. If there are fewer workers available for the same number of jobs, then workers have more leverage with respect to their current or potential employers. But the labor market has been relatively tight for many years now, and yet the UK’s performance on pay has been abysmal. Why? Because the UK economy is systematically rigged against working people.

While levels of unemployment are relatively low by historical standards, this conceals a great deal of hidden unemployment. Many workers are underemployed — they’d like to work more hours but are unable to. These workers are often not in a strong position to ask for a pay rise.

Others are employed in the gig economy, or are falsely self-employed, meaning their hours and pay are subject to significant fluctuations. These workers are in a particularly weak position relative to their “employers,” which is of course exactly why these forms of work have flourished in recent years.

Still more simply feel too insecure to ask anything of their employers. Paradoxically, low earners often feel less able to demand pay increases as they and their employers both know that they cannot leave their jobs without suffering significant financial hardship. Union density across the UK also remains low, meaning millions of workers are facing their employers on their own — rather than as an organized group.

And then there’s the impact of austerity, which both directly and indirectly contributed to the problem of low pay.The indirect impact of austerity on wages runs through investment. Lower investment in the public and private sectors constrained both jobs growth and productivity, each of which have an impact on wage levels.

The direct channel runs through public sector pay. The public sector accounts for a significant share of employment in the UK: the National Health Service alone is the country’s single largest employer. Austerity created permanent downward pressure on the public sector wage bill, and wages in the public sector have grown more slowly than those in the private sector every year since 2010, other than during the pandemic.

The Conservatives attempted to present their cuts to public sector pay as a way to shrink the meddling bureaucracy obstructing the operation of the free market. But austerity hasn’t shrunk the UK public sector’s bureaucracy — it’s just made it less efficient. And, in any case, the salaries of senior bureaucrats are much more likely to have been protected than those of doctors, nurses, and teachers, who have less power relative to their employers.

Both public and private sector employees are experiencing real terms pay cuts when accounting for inflation, but it’s much worse for public sector workers. No wonder frontline public sector workers, who have already had to deal with a decade of austerity and the pandemic, are leaving in droves.

But public sector workers aren’t just leaving their jobs. Many millions more are choosing to fight back instead. And in doing so, they’re providing a much-needed example of how to resist exploitation to their private sector comrades.

Already, the number of days lost to strike action in the UK is the highest it has been in more than a decade. This increase is mostly attributable to strikes organized by unions representing public sector workers, or workers in formerly nationalized sectors like mail and rail.

Nurses, teachers, and many other key workers are coming together to fight back against a government that would have us clap for them instead of paying them properly. With a wave of strikes planned for the winter, the Conservatives are going to struggle to keep the country running without coming to a deal with the major public sector unions.

The government claims that protecting public sector workers from another real-terms pay cut is unaffordable. Yet the Conservatives were quite happy to spend billions during the pandemic bailing out massive corporations and handing dodgy contracts to their friends in the private sector.

Granting public sector workers the wage increases they deserve is not unaffordable. The government has demonstrated that it has the capacity to pay for its priorities while lavishing cash on big business, banks, and landlords during the pandemic.

And raising wages for some of the lowest paid in society would give a much-needed boost to demand as the UK hurtles towards a recession, especially if accompanied by price controls and tax increases for the wealthy to moderate the impact on inflation.

But there is another reason Sunak and Hunt are unlikely to increases wages for public sector workers. The government just doesn’t want to give in to the first real show of strength by British workers in decades because it knows that if these workers win, more will follow their example. (IPA Service)

Centre Is Eroding Judicial Freedom By Its Control Over Appointments