In The Gujarat Assembly Polls, It Is Narendra Modi All The Way, Not BJP 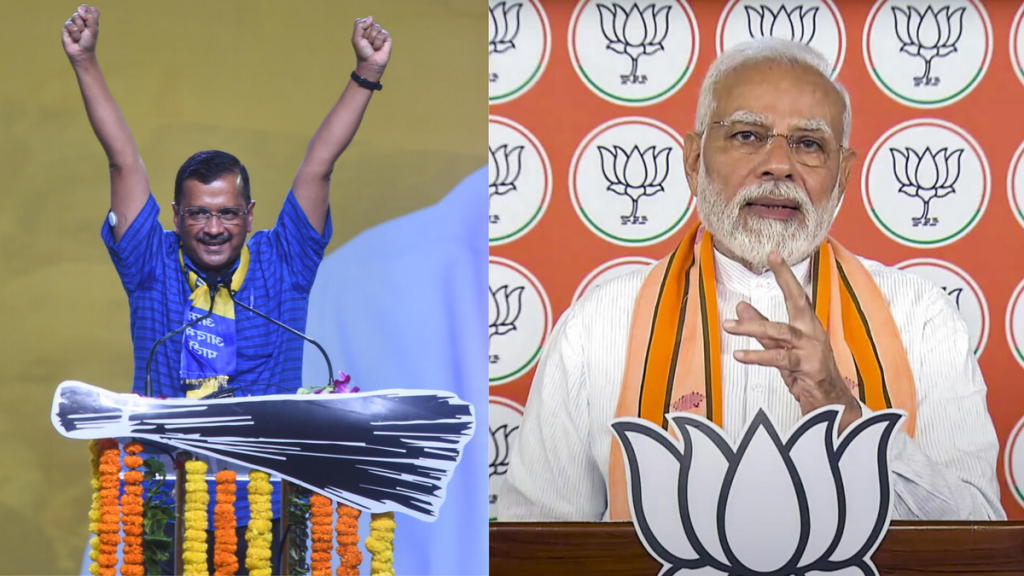 It is a small world, and sound travels far. Otherwise how could America’s  former President Donald Trump echo Prime Minister Narendra Modi?  Announcing his 2024 bid for the White House, Trump said, “This is not my campaign, this will be our campaign”. And television host Sean Hannity gushed, “Great line, if he keeps his focus like this, he is unbeatable.”

Hannity can be forgiven, he can’t get over Trump for as long as he can remember. And Trump, variously described as narcissistic and megalomaniac, would agree there’s nobody as great as Trump. But to return to the topic, did Trump borrow the sentiment from Prime Minister Narendra Modi, who is no less self-important than Trump, his American pal.

November 6, 2022, just after the Election Commission declared the dates for the Gujarat elections, Modi stood at an election rally and coined the slogan “Aa Gujarat, maibnavyuche”, meaning “I’ve made this Gujarat”. He sounded like Trump and acted like Trump, exhorting Gujaratis to teach a lesson to all those who have been “defaming Gujarat for 20 years”.

Then, he said “Aa Gujarat, maibnavyuche”, and you wondered why? Modi spelled it out: “Every Gujarati, be it an adivasi or a fisherman, a villager or a city dweller, is full of confidence today. That is why every Gujarati says ‘I have made this Gujarat’. People have built this state with their hard work.”

It is the “our campaign” which made Trump sound like Modi and vice versa. Modi and Trump are two of a kind. Trump announced his 2024 bid and he was measured and “focused”. The reality is Modi spoke first, about all those who “defamed Gujarat for 20 years”, Modi’s victim card out in the open. Trump in his turn railed against those who made America look bad again after he left.

In his own manner, Modi too was focused in his quest to retain power and extend the Gujarat anti-incumbency. But out of a sense of insecurity or indignant outrage, Modi gave the impression he wanted the Gujarati to take note of those who, according to him, have been “defaming Gujarat”, and not forget or forgive the insults, imaginary or real, heaped on Gujarat and the Gujarati.

Of course, it made sense. AAP and Arvind Kejriwal, everybody including the so-called “Lutyen’s media”, the Congress, all of them have been “defaming Gujarat for 20 years”, and they ought to be taught a lesson. Finally, the time had come to exact revenge, by handing victory to those who “made Gujarat”, Modi’s slogan “Aa Gujarat, maibnavyuche (I have made Gujarat)”.

It’s like going back to the original; why even look at the pretender, Florida Guv Ron Desantis! Similarly? Why look further when there’s the “I have made Gujarat” still available? Modi wants to give every Gujarati a role in the ‘Avengers’ Gujarati version, every Gujarati put on the masks and capes, become superstars, and turn the tables on those who “defamed Gujarat for 20 years”.

Ask a shaman, and he will say it is “powerful medicine”, the concoction of hurt pride and sweet revenge. The marauding army of freebies was at the gates, and it didn’t matter whether they were the enemy of 20 years before, or new ghouls from the dark out-of-state dungeons, all it mattered was not to let them sweep to power, with a broom, or an open hand.

This Modi is not the Modi of 2013-14. Today’s Modi is old wine in old bottle. And, 20 years later new labels have appeared, of various proof strength. So it has become crucial to convince the electorate that aged wine is the best wine. Therefore, the “20 years”, “defame”, “sweep them out of the state” and “Aa Gujarat, maibnavyuche (I have made Gujarat)”.

The opinion polls all favour the BJP, and Prime Minister Narendra Modi himself is predicting a thumping majority for the BJP, with “I’ve come here to beat all records”, but deep down in the heart, there’s a speck of doubt.

So, the messaging is evoking “Gujarati asmita”, and whoever “tried to defame and insult Gujarat in the past” must be “wiped out of Gujarat”, once more. The BJP has been in power since 1998, but all of a sudden, for the first time in 24 years, there is news of a “gang that has been defaming and spreading false propaganda” against Gujarat and Gujarati. How could this happen when in Modi’s own words “Aa Gujarat, maibnavyuche (I have made this Gujarat)”. (IPA Service)