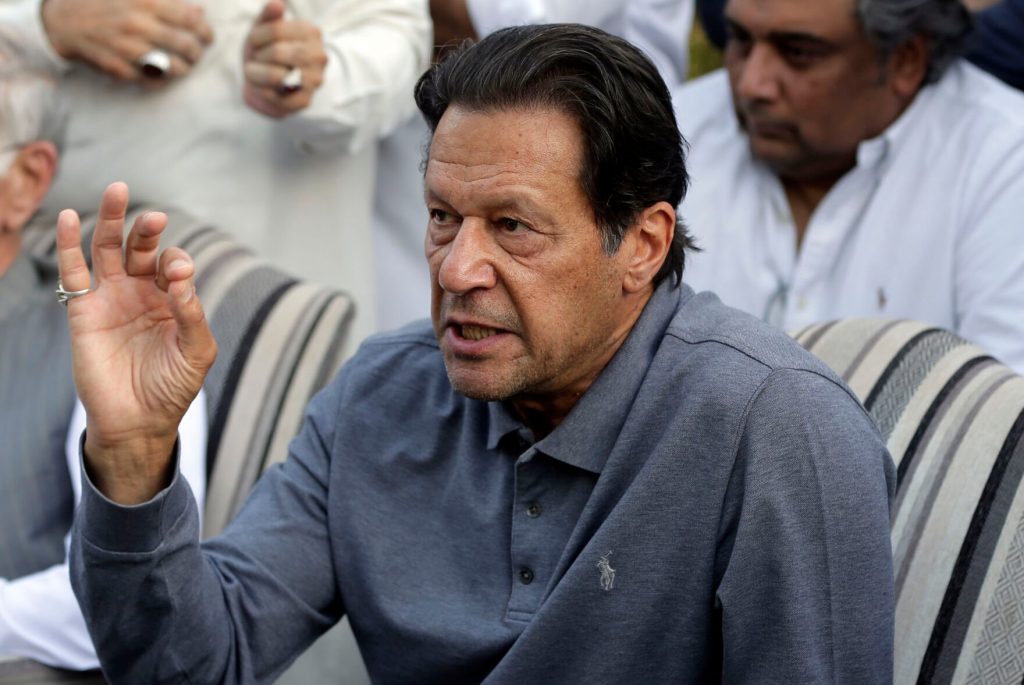 Despite a clear edge in the recent popularity curve in Pakistan former Prime Minister Imran Khan and chief of Pakistan Tehreek-i-Insaf is in political dock again. The Election Commission of Pakistan has caught him on the wrong foot by indicting King Khan and his party of having received overseas fund illegally. The PTI was a “willing recipient” of $2,121,500, the order, concurred by all the three members, stated.

In a 68-page judgment by a three member committee, headed by the chief election commissioner Sikandar Sultan Raja, the Commission accused the PTI of having received millions of dollars in illegal funds from foreign countries like the USA, the United Arab Emirates, the UK, and Australia. The verdict is a sequel to a complaint filed  by one of the founding members,  Akbar S Babar, on 14 November, 2014.

The PTI brass were unnerved by a report published by the Financial Times  that named Arif Naqvi, the founder of the Dubai-based Abraaj Group which for a cricket tournament at Wootton Place, asked  guests to pay between £2,000 and £2,500 each and that the sum, collected therefrom would be  paid to unspecified “philanthropic causes”. Paid apparently to Wootton Cricket Ltd, a Cayman Islands but the lion’s share of the money – if not wholly- went to the PTI coffer. Some £2 million was  paid by Sheikh Nahyan bin Mubarak al-Nahyan, a member of Abu Dhabi’s royal family, according to the FT.

The ECP which has submitted the report to the federal government, has pointed out that receiving and use of foreign funds by political parties in Pakistan is ‘grossly irregular. The ECP in a report in January stated that the Wootton Cricket had transferred $2.12 million to the PTI without revealing the original source of the money. The Abraaj Management Ltd directly transferred $1.3 million to a Pakistani bank account of the PTI in Pakistan.

An enraged Khan in a speech accused the government of ‘trying to control people through the ECP’. He was addressing the protesters gathered outside the ECP offices in various cities of the country via video link. The electoral authority is travelling beyond its jurisdiction and accused it to be in league with the government of Pakistan Democratic Movement with Mohd Shehbaz Sharif of Pakistan Muslim League (Nawaz) as the Prime Minister.  He argued that PTI did not commit any illegality by raising funds for his party from overseas Pakistanis and that the ECP ’wrongly’ interpreted donations from expatriates as foreign funding. “Many renowned people formed their political parties but could not succeed because they did not have sources of funding, he quipped.

The PTI boss termed the PML(N) and the Pakistan People’s Party as two “mafias” which  used ill-gotten money to fund their political propaganda  “because no one would donate their money for political purposes . Defending receipt of foreign funds, Khan said that his party is the first party in Pakistan to have collected money through “political fundraising” and set up a company in the USA as it is illegal in the USA to raise funds without a limited liability company.

The PDM government seems all set to retaliate cashing in on the 68-page verdict of ECP.  It has directed the Federal Investigation Agency to launch an inquiry against the party leaders in order to initiate criminal proceedings against them on the charges of money-laundering and misuse of charity funds for political purposes. This has been disclosed by the information minister Marriyum Aurangzeb who told the media that the government would send a declaration to the Supreme Court first followed by a probe by the FIA for criminal investigations. She referred to the Elections Act, 2017 and the Political Parties Order, 2002 as the basis for the proposed actions against the main opposition   party, PTI.  ‘For the first time in the country’s history, a party has been declared as a foreign-aided party. The decision says that personal accounts were used to receive foreign funding for the party, and the same also makes it a case of fraud’, she alleged

The PTI chairman, according to Marriyum   in his five affidavits, wilfully  signed a  statement, to the best of his knowledge and belief on  the financial position of his and other details were correct and no funds were received  from prohibited sources, as per PPO, 2002.  The PTI sought 51 adjournments, filed 11 petitions with the high court and changed nine lawyers. That means it had sufficient time to respond, she stated .The responses on television channels from the PTI could have been done in the intervening last eight years, she added

The PTI allegedly is yet to declare 16 accounts, though those were opened in the name of Imran Khan, other PTI leaders and employees working in the party secretariat. Which is why the PDM government asked the FIA to launch an independent and impartial inquiry against the PTI leadership and find if there had been money-laundering, misappropriation of funds and misuse of charity funds for political purposes.

The PTI leaders are on an agitational mode. King Khan has termed the present government as an ‘imported government’ through tweets. Other senior leaders such as Asad Umar, Fawad Chaudhry, Shiekh Rashid, Pervez KhattakandAzam Swati have swung into actions demanding resignation of CEC and entire ECP.

Asad Umar in his press meet asserted the ECP ‘is no longer functioning as a state body, but as a subsidiary of PDM coalition.

The ousted premier directly attacked the major parties of the ruling PDM government and its coalescence with the ECP. . “They can enslave the people through the ECP as it can manipulate polls”.  (IPA Service)